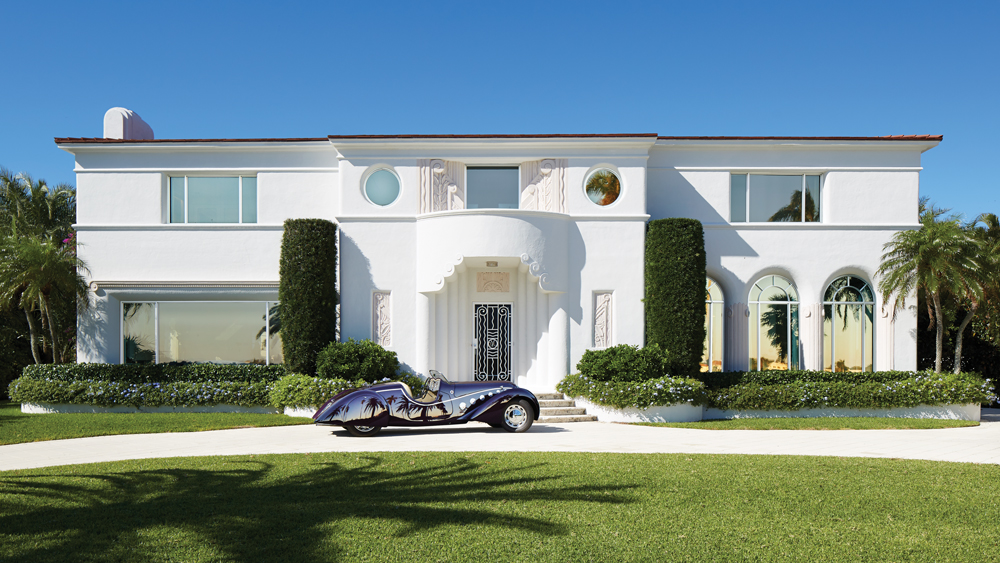 For years on his way to and from work, investment professional Lee Munder drove past a West Palm Beach art-deco mansion designed by Belford Shoumate in 1937. Shoumate was responsible for some 1,500 structures in the area before he died in 1991, leaving behind a stunning architectural legacy including Bermuda, colonial, and art-deco styles that changed the complexion of this affluent, primarily Mediterranean revival–style winter playground.

One day, Munder saw a man putting up a “for sale” sign on the front lawn. Located in the El Cid Historic District and facing the Intracoastal Waterway, the home had been sold only once before, to the Marshmans, who were now divesting themselves of it. “I went by that evening and asked them to take the sign down,” recalls Munder. “It took only two steps inside the house to realize this was where I wanted to live.”

Artist Andrew Moore’s photograph of the staircase in a Havana restaurant hangs above a leather-​wrapped bench. The artwork was acquired through New York’s Yancey Richardson gallery. Designer Peggy Gubelmann of Pembrooke & Ives painted the second-floor landing with double white stripes to reference the nautical theme. The chandelier was designed in the 1970s for an Austrian hotel.  Photo: Courtesy Stephen Johnson

He was already familiar, of course, with the floral and nautical carved reliefs, as well as the home’s Palladian windows and portholes, bowed entry, and other details common to a strain of late art deco that thrived in the Palm Beaches called nautical moderne or streamline moderne. What he discovered over the threshold, however, were exquisite period details: seafoam green–tinted terrazzo floors, banisters showcasing wavy ironwork, a graceful circular stairway crowned by a majestic domed ceiling frieze, and a curved fireplace. Out back were balconies lined with steamship railings, a blue-tile-lined pool, and a scrolled stucco banister leading to a side garden. “The house had such a presence, such an elegant rhythm to it,” says Munder. Certain he and his wife, Laura, a jewelry designer, would be happy there, they purchased Shoumate’s masterpiece. Serendipitously, he notes, the original owners, Ralph and Edna Wagner, had graced the front door grill with a “W,” which the Marshmans “had turned upside down to form an ‘M.’ Since our name was Munder, we didn’t have to do anything.”

Well, not quite. “The house needed some love,” says Peggy Gubelmann, a design director at the New York–based interiors firm Pembrooke & Ives, with whom the Munders had worked on various other projects. “We had to open almost every wall to rewire the home with a Lutron system, air-conditioning, speakers, and all the things we need to live comfortably today. It’s what you don’t see that’s often harder to do.” They also collapsed five bedrooms into three, remodeled three baths, and combined the separate kitchen and dining room into one striking, meticulously detailed space. “It’s like a machine,” says Gubelmann of the room, which has polished stainless-steel cabinets, black granite floors and island, and seafoam-green glass backsplashes.

Sconces original to the 1937 home contrast with a 20-foot-long, ultra-contemporary Universe chandelier from DDC. Nineteenth-​century bronzes adorn three custom tables fabricated by Mary Kuzma Finishing that double as dining tables during dinner parties. In the guesthouse, a bar of recessed lighting on alternating stair risers illuminates the path to a porthole window overlooking the Intracoastal Waterway. The double white stripe is another reference to the home’s nautical theme.  Photo: Courtesy Stephen Johnson

Additionally, Pembrooke & Ives designed a four-bedroom, three-bath guesthouse that drew inspiration from elements of the main residence but streamlined them even further. They also pulled out a spa and cleaned up other remnants of a 1999 alteration in the back of the home.

Aesthetically, the directive was clear. “We did not want to feel like you were in a museum of art deco,” says Munder. “We thought people should feel the way they might have when they walked into the house in 1938 and saw what at that time was edgy and modern and that used new materials.”

A steel LaCornue range set the palette for the kitchen, which features a contemporary pendant from John Salibello, vintage deco flush-mounted ceiling lights from L’Art de Vivre, granite flooring and countertops, and a Charles Edwards ceiling light over the breakfast area. There, Lorin Marsh chairs surround a custom table of LED-lit metal-mesh fabric from Eh Oui sandwiched between glass atop a pedestal by Savoy Studios.  Photo: Courtesy Stephen Johnson

For this reason, explains Gubelmann, “We were cautious to design in a way that emphasized those details and added to them.” That directive manifests architecturally and in the furnishings. In the living room, she says, “We added solar shades. But we designed convex moldings and mirrored soffits above the windows to conceal them and make the room feel more grand and tall.” Curves and radially softened corners, as well as circular motifs, also “relate to the nautical influence of art deco.” A new curved wall in the master bathroom and round ceiling and pendant lighting in the kitchen evoke the maritime themes of portholes and rolling waves.

Some furnishings are authentic to the period. Italian art-deco cabinets flank the living room fireplace. The kitchen’s ceiling lights of flush-mounted nickel and diamond-cut glass are vintage. And the photos in the stairwell are by the fashion and celebrity photographer Horst P. Horst, who shot the designs of his New York contemporary, Coco Chanel, from the 1930s through the 1950s. Others reflect the Munders’ time-spanning and far-ranging tastes. The spectacular chandelier descending the stairwell from the second floor to the first level was originally designed in the 1970s for a hotel in Vienna. Munder found a company that could replace its 70 Edison bulbs with facsimiles incorporating LED technology. A Louis XVI–style globe and an armillary sphere bracket The Philosopher, a circa-1897 Ludwig Deutsch painting above the living room fireplace. Many of the 19th-century bronzes arrayed on a trio of custom tables in the gallery to the right of the entry came from the estate of Bill Blass.

The pool leads to a side garden, down two steps and through a snail-shaped portal.  Photo: Courtesy Stephen Johnson

“The modern pieces we brought in,” says Gubelmann, “were inspired by art deco, but were a contemporary version of the style.” Bespoke living room sofas recall those by Jean Royère, and their companion custom armchairs look like they might have been reclaimed from a plush Parisian 1940s lounge. The specially designed master bathroom vanities are particularly eye-catching, with selenite facing set into polished stainless steel and rounded-corner trim—elaborate versions of something one might have found in a deluxe cabin of a 1930s ocean liner (except that the selenite might have been Lalique glass).

But other pieces are completely of the moment, such as the 20-foot-long chandelier in the gallery, beaded metal curtains in the master suite, and the custom carpet in the living room. The mixture ushers nautical moderne into the 21st century, historically grounded but excitingly fresh. “We wanted the challenge of bringing a gem like this back to life,” concludes Munder. “But we believe that life should be a new one, without distracting from the purity of the original.”