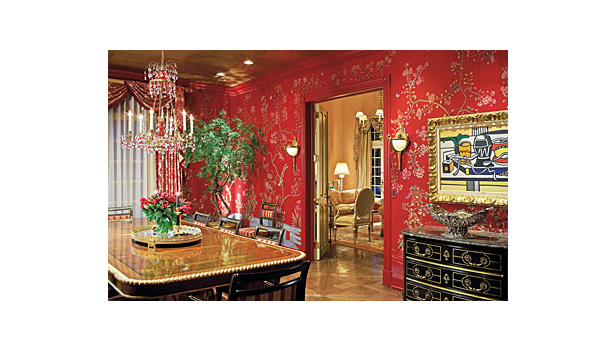 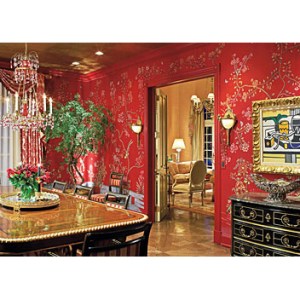 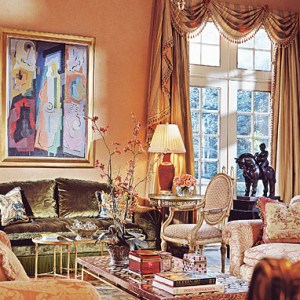 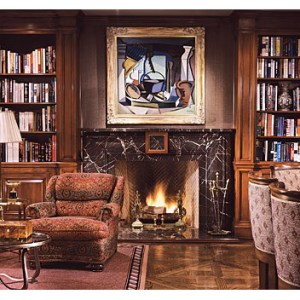 Scott Salvator knows that his designs will not appeal to everyone. “What we do is the antithesis of what’s been popular for 10 years,” he says, contrasting his interiors with the sparser styles favored by many of his peers. “But there’s a market for it. It [requires] a certain type of eye.”

An attorney and real estate investor and his wife, who share Salvator’s predilection for rich palettes and layers of textures, commissioned him and Michael Zabriskie—a director of Salvator’s namesake design firm in New York City—to refurbish the residence that they built two decades ago on a cul-de-sac in northern New Jersey. Although the structure’s carved cornices, ceiling friezes, and moldings recall those of a French manor, Salvator says the dwelling is not ostentatious. “The rooms are not huge.They were nicely proportioned,” he explains. “And [the wife] is very tailored, kind of understated Armani, though she’s not afraid to have some big-scale punch.”

The living room is the most formal space in the residence. “I design according to the way a room is used,” says Salvator, noting that the couple, who are in their 50s and have four children, “use the living room mainly at night and for parties.” He selected linen damask (instead of silk damask) to upholster the two sofas and silk taffeta to dress the Palladian windows at one end of the room. “I like formal structure, but I like more modern fabric compositions,” says Salvator, who founded his firm in 1992. “As a rule I don’t like silk because I don’t like the body of it. Silk taffeta, on the other hand, has body.”

The wife was concerned that the 22-foot ceilings in the room might appear too imposing, so, Salvator says, “I dropped the chandelier to bring the room down to a more human scale.” The stippled, coral-glazed walls complement the Aubusson carpet and provide a sense of warmth. Besides the linen damask sofas, the room contains two smaller seating areas. An Albert Gleizes painting hangs above a green velvet sofa, and a Hans Hofmann work is displayed above a classic gueridon table and two French bergères.

The dining room showcases paintings by Cubist artists Fernand Léger, Jean Metzinger, and Juan Gris. The abstracts are set against a custom-colored Oriental mural that was painted by hand on raw silk. Titled Jiangnan Garden, it was an existing Stark wallcovering design, but “Stark had never done it in red,” says Salvator. Although the couple initially thought the mural might detract from the paintings, Salvator persuaded them that the Cubist works—bold, graphic, and powerful—would benefit from a classical foil. An immense mahogany dining table with Regency-style saber-leg chairs and a 19th-century Russian chandelier—“not some big, drippy Waterford style,” quips Salvator—complete the arrangement.

The space that received the most extensive renovation was the 25-by-25-foot family room. It had been paneled in knotty pine and contained an oversize fireplace and a window and corner cabinet that were positioned awkwardly in the space. “I’d known [the wife] long enough that I was able to say, ‘Look, this room has to be ripped out,’ ” says Salvator. “It didn’t work for how they wanted to use it.”

The designer eliminated the corner cabinet and the quirky window. He also reduced the size of the fireplace and added a Louis XV Belgian black marble mantel (from William H. Jackson) flanked by two 1920s Bagues-style giltwood and crystal sconces. The chair rail–height painted paneling was treated with a taupe steel wool glaze, and above the millwork is a truffle-colored Lee Jofa linen velvet fabric. Salvator crowned the room with a coffered ceiling and, to add shimmer, he placed panels of textured rolled glass, with a French antique silvered finish, behind the sofa. A Jean Royère coffee table and Tommi Parzinger lamps complement the custom Bessarabian carpet.

To create the media room, the couple collaborated with Salvator and Ralph Tarnofsky, the founder and president of Professional Audio Consultants (PAC) in Millburn, N.J. The space, which references Art Deco movie theaters, features a paisley carpet, a chenille sofa, and chenille chairs that are scattered about the room. PAC installed a 12-foot screen, a Marantz VP12S4 projector, and a digital surround-sound system with seven Energy Veritas speakers and a humongous subwoofer. A Crestron touchpad with custom screen graphics and an uninterrupted power source backup, to preserve the memory settings, controls the technology. Four additional theater systems are located in the gym, family room, master bedroom, and poolhouse (which has 16 pairs of speakers).

The professional relationship between Salvator and the couple has lasted 14 years, and the designer attributes this longevity to their similar aesthetics. “The house continues to evolve,” he says, noting that plans are under way to refurbish the master bedroom. “I attract strong people who have a style, a personality.”