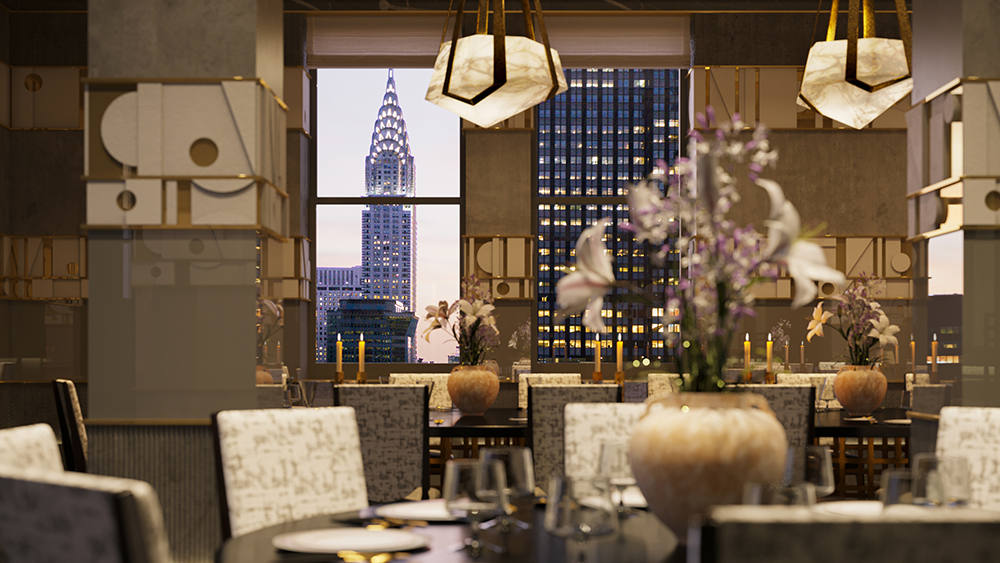 Set on Park Avenue, The Towers of the Waldorf Astoria displayed its theater and dining spaces (included in 50,000 square feet of amenities) on Monday. The luxury condominium sits on top of the iconic New York City hotel, which will reopen in 2023, and houses 375 residences across a total of 53 floors. Available to own for the first-time in the property’s 91-year history, the homes will range from $1.8 million studios to four-bedroom layouts (including two penthouses) that start at $18.5 million.

The Waldorf Astoria has a deep connection to music culture and culinary innovation. First opened in 1931, the hotel became world-renowned for its headlining acts such as Sonny & Cher, Ella Fitzgerald and Tony Bennett. It’s also housed Broadway icon Cole Porter, who wrote “Love for Sale” in his suite, as well as Frank Sinatra while he headlined the hotel’s famous Wedgwood Room.

In honor of that history, residents will be able to host their own private concerts at the new Stage & Screen Theater, which was designed by interior designer Jean-Louis Deniot. The space features a green room, performance stage, Steinway & Sons piano (just like Cole Porter’s) and enough plush seating for family and friends to join in on any events you host. Snacks and drinks can be delivered directly to your seats so you won’t miss a minute of the action.

Speaking of food, the maître d’hôtel, Oscar Tschirky, known as “Oscar of the Waldorf,” invented the the Waldorf salad, as the name would suggest, here. The hotel’s kitchen also regularly whipped up dishes for glamorous icons such as Marilyn Monroe and Grace Kelly and served them in upscale settings designed by architect Henry J. Hardenbergh.

The new private dining room, dubbed the Chrysler Room, can seat up to 20 people, where you and your guests will find striking views of the Chrysler Building across the way. Custom lighting, also designed by Deniot, will accent the dining space in addition to white-oak flooring and modern designs that trail its ceilings and walls in gold.

As you’d imagine, The Towers of the Waldorf Astoria has many other amenities that range from health and wellness to entertainment and business, including an 82-foot pool, fitness center and opulent private spas for men and women.

Four private bars, all named in honor of famous guests, make up its amenity suite alongside a President Library (curated by the White House Historical Association), the Cue Club billiards room and Monte Carlo Gaming Room. The Empire Club, lastly, grants you access to a co-working lounge with fully-equipped private offices, a board room and meeting rooms.

Move-in dates for The Towers of the Waldorf Astoria are not yet available but as the hotel, which underwent a billion-dollar renovation, will reopen next year, you’d imagine residents might be able access their new digs fairly soon after.

Click here for more images of the residential amenities.