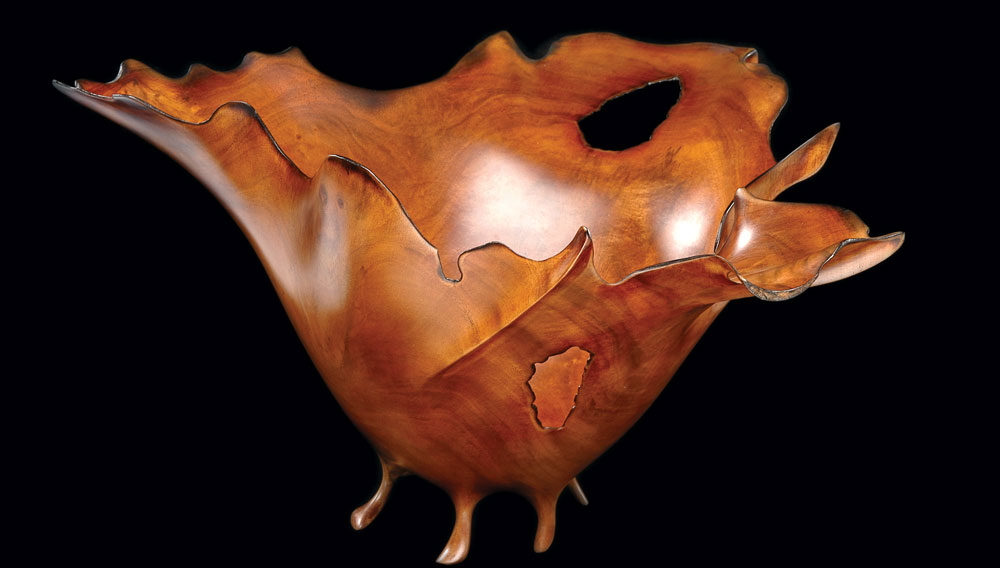 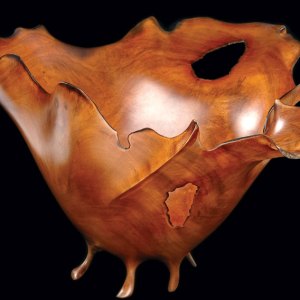 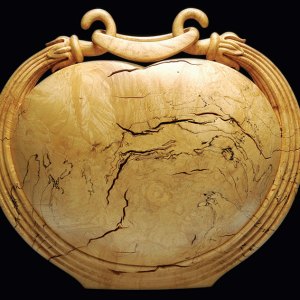 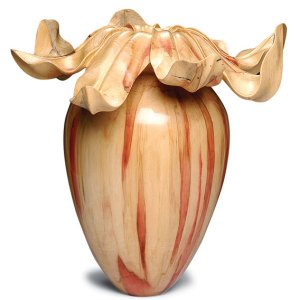 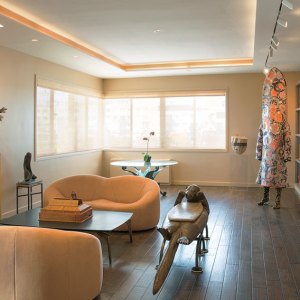 Pure instinct led Fleur Bresler to create one of the country’s foremost collections of wood art.

Fleur Bresler makes no bones about it: Collecting is her addiction, and at 88, she still loves the high. Every time she finds an art piece that calls to her—and there are plenty that do—she feels an immediate rush. “My heart flutters and I know I’ve got to have whatever that object is. If I don’t, I’m never going to forget it and I’m never going to forgive myself. It will absolutely haunt me. I still remember a quilt that got away decades ago. I can probably draw a picture of the darn thing.”

She is, by her own admission, a collecting “clutterer,” even if her alleged clutter is of a highly selective nature and displayed with a curator’s eye. Her Rockville, Md., apartment is filled to overflowing with some 1,500 works of art, ranging from tiny silver teapots to a towering fiber sculpture. But her predominant focus for the last 30 years has been turned and carved wood—a collection of 950 objects that she has been amassing ever since she stumbled across a groundbreaking exhibition at the Renwick Gallery, the crafts and decorative arts branch of the Smithsonian American Art Museum.

On a spring afternoon in 1986, she was strolling along Pennsylvania Avenue when she got caught in a thunderstorm. By happenstance, she was just a few steps away from the Renwick, so she ducked inside. What could be a more agreeable place for an enthusiast of classic American crafts to take shelter? Since the mid-1970s she had been collecting historically significant quilts that typified indigenous styles, along with handmade duck decoys representative of a centuries-old Chesapeake Bay tradition.

While she waited out the rain, Bresler wandered upstairs to have a look at a new show, the Edward Jacobson collection of turned-wood bowls by pioneers of the fledgling, little-known medium of lathe art. And pow! There it was, the telltale heart flutter. “I was just blown away,” she says.  “It was instant infatuation, an overwhelming visceral response. I had never seen wood in such an extraordinary range of colors and textures and shapes. What really drew me most intensely was the tactile quality—wood is an organic, living material, not cold to the touch like marble or glass. I had an insatiable desire to feel the bowls, to hold them in my hands, and had there not been a guard standing by, I wouldn’t have been able to resist lifting them out of their display cases. And that was it. I knew I had to own a piece.”

She was not the only one. Soon after the exhibition, according to Albert LeCoff, the executive director of the Wood Turning Center in Philadelphia, a group of avid, obsessed collectors emerged—some publicly and some, like Bresler, quietly. Shortly after the show, Bresler bought her first turned-wood vessel at an arts festival. She steadily acquired more works over the next few years, but without the remotest notion of building a museum-quality collection or even a collection at all. She was just buying pieces that she liked and wanted to live with. “I went about it very unscientifically—there wasn’t an iota of rhyme or reason to what I was doing. I could find inexpensive pieces that had one or two zeros—for $100 or less, if I made a mistake, so what? But those days are long gone. I’d say the average cost for a piece now is between $5,000 and $10,000.”

As Bresler’s passion for turned wood grew unabated, so did her knowledge of the medium. Contemporary wood art is American crafts’ youngest medium, but wood turning itself dates to ancient Egypt: The lathe is the earliest machine tool in history, powered first by humans with a rope, then motorized during the Industrial Revolution. In simplest terms, it spins a piece of wood as the turner roughs out a shape, refines the design with a variety of chisels, then sands and applies a finish. Until the latter part of the 20th century, turned pieces were primarily functional items created for domestic use: bowls, serving platters, spoons, candlesticks.

The contemporary movement got its jump start in the early 1930s when wood turner James Prestini experimented with lathe technology to blend function with craft in a modernist mode. Other pioneers working through the mid-century explored fresh creative territories. Bob Stocksdale began creating decorative bowls in rare and exotic woods. Rude Osolnik used scrap wood for his vessels, making the decaying irregularities a vital part of the aesthetic allure. During the 1970s, turners such as Edward Moulthrop, David Ellsworth, Mark Lindquist, and William Hunter advanced the field with ever-more-inventive, sophisticated techniques that revolutionized the movement. Moulthrop developed a lathe and tools that enabled him to turn mammoth bowls and goblets. Ellsworth invented blind turning, a method by which he hollowed out interiors through small openings with bent tools he designed to produce eggshell-thin walls. Lindquist broke with the tradition of sanded, smooth surfaces, using a chain saw to cut rough-hewn textures and patterns on vessels. Hunter ruptured the solid surface of his wood vessels to form an elegant, fluted effect.

By the early 1990s, innovative practitioners had pushed the medium far beyond its original utilitarian purpose to the purely aesthetic, one more grounded in sculpture. They had moved past the more understated early lathe pieces—and past the lathe itself—with the addition of extensive carving, wood burning, piercing, color pigments, and secondary materials like gold, silver, and precious stones.

In 1991, Bresler attended a lecture at the Wood Turning Center in Philadelphia given by the foremost wood art collector in the country, Dr. Irving Lipton, who advised collectors-in-the-making to buy at least two very different pieces from turners they liked, and to follow the evolution of the turners’ careers. His counsel was a watershed moment, spurring a more thoughtful approach to her collecting and the purchase of multiple pieces from both established and emerging artists. Her fervor for the craft led her to join the Renwick as a docent in the late 1990s, around the time that she was gaining recognition in the field as a serious collector.

Although she and her husband, Charles, who owned a real estate company, were not joint collectors—this is her addiction, not his—he indulged her ardor despite feeling that their apartment looked as much like a museum as a home. But together the Breslers had long been committed and generous patrons of the arts. In 2003 they made an extraordinary offer to the Renwick. They would give Kenneth R. Trapp, then curator-in-charge, free rein to choose pieces from their wood art collection to complement and strengthen the gallery’s own collection. Trapp cherry-picked 66 turned and carved masterpieces by the best artists in the field, whose combination of technique and imagination had revitalized the medium.

Besides signature works by the preeminent trailblazers, Moulthrop, Ellsworth, Lindquist, and Hunter, there was a cache of pieces by other virtuosic artists executed in a dizzying array of domestic and exotic woods and diversity of styles. Among the most remarkable were works by Michelle Holzapfel, Norm Sartorius, Ron Fleming, and Derek A. Bencomo. Holzapfel is known for her exquisite post-lathe carved objects and ingenious jewelry for the home, including a sinuous “table bracelet” centerpiece composed of three bowls, three vases, two candleholders, and two clasps. Perhaps more than any other piece in the Bresler collection, it reflects the evolution of wood art away from the earlier conservative forms. Sartorius creates quirkily beautiful, nonfunctional spoons that the artist describes as sculptures—“not spoons to stir the soup but to stir the soul.”  Fleming’s voluptuous, interpretive floral designs are inspired by his wife’s garden, and Bencomo’s dramatic carvings suggest the robust power of nature—from crashing waves to jagged cliffs.

“The Breslers’ gift remains one of the most significant in the history of the Renwick,” says Nicholas Bell, the gallery’s current curator, “and one of the largest of wood art to any institution in the country, to the extent that we now have one of the most comprehensive collections, I would say, in the world.” In conjunction with the exhibition A Revolution in Wood: The Bresler Collection, Bell wrote a book of the same name featuring large-scale photos of the 66 pieces that were donated, along with smaller images of all the other wood-based art in the Renwick Gallery’s permanent collection.

A month after the show opened in 2010, Charles Bresler died. After his death, Fleur endowed Bell’s position, and with that gesture he was given a new title, “The Fleur and Charles Bresler Senior Curator of American Craft and Decorative Art,” a challenge for business cards, but an honor for him.

And last year, the American Craft Council gave Fleur Bresler the Aileen Osborn Webb Award for Philanthropy. “She continues to be one of the most dedicated patrons of contemporary craft in the United States,” says the organization’s education director, Perry Price. “In addition to being a major collector and a financial donor to crafts schools and organizations, she gives of her time by serving on a number of boards. And just as important, she champions the next generation of artists. Fleur is very forward-thinking.”

She has always opened her home to artists and craft devotees from all over the country, and no room is off-limits nor is any artwork considered too precious to touch or hold, for that was just what she wanted to do when she first saw those turned-wood bowls at the Renwick.

“She’s passionate about everything and eager to share what she has, but never in a way that could be perceived as pompous or superior,” Bell says. “She’s a rare combination of sassy, brilliant, courteous, and very down-to-earth.”

What Bresler loves most about living surrounded by all the pieces she has collected are the memories they evoke and the stories they tell, particularly of her friendships with the artists and their families. Two years ago, she bought the apartment next to hers and joined it to her existing space, an expansion of 4,000 square feet that allowed her to accommodate larger pieces—her latest obsession is studio furniture and fiber sculpture—and spread out her vast, still growing, collection of wood art. The new space was strictly reconstructed with display in mind, including LED and halogen museum-quality lighting and built-in shelves.

“It’s more open and gallery-like,” she says. “But I’m sure it will just become cluttered again!”