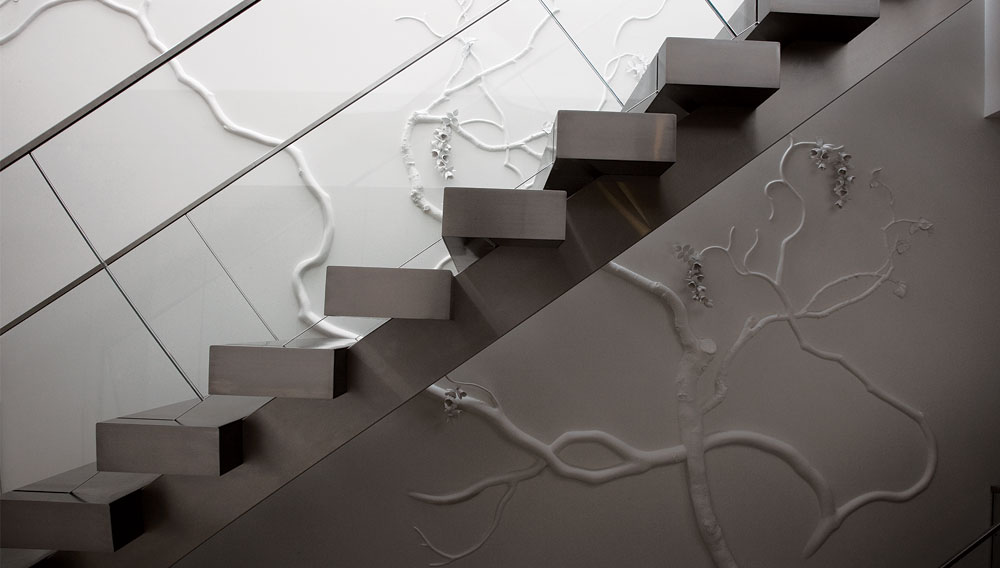 David Wiseman has transformed a four-story staircase in a Manhattan apartment into a work of art. Plaster linden branches bearing porcelain wisteria blossoms ascend with the stairs, and a thick trunk, fashioned from fiberglass to keep its weight light, appears to pierce a flight from below. The design appears natural and at the same time stylized: The linden branches and wisteria blossoms are cast or sculpted in pure white, matching the color of the walls. The work is not intended to depict a grim, postapocalyptic vision of nature reclaiming the land. Rather, it celebrates the union of nature and architecture.

The staircase also tells a story for the clients who commissioned it. “It became a living family tree for them,” says Wiseman, explaining that genealogical research revealed references to lindens and wisterias in the names of the couple’s ancestors. A snow-white porcelain owl perched outside a window and overlooking the staircase represents their firstborn son. The installation, which required a year of planning, a year for fabrication, and a month and a half to put in place, is still evolving. The family recently welcomed twins, and Wiseman will fashion animal avatars for them, too, but not right away. “We’re waiting to get to know them more, and see what their personalities are,” says Wiseman. In the meantime, Wiseman designed a suite of Judaica objects that will include silver kiddush cups for all the children, decorated with depictions of wisteria blossoms to match the staircase.

Wiseman, who is 32 and based in Los Angeles, is one of several artists and designers of contemporary furnishings and decorative objects who are transforming the field by imbuing their work with playful, artistic touches. They draw inspiration from a wide range of sources—from shapes and sounds found in nature to creatures of fiction and legend.

The 29-year-old fraternal twins Nikolai and Simon Haas of Los Angeles, also known as the Haas Brothers, recently released their Beast collection, which was influenced by the stories of Maurice Sendak and Dr. Seuss. Many of the furnishings are upholstered in Icelandic sheepskin, Finnish reindeer fur, or Wyoming buffalo fur and fitted with bronze feet that resemble hooves or cheetah paws. Parisian Hubert le Gall’s Mon Yeti lamp is sheathed in sheep’s wool and features a gold-colored chain that tethers it to the wall, in case the elusive creature tries to run away. Hervé Van der Straeten, another Frenchman, has created abstract pieces that subtly reference crystals and natural geometric forms. The artist and interior decorator Kathy Taslitz, who works from Los Angeles and Chicago, casts delicate, lattice-like sculptures of leaves in bronze. Her latest project was inspired by listening to the sounds of seashells. It features a series of oversize seashells fitted with audio tracks that play not just the sound of the ocean but also the sounds of children laughing, a heartbeat, fingers alighting on a keyboard—“what you hear through the ages,” she says. “There’s a calming sensation when you sit with [the shells].”

The demand for contemporary designs has been soaring of late, says Zesty Meyers, a cofounder of R & Company, the Manhattan gallery that represents Wiseman and the Haas Brothers. “The design market has been blowing up,” he says. “The last 10 years have seen insane growth in 20th- and 21st-century furniture.” Auction results support his assertion. In 2009, Marc Newson’s 1985 landmark piece Lockheed Lounge, a chaise-shaped structure clad in the type of riveted aluminum that covers an airplane’s fuselage and wings, sold for £1.1 million ($1.8 million) at Phillips de Pury London. Mouton de Pierre—a circa 1979 sculpture by the late François-Xavier Lalanne comprising 10 sheep made of painted epoxy stone and patinated bronze—fetched $7.5 million at a 2011 auction of 20th-century art and design at Christie’s New York.

Aside from a feel for the fanciful, the earlier-­mentioned artists and designers share another trait: They are technical masters. Wiseman makes his own bronze and porcelain on-site at his Los Angeles studio. The Haas twins trained under their father, a carpenter and stone-carver from Texas; now they employ him. At her studio in downtown Los Angeles, located next to a foundry, Taslitz uses the lost-wax method to cast her bronze sculptures. Le Gall is essentially self-taught. Van der Straeten had some formal schooling but learned mostly by wrestling with the problems the furniture designs posed to him. He opened his furniture workshop in 1999 and visits it weekly. “It’s very satisfying,” he says of owning his own shop. “It allows me to change whatever I want, to improve my design, and to discover something new. It’s like having a sports car: I can change gears very quickly.”

Though running a workshop and managing employees can be taxing, Van der Straeten finds it well worth the effort. “One of my luxuries is I have the freedom to do what I want, when I want, and I can make it right,” he says. “I work only on pieces that make me happy in terms of their quality and creativity. They’re not just collectible decorative items. I hope they’re more than that, and I hope people can feel that when they see the pieces.”