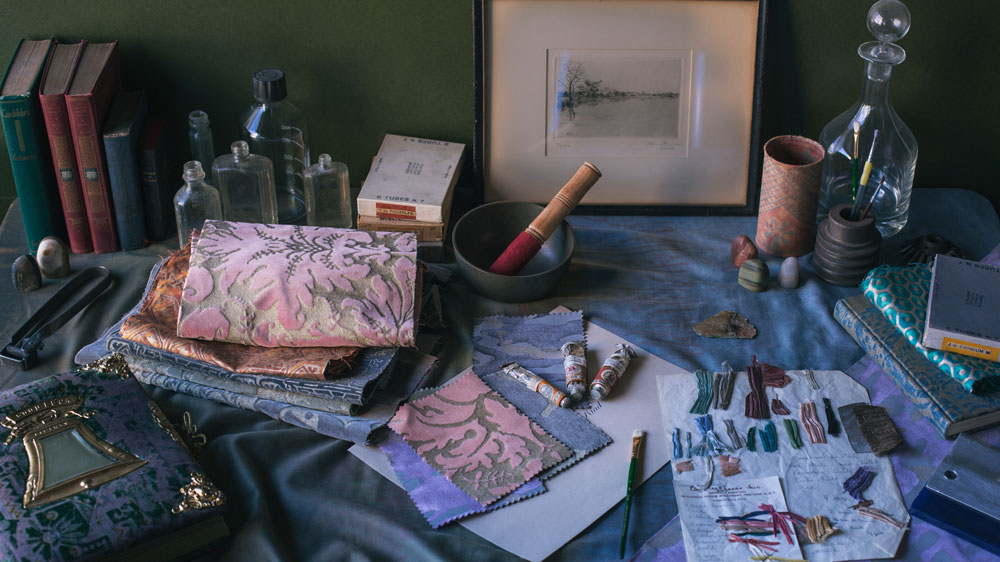 Not everyone in Los Angeles lives in a modernist temple perched high in the Hollywood Hills, surrounded by achingly minimalist furniture that looks like it could draw blood. The City of Angels has a traditional side that doesn’t typically make the slick real estate shows. Mostly it’s moody shots of low-lit, yesteryear haunts frequented by a glamorous Hollywood crowd that could have never imagined the iPhone.

This week, though, all the played-out L.A. stereotypes get tossed. Fortuny, the famed Venetian textile company, is opening a dedicated space inside the Dessin Fournir showroom in West Hollywood. To design insiders, it’s a coup. To the company, it’s a natural move.

“California has always been one of our strongest markets,” says Mickey Riad, Fortuny’s creative director. “Use of Fortuny in Southern California goes back several decades. The design community and Hollywood clientele have a great understanding and appreciation for Fortuny. We have been looking for the right home for a few years now and when this opportunity presented itself, it made sense and felt right.”

Even though the brand has had a strong presence in New York for 90 years, L.A. is very much its own thing. The company used to do trunk shows out of the iconic Chateau Marmont to present their goods. Having a gallery in Dessin Fournir—a major designer destination on La Cienega—takes the shop-within-a-shop concept to a more sophisticated level. “We wanted to partner with someone that really got what we do and would provide the space and support to allow us to create a Fortuny boutique,” he says. “We also liked the idea of having a mix of beautiful furnishings, old and new, that would mix well with our textiles.”

Dessin Fournir specializes in artisanal traditional and transitional furniture and furnishings. And they’ve perfected the kind of design mix that seduces people into thinking that creating interiors is easy. “If you live and breathe design like we do at Dessin, you can’t help but be influenced and inspired by our market demands. Change is the name of the game, and that influences and excites all of us and our imaginations to experiment and create,” says Chuck Comeau, president of Dessin Fournir about this particular moment in design culture.

The dedicated 425-square-foot Fortuny gallery in Dessin Fournir “was designed to immerse our clients for just a moment in Fortuny’s rich cultural heritage,” says Comeau. “We have used referential icons to transform the space and to stir our clients’ imaginations.” Fittingly, Dessin Fournir’s showroom has its own unique Hollywood story, as the company is situated in the former Turnabout Theater, a celebrity hangout in the 1940s and 50s. A few famous autographs, like William Holden’s, can still be found on the wall. And the courtyard (often the site of a good industry party) has been captured in numerous archival photos.

Even if it’s just a passing familiarity, most people recognize the Fortuny name. Best-known for fine printed cottons made in Venice through a secret process that are, essentially, couture works, the brand is the opposite of mass-produced design. Founded by artist, inventor, textile and fashion designer Mariano Fortuny, who began creating textiles in 1906 from his studio in Venice, the company rose to international acclaim through his works in lighting, theater, fashion, and textiles.

In 1907, he and his wife, Henriette created the The Delphos gown, which featured an extremely elaborate pleating process, and has since become a collectible artwork sought after by museums worldwide. The company’s printed cottons are still produced in the same factory, on the same machines, using the same secret process (invented by Fortuny himself). They also feature techniques handed down from generations. Favored by A-list designers, Fortuny’s entire collection of printed cottons, velvets, and high-end solids is now available to them in Dessin Fournir.

The Philospher’s Stone collection by Fortuny.  Photo: Courtesy of Fortuny

The look is unquestionably classic. Which is not to say traditional has become passé. “True beauty never goes out of style,” says Riad. “Fortuny has a wide range spanning from very traditional to very modern. While we may be using techniques developed over a century ago, there is a big variety of color and pattern that can find their way into most design styles. There is a rich heritage and authenticity that cannot be faked.”

As for how this translates into interiors, Riad reminds us the world has not gone mod. “We see a lot of people starting to gravitate towards more lush, rich textures again. You are seeing it in fashion and that is making its way into home, too. It is all in how you use it and what you pair it with.”