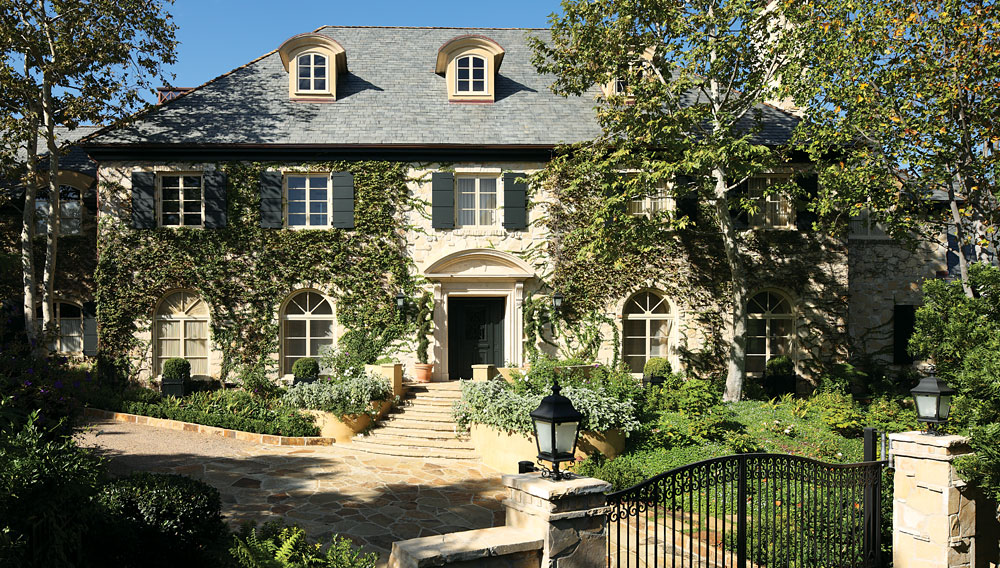 After purchasing an unremarkable mid-1990s house in a private enclave of Los Angeles in 2008, the new owners—an investor; his wife, a philanthropist; and their two children—were faced with the prospect of a significant remodel that would meet their family’s needs and accommodate their growing art collection. They immediately called in Southern California designers Frank Pennino and Scott Shelley (whose firm had revamped the couple’s first house) and Los Angeles–based architect Richard Manion. “It was a mediocre tract house,” says Manion, “but it had potential.”

The team realized that potential in 18 months’ time, reworking the exterior to resemble what Manion calls “a proper modern French-style home” and dropping the ceiling of the entrance hall to provide a better backdrop for artworks including Callum Innes’ Exposed Painting Dioxiane Violet (2007) and Wendell Castle’s Abilene Rocking Chair (2008). The hall leads through a reception room to the living room, the entrance to which is defined by 1940s-era columns that Pennino obtained from a house on the Côte d’Azur.

Man Powered | Pennino kept the family room casual, selecting leather club chairs from Dan Marty Designs, a rosewood burl coffee table from JF Chen, and a flokati rug from Aga John. The theater—part of a new addition that brought the house from 10,000 square feet to 13,800 square feet—evokes a sense of glamour, with a chandelier and sconces from Paul Ferrante and plush mohair-covered seats from Nancy Corzine. “The theater is my favorite room,” says the husband. “My kids love to watch movies with their friends, and I love sneaking into the theater on my own to kick back and catch some sports on the big screen.”

But it is the husband’s office and library that is “more like his man cave,” notes the wife. “He uses it to decompress.” Here, Guillermo Kuitca’s Untitled (Unclaimed Luggage) (2000) hangs on a wall lined with chocolate-brown upholstery by Kravet Couture, and A. Rudin chairs covered in fabric from Dedar encircle the midcentury cocktail table from Downtown Gallery. “The room feels very masculine to me, with its dark, soothing colors,” says the husband.

Family Style | Manion nearly doubled the size of the dining room. “I wanted a space where we could have lots of family and friends join us,” says the wife. “When we are in that room, it’s about sharing a meal and spending time together—it’s a phone-free space with no distractions.” The architect also added moldings (here and throughout the house) based on those at the Petit Trianon at Versailles. An Italian Art Deco Murano-glass chandelier from Ed Hardy Antiques hovers over a Squires dining table of Pennino’s design, which expands to seat 16. Above the circa-1949 Jules Leleu sideboard is A la Dufresne, Jackie Chan Tiles, Blue Black (2000) by Kate Shepherd.

In the kitchen, distressed light hardwood floors from Richard Marshall and white cabinetry replaced the space’s formerly dark decor. The designers traded countertops with bull-nose coping for sleek-lined surfaces and vintage accents that include a polished-nickel light fixture with glass Holophane shades from Barton Kyner. The barstools at the marble-topped island are from Minton Spidell.

Master Peace | Like the one in the entry hall, the ceiling in the master bedroom was lowered to make the space more intimate. “A home shouldn’t depend on extravagant gestures and should have rooms of livable size,” notes Pennino. “This is our peaceful, quiet place,” says the wife. “And it’s casual enough that if my husband wants to take a nap, he doesn’t have to undo 50 layers of throw pillows and bedspreads.” The bed, from Therien & Co., features leather accents from J. Robert Scott. Above the 18th-century French limestone fireplace is a Branches bull’s-eye mirror by Hervé van der Straeten for Maison Gerard.

Just off the bedroom are the couple’s bathrooms; anchoring the wife’s is a LeFroy Brooks tub flanked by bronze stools from Formations. Before the oculus is a brass urn from Ed Hardy Antiques. “The greatest luxury I have is my bathroom,” says the wife. “It’s a place where I can step away and relax, even if for a few minutes.” Adds the husband: “I believe that nothing is healthier for a marriage than his and her offices and his and her bathrooms.”

Gimme Shelter | The family—now in the home for about a year—often retreats to the poolhouse, which has a kitchen, alfresco dining room, bathroom, and changing area. “We’ve already had so many good times out there,” says the wife. Landscape architects Maureen Barnes and Sydney Baumgartner helped green up the area; the chairs and chaise longues with Summit fabric are from David Sutherland.

Steps from the family room is another outdoor retreat: the loggia. Pennino outfitted the space with lightweight cane and rattan furniture from Dan Marty Designs.

“When we were in the middle of the project,” says the wife, “I remember standing here, looking at the tapestry of the mountains, and thinking, this is our dream home.”