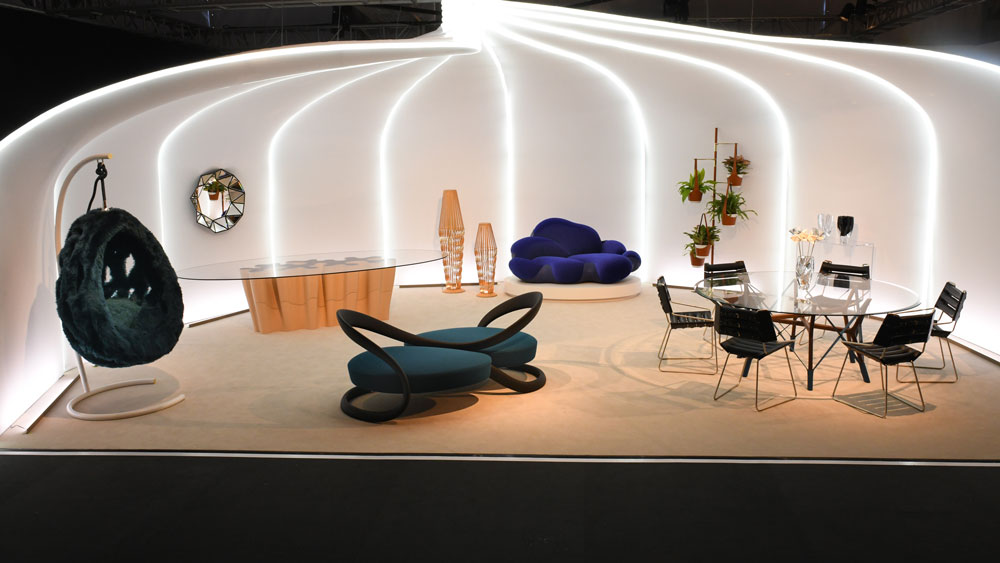 Ever since Louis Vuitton launched Objets Nomades, a collection of chic travel-inspired pieces by star and up-and-coming designers in 2012, style cognoscenti can’t wait for the newest installment.

A pair of stunning tables debuted at Design Miami during Art Basel in January, and they suit the model of bold and collectible. While another piece from the brand’s accessories range, Les Petits Nomades, is a swirling handblown vase in dramatic black or clear glass.

The concepts behind the work are as intriguing as the finished designs. Case in point: The Anemona table by the Milan-based Atelier Biagetti. The piece features a luscious pairing of an undulating rose-y beige natural LV leather and a lapis blue lacquered interior that pops under a glass top. “We wanted to examine the human necessity for a ‘home’ and we imagined a big table to gather around with extended family and friends, to feel the warmth of familiarity to start the journey,” say Alberto Biagetti and artist Laura Baldassari, also husband and wife. “We wanted to take this domestic symbol of performance and cross-breed it with something that for us is the epitome of freedom: the sea.”

Both designers come from Ravenna—a city with an artistic history going back millennia—and the Adriatic Sea near their hometown, which sparked their design. “The city is very slowly sinking and so it also represents a limbo between the two worlds of the land and the sea,” say the designers. “What is below, what is above and what is in between is all mixed in a very special alchemy that is also reflected in the concept and design of the Anemona table.”

The name itself comes from the underwater sea creature. “It exists in endless forms—it is flora, fauna, symbiotic, sensual, asexual—a real metaphor for endless possibilities and co-existence of different concepts. The interior of the table is a rich blue, “the deep blue of the night sky, the ocean, lapis lazuli,” says Biagetti, meant to conjure a sense of infinity and mysticism.

“The movement is a reflection of elements and forces in our world that we cannot (or do not) see: that other world that is sealed beneath the surface of the sea that has its own rules, movements, behavior—or the vibrations and air waves that make sound and more precisely the voice—hence the ulterior connection with the opera,” say the designers.

Laura, a trained opera soprano and painter, also channeled the costumes at La Scala with the lyrical, almost fabric-like table base. “As soon as we think of opera houses, we think of that great curtain that separates the real space of the audience from that magical world of the stage. The curtain itself becomes a metaphor for an emotional journey with often unexpected episodes that carries you away from reality,” she says.

A very different table from the Swiss design team, atelier Öi, is all legs. The Serpentine design has a beveled glass top that sits on six criss-crossed, smooth American walnut legs held in place by finely worked straps crafted from blue Louis Vuitton leather. The free flowing movements of traditional dances inspired this form, a constructed play of weight and tension. It’s available as a large dining table or a coffee table.

“The farandole, a traditional village dance popular in France, inspired us,” says Armand Louis, cofounder of atelier Öi. “It is a dance in which men and women hold hands, form a chain and follow a leader through a serpentine course. The leather bands connect and support the construction—hand in hand!”

What’s special about the table is the enormous tension between wood structures. “That means no more play is possible,” says Louis. “It’s under tension. All forces are carried by the inertia of the mass. The table feet remain elegant in spite of the weight supported. The glass plate weighs almost 100 kg, compared to about 3 kg for the supporting structure.”

The criss-cross employs the principle of bracing.  As part of the original intent of the collection—to facilitate transport and travel—the French brand says the table can be folded. “It becomes almost two-dimensional (with the possibility of opening the straps, and feet fold to become flat). The logic of a foldable object responds to nomadism.

Adding to accessories, Tokujin Yoshioka expanded on his Blossom Stool design from two years ago to fashion, hand blown in clear or black glass by master artisans in Murano, Italy. The clean lines are informed by the brand’s classic petal Monogram pattern in a sculptural unfurling symbolizing the motion of blooming.