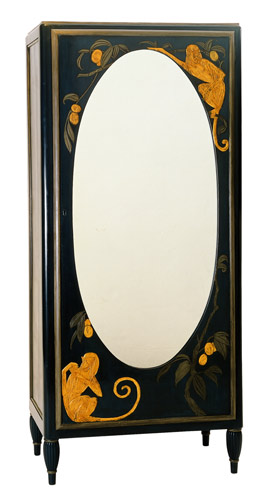 Pierre Lahalle and Georges Levard created some of the most exotic furniture of the early Art Deco period, but only a handful of French connoisseurs were familiar with their work. That changed with the debut of an exquisite suite of Lahalle and Levard bedroom furniture—two side chairs ($8,000), an armoire, a bench, two single beds, and a chest of drawers ($28,000)—at the International Art + Design Fair 1900–2003, held in New York in September.

Designed in 1918 for the Lahalle family home outside Paris, the pieces, carved and painted with whimsical monkeys and fruit motifs, are typical of the designers’ exceptional craftsmanship and sumptuous style. “Their furniture incorporates a variety of shapes and techniques—polychrome marquetry, exotic hardwood veneers, and lacquered and painted surfaces—that make it among the most unusual of all Art Deco furniture,” says Benoist F. Drut, co-owner of Maison Gerard, the Manhattan Art Deco dealer that exhibited the bedroom suite.

From about 1910 through the 1920s, in the tradition of the great Art Deco designer-decorators such as Sue et Mare and Armand-Albert Rateau, Lahalle and Levard catered to an intellectual upper-middle-class clientele living mainly in and around Paris, who would commission one-of-a-kind furnishings and interiors for their mansions. Parisian art collector Marcel Kapferer and several South American families were among their clients.

Their designs are representative of the early Art Deco period, with a classicism inspired by Louis XV, Louis XVI, and Directoire furniture styles, combined with such modern Deco elements as fluted and tapered legs and Asian-inspired lacquered surfaces. “Lahalle and Levard’s furniture was visibly rooted in the past, but at the same time it transcended the past,” observes Drut. The designers’ simple yet playful interpretations of past styles were a reaction against what they considered to be a stagnant status quo. As Lahalle related in a 1920 article in the French magazine Art et Décoration: “We wanted to create furniture that showed a refined elegance and taste for luxury, but which would also be practical, modern and comfortable.”

Lahalle and Levard collaborated with architect Maurice Lucet on many commissions, as well as with designer André Frechet on the groundbreaking 1925 Exposition des Arts Décoratifs, and they received great acclaim for their exhibition of red lacquer and gold furniture at the 1919 Salon d’Automne. Despite these accomplishments and their notoriety, Lahalle and Levard eventually faded from the spotlight.

“Most of their furniture was privately commissioned, unlike better-known Deco designers such as Paul Follot and Maurice Dufrene, who also designed furniture for French department stores like Au Printemps and Le Bon Marché,” explains Drut. “And today’s taste has tended more toward the sleek, geometric style of Jacques-Emile Ruhlmann, Jean-Michel Frank, Paul Dupré-Lafon, and others who dominated the later years of the Art Deco period. We hope Lahalle and Levard’s furniture will expand appreciation for great early Deco design.”