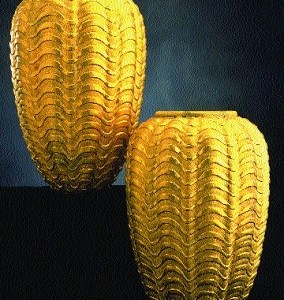 “I learned from looking back,” says Robert Kuo. He is speaking of his immediate ancestors, in particular his father, who began teaching him the delicate craft of cloisonné when he was 15. But he is also acknowledging the legacy left by craftsmen from centuries past, whose vision still inspires him. Kuo’s mission is to keep the craft of cloisonné alive while constantly reinventing it. “I am always looking at techniques in a new way. At the same time, I want to preserve their original beauty,” says Kuo, who was born in Beijing and moved to Los Angeles, via Taipei, in 1973.

When Kuo’s father, a watercolorist and calligrapher, started a cloisonné atelier in Taipei in the late 1960s, the younger Kuo became immersed in the complexities of this decorative art. Today, at 55, Kuo is a master of cloisonné as well as repoussé. In his hands, the marriage of ancient techniques with a modern sensibility has brought commissions from such interior designers as Bruce Gregga, William Sofield, and Michael Smith.

Cloisonné, from the French verb “to partition,” is a time-honored enameling technique that dates back to the Byzantine Empire. The river of gold that runs through the vividly colored enamel of Kuo’s vases, lamps, tables, candlesticks, and boxes is hand-formed copper wire that adheres to a copper base. As if completing a puzzle, the spaces between the partitions are filled with pigmented enamel. The object is then fired in a kiln. Because the enamel shrinks, it often takes four firings before a piece is ready to be hand polished, rendering a smooth, shimmering surface. Sometimes, explains Kuo, it may take a year to complete an object.

In the mid-1980s Kuo began experimenting with repoussé, where metal is hammered from the inside to create a relief pattern on the surface of an object. Kuo’s shapes push the envelope but still reference the past, from the Han Dynasty to Art Nouveau and Art Deco. The Cocoon lamp, which is part of a series produced for McGuire, is repoussé with a gold surface. The Goblet vase has a sculptural fluted form and a surface plated with thick 24-karat gold on top of copper. Los Angeles designer Antonio Da Motta relies on Kuo for what he calls “astute craftsmanship and a sophisticated aesthetic.” Da Motta collaborated with Kuo on a custom-made repoussé sideboard. “I could never imagine being able to design furniture using repoussé, but this is extraordinary,” Da Motta says, “a true luxury.”

Family tradition is at the root of Chinese culture. Kuo maintains that continuity by having his two daughters work alongside him: Karen runs the elegant Los Angeles gallery/ showroom, while Chin-Chin directs the operation of the studio in China, where Kuo spends half his year and where the work is finished.

Inspired by nature, Kuo’s shapes are organic, sensual, and even humorous. “It is my way of expressing enjoyment of life and beauty,” explains Kuo of his oversize sculptural repouseé animals, fruit, and spheres, “and a reminder that life shouldn’t be taken so seriously.”