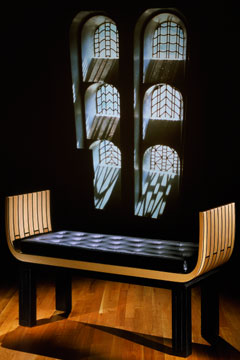 To design aficionados, one of the more seductive features of the 1996 movie Ransom was not Mel Gibson but the exotic, sleek maple dining table and credenza in his character’s home. The same dining table played a major role in the gangster’s lair in The Mask, the 1994 Jim Carrey film. The furniture that is upstaging movie stars was originally designed in the late 1920s by Eliel Saarinen, the Finnish architect who landed in the Midwest shortly after World War I.

For those who admire the clean lines of Bauhaus metal furniture but are still drawn to the luxurious woods and handcrafted techniques of Art Deco, Saarinen’s designs have understandable appeal. Small wonder that his pieces continue to turn up in residences, offices, and even hotels such as the Four Seasons Marunouchi in Tokyo.

Arkitektura, a furniture company based in New York, carries a range of Saarinen’s sofas, tables, and chairs, with a customized twist. “Every piece we sell is made to order,” says company principal Gary K. Deane. “It allows us to undertake certain adaptations when desired.” One client wanted to buy a circular maple dining table and chairs, but he needed to seat 16 in a rectangular dining room on a 192-foot-long yacht. No problem. “Most of the time the dimensions just need to be adjusted a bit,” says Deane. “We want to be flexible but also to keep Saarinen’s proportions and spirit.” Adding to the flexibility, Arkitektura lets clients provide the upholstery fabric, so that they can select the pattern and color that make the most sense in their residence.

Saarinen first came to the United States in 1922, when he had designed a skyscraper that didn’t get built—it placed second in a Chicago Tribune–sponsored competition. The talented architect remained in the country, and today he is renowned for the buildings and furniture he designed at Cranbrook, a complex of children’s schools and an art academy that opened in 1932 in Bloomfield Hills, Mich.

Craft, comfort, and pure form came together in the furniture Saarinen designed for his house on the campus of Cranbrook Academy, where he served as president from 1932 to 1942. For the oak-paneled, octagonal dining room, he made side chairs of maple with lacquered ebony trim; the backs are fluted with a scalloped indentation. The circular table is maple with exotic veneers of satinwood, ebony, ramin, and limba.

Arkitektura’s collection also includes reproductions of the furniture that Saarinen’s son, architect Eero Saarinen, created for the Kingswood School for girls at Cranbrook in 1930, plus designs dating to 1930 by Sir Edwin Lutyens, the eccentrically classical early-20th-century English architect, and a Japanese-influenced line of furniture that architect Michael Graves produced in 1990. But the soigné pieces by Saarinen père remain the mainstay of the collection. “Arkitektura was the first to come out with his furniture in 1984,” says Deane. “We are the recognized source within the trade.”