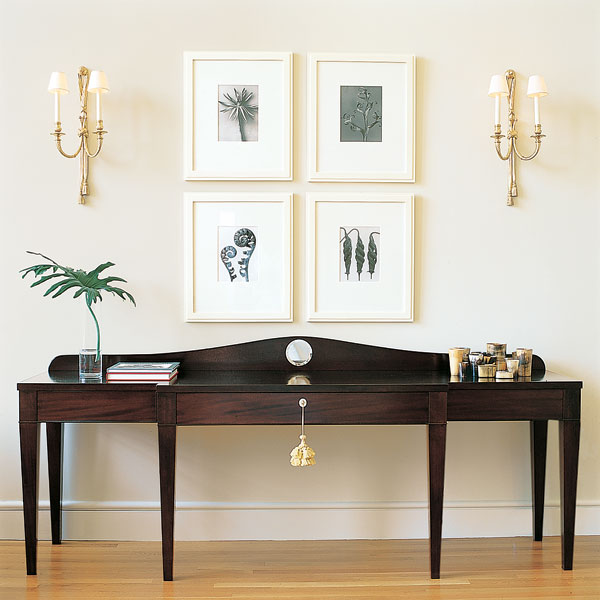 The year was 1997, and she was in Paris while her husband, photographer Larry Snider, was on assignment in China. “When you travel alone, you have time to linger and focus on all your favorite passions, and I found myself going back to the museum and paying attention to all the great furniture that had been done in the past,” says Snider, a corporate graphics specialist turned interior designer. “When I came home to Chicago, I resolved to put together a small furniture collection, but I didn’t want to reproduce anything. I wanted something clean and contemporary but also something that referenced the periods that came before that were worthy of a second look.” Those countless visits to the museum and the sketches she made from her hours of research became the genesis of Snider’s debut collection, appropriately dubbed the Paris Series.

“The first collection has a lean, light, feminine scale,” says Snider of the boxy cherry and mahogany wood pieces perched on sinuous saber legs. First introduced at the Chicago Design Show in October 1998 and winner of the Chicago Athenaeum Distinguished Furniture Award, the made-to-order Paris Series now comprises more than 28 pieces—writing tables, dressing stands, upholstered settees, and lounge chairs, priced from $2,325 to $13,000—that incorporate what she refers to as “the French sensibility.”

The Grande Salon Table and Paris Writing Table both feature a serpentine-shaped gallery at the back and faux ivory escutcheons, a signature detail that references the hardware on early Art Deco designs. “There’s something about shapes and forms, playing lyrical shapes against others that are strict and restrained, that became a language in the collection,” Snider says. “I see my furniture as very minimalist, but people respond to it as softer, more midway between something very severe and something traditional.”

Occasionally, Snider turns to a heftier period. The first two pieces in her new Sweet Dreams line—a pair of pencil post beds—are her modern interpretation of an 18th-century Austrian bed. Both the Vienna, with its serpentine headboard, and the Salzburg, with its straight upholstered back, feature tall tapered posts. “The influence came from these high headboards with decorative hand painting or fussy carving but done in a very simple manner,” she says. “I see them, especially the Salzburg, as a blank slate, a piece that designers can work into any environment, from the most austere modern interior to a more traditional setting. The challenge is weaving a similar thread through all of the designs so they look like they are coming from the same place.”

Snider’s fascination with timeless design became even more pronounced following September 11. She started her interior design career in the 1970s at Ford & Earl Associates, which at the time was creating the interiors for the World Trade Center. Later she became head of the design department for Minoru Yamasaki, the architect of the towers. “Yamasaki reminded me that it was completely acceptable and appropriate to labor over the details,” says Snider. “I just want to be a part of something enduring.”