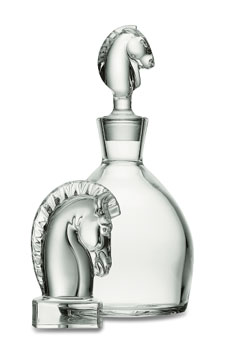 When english glassmaker Frederick Carder established Steuben Glass in 1903 in Steuben County, N.Y., his main competitor was Louis Comfort Tiffany. Both men produced colored art glass in the Art Nouveau style, at first following the European fashions. When Corning—known initially for manufacturing glass lightbulbs, then for early television tubes, and today for fiber optics—purchased Steuben in 1918, it was an ideal marriage of technical innovation and artistry.

Arthur Houghton Jr., who was named Steuben’s president in 1933, was a young man with extraordinary vision. He wanted to make a bold splash with Steuben glass, replacing historic European traditions with new, purely American styles and leaving color behind to make a modern statement in clear glass. He and Corning developed a new formula for clear crystal that had the highest lead content in the world—between 30 percent and 35 percent—which produced brilliant, highly refractive crystal with exceptional depth and clarity. (The company has allayed concerns about lead crystal with a special process that reduces lead content on inside surfaces that come into contact with liquids.) Instead of deep-cutting the crystal as the English and Irish did, the Steuben artists etched and engraved the glass or simply relied on shape to create a New World aesthetic. Walter Dorwin Teague, one of the 20th century’s most important industrial designers, created glasses for Steuben that possessed a spare, geometric elegance. Steuben creations such as these represented the soul of American postwar style: simple, dynamic, architectural.

Steuben turns 100 this year, and to celebrate, the company is rolling out an unprecedented collection of new stemware and barware as well as decorative archive pieces that have long been out of production. To cap off the birthday year, an exhibition at the Museum of the City of New York titled Glass and Glamour: Steuben’s Modern Moment in New York, 1930 –1960 will open on November 8, and Abrams will be publishing a revised edition of Steuben Glass: An American Tradition in Crystal.

Steuben is marking its centenary with several new collections. Introducing such an extensive range is a departure for the company, and for the first time, the pieces are available in a production line instead of by custom order, making them more accessible. Most striking are the Counterpoint and Evening suites by Dante Marioni and the Petal Cut stemware and bar collection by Gerald Gulotta. Joel Smith’s Century collection is a stunning lineup of glasses for the wine connoisseur. His Teardrop decanter, with its crystal teardrop stopper, and the Equestrian decanter by David Dowler, topped with a horse’s head, are destined to become collector’s items.

Steuben is also reaching back into its archives to reintroduce 12 classics.

George Thompson’s Lotus vase (1940) and Sheared Rim vase (1957) and several figurative animal sculptures are just a few of the heritage items that are reemerging. Salut, Steuben.