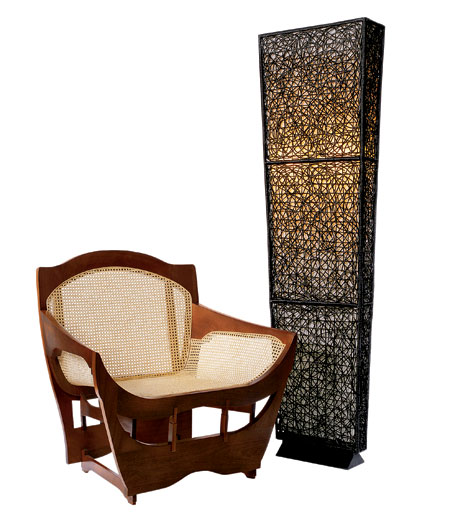 What Michael Jansen has learned most from the last decade of touring and working in Africa, Thailand, India, Egypt, China, Indonesia, and the Philippines is that “we are all a little overdone in our ‘urban-ity.’ Quite frankly,” says the American-born, India-based architect, hotel interior designer, and globe-trotter, “our technology and automobiles and Italian furniture design leave some people a little cold.”

That observation prompted Jansen to take a world’s-eye view of interior design and create Urban Tribe, his collection of “global modern” furniture that revisits primitive pieces with a modernist’s eye. “I think we all have enough technology in our lives,” he says. “Now we need a feeling of warmth and security that we get from simple, comfortable forms and natural materials. That is what I call global modern. But these natural things can’t be rough. They have to somehow make sense in the contemporary world, too. That’s where the mix comes in.”

Jansen incorporates the basic building materials utilized by some ancient cultures—bamboo, eggshell, coconut husk, rice paper, rattan—in his furnishings to give them a primitive element that is at the same time sophisticated. His Nirvana coffee table and Yu side table, made of solid cherry and Macassar ebony veneer, respectively, both feature horizontally sliced strips of bamboo encased in a durable resin finish. His Venus lamp employs the same process with coconut husk or burnt Vietnamese eggshell that has been backlit. “The entire exotic world is fair game for inspiration,” says Jansen.

That world includes a restaurant in a remote village in Indonesia, where the walls were covered in a crazy quilt of woven rattan. Jansen took a sample of the quilt back to a factory in China and had the curly multihued weave copied on the 6-foot-tall inverted pyramid Fusuma torchère. “It’s quite dramatic—I’ve taken the rattan and stained it dark,” he says. “Now there’s a chicness about it, but it still has definite tribal elements. It’s sort of a return to the village idea, but an urban village.”

The 34-year-old Jansen first became enamored with foreign crafts and cultures while working for Atlanta architect John Portman, who sent the young draftsman to operate a branch office in New Delhi in 1996. There he met and apprenticed with renowned Indian architect Satish Grover, who introduced Jansen to his daughter, Naira (who would become Jansen’s wife), and to what the designer calls “the wonderland of chaos that is India.”

His subsequent work in hospitality design, including a stint with Bilkey LLinas Design creating furniture for hotel properties such as the Four Seasons, has since taken him to nearly 20 countries and given his work an influence that can be described as cross-cultural contemporary.

Others, of course, have traveled down this East-meets-West path before. Nevertheless, says Jansen, “if we use an exotic material, we use it in a different way. The look is still modern, but the forms are unusual.” Best of all, he insists, his pieces represent not just the craft skills of indigenous people around the world, “they also embody the spirit of design, language, and arts found in these cultures.”