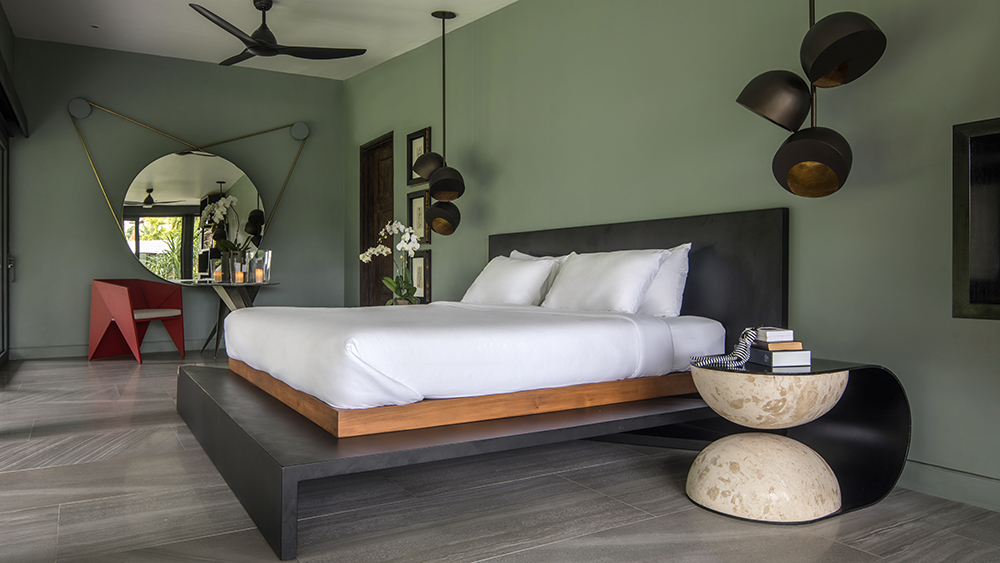 Furniture designer Maximilian Eicke’s residential compound in Bali serves as both a home for him and his parents and a testing ground for new concepts. Before a lamp, chair or glass tumbler is made available for purchase via his brand, MAX ID NY—which is building a studio on the island—it often spends time within Eicke’s own four walls so he can observe how it performs during daily use. Even his bedroom is part laboratory and features several pieces that have not yet come to market.

The designer wanted his bed to look like it was floating, so he started with a black frame made of lacquered plywood, then topped it with a slab of solid teak. As with most of his furnishings, there are no metal accents or hinges here, so all these components appear to fit together seamlessly—a minimalist style inspired by Japanese architecture.

“My whole design language started as the most basic geometries: square, triangle and circle,” says Eicke. The pendants flanking the bed showcase this idea best, as each of the three bulbs contains a different cutout shape: The square points toward the bed and functions as a reading lamp; the circle spotlights the side table; and the triangle illuminates objects farther away.

Eicke’s bed looks out onto the lush courtyard, but the blank wall by the door felt a bit confining by comparison, so he placed a mirror there to serve as an additional window of sorts. The tethers of the cat-shaped piece’s triangular ears don’t actually keep it aloft. It was too heavy—one of those feasibility tests for a new design—so Eicke fixed the mirror to the wall instead.

Complicated to engineer, the side tables were designed so there’s only a one-inch gap between the two pieces of marble, continuing the floating effect of the bed. Eicke says it was a very trial-and-error process: The stone was so heavy it often caused the metal to bend too far during production.