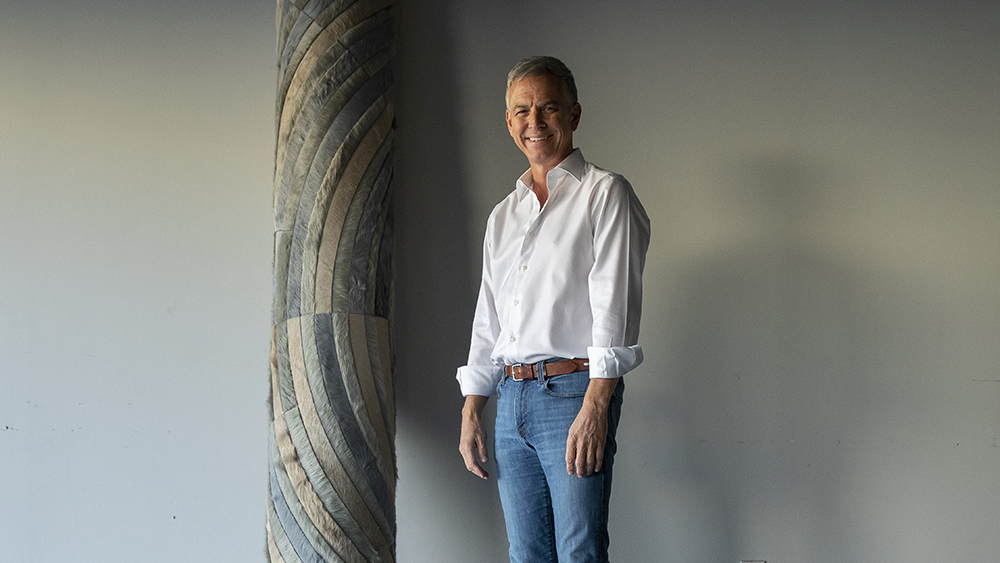 Twenty years ago, Texas-reared Kyle Bunting, a television executive living in San Francisco, bought his first home, hired his first interior designer and ordered his first handmade carpet. The rug, a hand-knotted Christopher Farr, provided him with a eureka moment. He asked himself, “What if I was to make a carpet that was contemporary and colorful but made of hide, like my dad did?”

The elder Bunting was a cowhide hobbyist, and around 1978, he made two rugs for a man in Irving, Texas. Although he never made another rug, his mosaic cowhide carpets left a lasting impression on his son.

After his revelation, Bunting jetted across the country to beg his father to show him how he’d produced those designs. “I left 24 hours later with the tools, went and picked up a studio space and started experimenting.” While skeptical friends and family—Dad included—saw his new career as a boutique endeavor, nothing deterred Bunting. Today, having returned to his Texas roots, he’s known for making handmade hide rugs out of his studio in Austin. And he continues to innovate by using cowhide in creative ways (think pillows, upholstery, wall coverings, selfie walls and framed art in unexpected patterns, depths, shapes, sizes and colorways).

To date, Bunting and his team have made more than half a million square feet of custom rugs—more than enough to cover the floors of Windsor Castle—and a total of $100 million in revenue. His pieces have been featured in the homes and/or offices of Tommy Hilfiger, Kris Jenner and Carole Radziwill, among others, and are the darlings of many interior designers nationally and abroad.