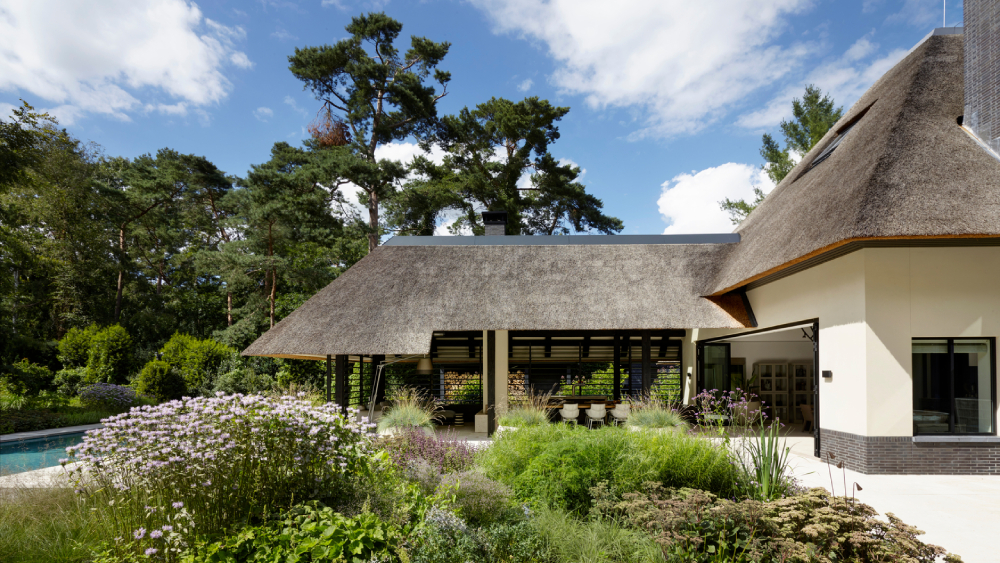 When Dutch designer Piet Boon saw the site in the Netherlands for what would become this five-bedroom, five-bathroom, 11,000-square-foot home, he wanted to incorporate the tranquility of the abutting forest into every aspect of the plan. That would mean drawing the outside in as much as possible, but also playing with light and dark spaces, the way the sun dapples the forest floor in certain pockets or shadows dominate a grove of trees. Boon had previously designed a villa in Portugal for the owner and his family, so each understood the other’s style from the outset. And this primary residence needed to be a haven of serenity, away from the bustle of the owner’s businesses—cafés and restaurants—in Amsterdam. It would also serve as a place where the family could explore their many passions: nature, wellness, wine, cooking, car collecting and brewing beer.

The bright and dark contrasts throughout the interiors add both drama and a sense of simplicity, but Boon also extended sight lines wherever he could to convey a sense of openness. He relied on symmetry—in paired objects, their placement, clean lines and the repetition of materials—to create the ease and quietude you might get on a walk through the woods.

On the exterior, he wanted the residence to blend into the landscape, so he used the traditional Dutch roofing material of hay and reeds, which is both sustainable and an excellent insulator. Thatched roofing can last for up to 30 years. “It’s very Dutch-farmhouse-style,” Boon says, “and ages beautifully.”