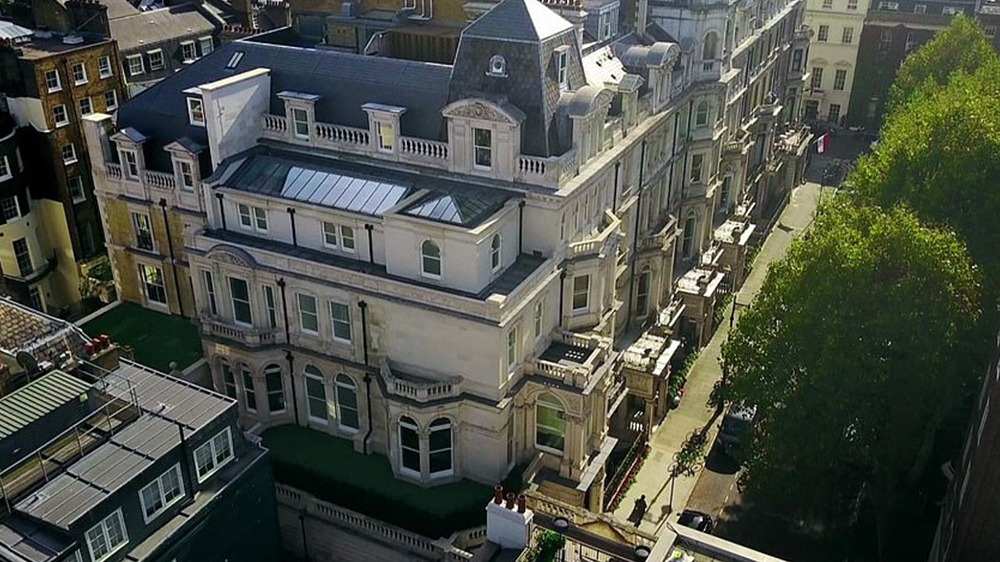 Mayfair is one of London’s priciest neighborhoods; for decades, it’s been an ultra-exclusive enclave of wealthy Arab oil tycoons and celebrity-laden nightclubs. So it comes as no big shock that what is quite likely Britain’s most expensive home is located in the posh neighborhood. What is surprising, though, is that the owner of the $300 million-plus property is John Caudwell, an Englishman with working-class roots who made his fortune through the mobile phone company Phones 4U, which he sold for £1.5 billion in 2006.

Known as Mayfair house, Caudwell’s roughly 43,000 sq. ft. mega-manse was purchased in 2012 for about $100 million. After a few years of throwing lavish parties, Caudwell recently embarked on an epic-scale renovation that reportedly ran him an astonishing $85 million.

The construction project reportedly employed 300 workers and is the subject of the new Channel 4  documentary, “Britain’s Most Expensive Home: Building For a Billionaire.” And it’s a far cry from the council estate (the U.K. version of a housing project) in which Caudwell grew up. The property was purchased from a Channel Islands trust that linked to Jefri Bolkiah, the unfathomably rich and famously profligate younger brother of the Sultan of Brunei. From the exterior, it looks similar to the many Middle Eastern banks and embassies that surround it; inside, however, it’s a theme park of opulence. Here’s a brief summary:

A dedicated philanthropist, Caudwell doesn’t intend to use the property as his main residence. Instead, he hopes to host charity events for Caudwell Children, a 20-year-old charity he founded dedicated to helping children with disabilities and their families.

“I just thought how magnificent it would be for gala evenings,” Caudwell told The Times of London about the ballroom. “It was so unique that it really did excite me, mainly from a charitable perspective, because I don’t need a house anything like that size.”

The 67-year-old billionaire is the 97th richest person in the U.K., according to The Sunday Times Rich List. He has been married once and has five children from three different relationships. He’s currently dating 36-year-old Lithuanian cycling champion and former Olympian Modesta Vzesniauskaite.

A gilded parlor with soaring ceilings.  Courtesy of Channel 4

Unlike its muted exterior, which mostly blends into its surroundings, nothing about the home’s interior is understated. Given Caudwell’s taste in sparkling, Elton John-like jackets (which are displayed on mannequins in the home), it’s hardly surprising that there’s a more than just a hint of Liberace or Louis XIV about the place. The extensive renovations of the mansion include a “volcano” wall, a swimming pool and staircases of solid white marble that connect to each of the eight floors. There’s also an Art Deco-inspired, lattice-fronted elevator, a cocktail lounge with low-lit velvet booths and a stage for live music plus an adjoining billiards room with a rose-covered ceiling.

“It really has been a labor of love,” Cauldwell said. “I was involved in absolutely every aspect of it.”

But how does the proud philanthropist justify spending such an ostentatious amount of money on a home? “The house itself is a profitable venture,” Cauldwell said. “Far from taking away my ability to give to charity, it increases it because it has increased my wealth significantly. As 70% of that is going to charity … it swells my ability to give during and after my lifetime.”

See more images from the magnificent home below: