Looking for Robb Report UK? Click here to visit our UK site.
×
By Nancy A. Ruhling

Nancy A. Ruhling's Most Recent Stories 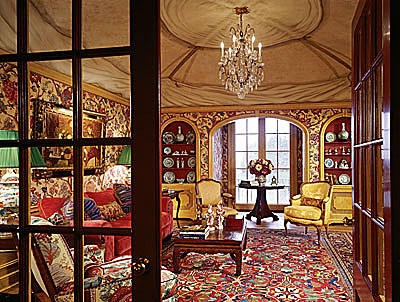 Some eight decades ago, when Long Island’s Gold Coast glittered like one of Daisy Buchanan’s diamond necklaces, the heir to a steamship company fortune crafted a mansion here that could have housed Gatsby himself. Louis Luckenbach, whose grandfather founded the Luckenbach Steamship Co., built his palace in the style of a French Normandy estate, amid 10 acres of lush gardens overlooking the Atlantic. He completed it in 1928, and while wrecking balls have ended the parties for most of that era’s other mansions, this one–with its enchanting bell tower, twin turrets, and cobblestoned courtyard–remains a commanding presence on Long Island’s North Shore.

The upstairs sitting room, where the owners often watch television, has the appearance of an exotic tent. The antique Chinese lacquer table in front of the French doors serves as a counterpoint to the other new custom pieces, including the sofa, a replica of one that Coco Chanel had in her office.

“It is a spectacular place,” says the current owner, who, with his wife and Manhattan designer George Constant, spent the past dozen years restoring the Holland brick structure room by room. “It’s elegant but not flashy. There is no other place like this. The allure is all about going back in time the minute you open the wrought iron front gate.”

By Gold Coast standards, the husband explains, the mansion is not considered large: It is two–not three–stories high and has only about 20 rooms and 11 outbuildings, including three cottages, a playhouse, a smokehouse, and greenhouses. “I’ve never bothered to count all of them, but even though there are not that many rooms, they are large,” he says. “And I don’t even know the square footage. I never thought to measure it.”

The couple, whose art collection includes old masters, French and American Impressionist paintings, and 20th-century art, furnished the mansion in the style of the 1920s, as it would have been done originally. Employing old-world building techniques, the craftsmen who worked on the restoration took as long as two years to complete some of the rooms. “This was the project of a lifetime,” Constant says. “Everything is custom made; we had a carpentry shop set up at the house, just as it would have been when [the estate] was built. The result is perfection.”

While the family acquired antiques at auction, storing them in the seven-car garage, Constant selected the wallpapers, fabrics, light fixtures, and many of the decorative accessories. “My viewpoint is more French and Italian than American,” says the designer. “The American way of arranging furniture is not as free and loose as the French and Italian [way]. I wanted to create casual yet elegant spaces.” His arrangements combine furniture and artwork from different periods and cultures in a manner that, the owners say, is very comfortable for them and their two teenage sons.

The family celebrates both formal and informal special occasions in the dining room. There, two Louis XVI—style tables seat as many as 24 for sit-down dinners, but the tables are on castors, so they can be moved for other types of events. Constant covered the walls in a French country—style cotton-linen print that is suitable for entertaining more casual, jeans-and-T-shirt guests.

During the summer, the family dines on the patio facing the gingerbread-style smokehouse, which still contains the original meat racks and fireplaces. At the back of the residence, colossal banks of steps lead to a pond where ducks and herons perform a kind of water ballet.

One of the couple’s favorite restaurants–the dining room of the Hôtel Plaza Athénée in New York–influenced two design elements in the master bedroom: the paneling on the walls and the turquoise color scheme. Constant designed the panels, and craftsmen applied seven layers of glaze to create the turquoise color. The decorator added the French latticework plaster ceiling, which features a centrally positioned medallion that is decorated with five new French bronze lighting fixtures. An artisan with a trough balanced on his shoulders produced the crown moldings by “pulling” the plaster around the room while he walked along the scaffolding. The hand-carved bed, the room’s focal point, took 18 months to make. “The finials are replicas of one I found in Venice during Carnival,” says Constant. “They are covered in brocade and crowned with silk poufs.”

When creating the interior design, Constant labored over the smallest details. In the wife’s bathroom, for instance, he book-matched the pink and cream marble on the walls and floor and installed the antique doors so that the hinges are invisible. “There is even an inset of pink marble in the floor,” he says. “And the chest where the sink is has hoofed feet, and its cabriole legs are cut out at the top so they stand out. The whole room has a luscious look, like candy.”

One decorative element, a set of four 1-foot-tall antique Chinese figural statues, took a year to complete. Constant set the statues on the library’s coffee table, the top of which is made of a Chinese screen covered by glass. “I designed one base for all four of them that puts them at different heights and has each of them looking in a different direction, so no matter where you sit, you can see one of their faces,” Constant explains.

Other intriguing elements of the house include an up­stairs sitting room, which has the appearance of an exotic tent; a six-sided tasseled tuffet, in the library, which Constant designed for the wife; and the sons’ original Art Deco bathrooms, which feature glass shower doors etched with sea horses and other designs.

Constant says this project was “a labor of love,” and he visits the estate often, sitting on the overstuffed Venetian sofa in the gallery, reading or gazing at the gardens. The fine detail of the restoration might be lost on characters such as Daisy Buchanan and her companions, but the mansion’s owners continually appreciate Constant’s design and the work that the various artisans performed on their home. “Each craftsman had his own design and personality that was expressed in his work,” says the husband. “It’s not done in a uniform pattern. I’m always amazed at how intricate the work is. Even today, after all these years, I still discover something new each time I look at the house.”