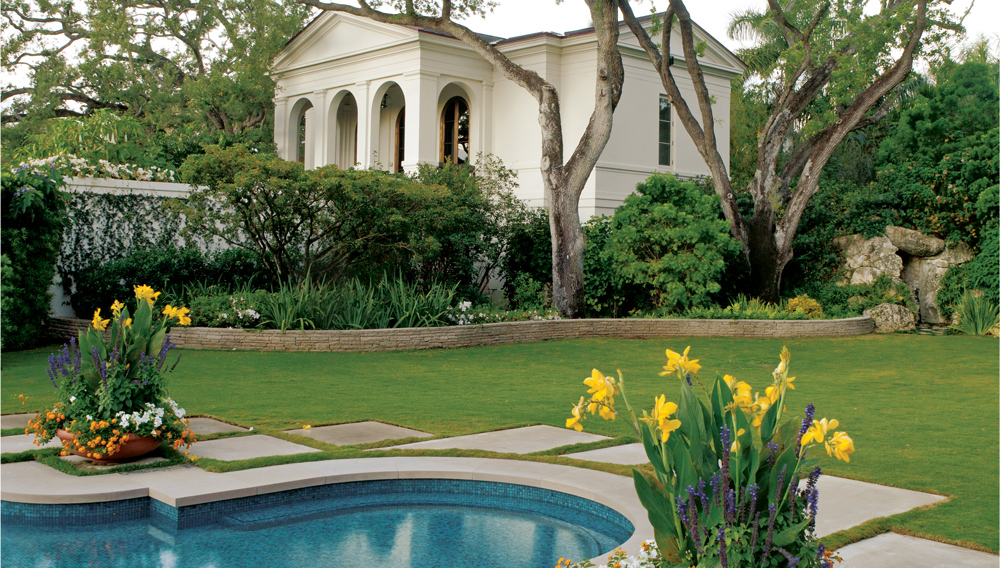 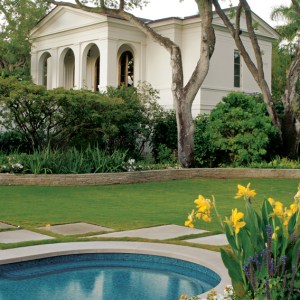 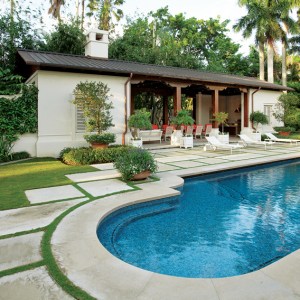 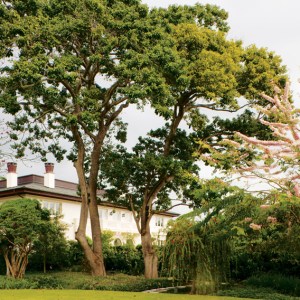 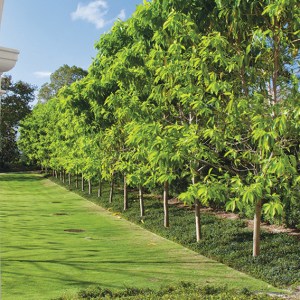 The secret to a successful garden is often just that—a secret. “A garden needs to have a bit of mystery,” says Jorge Sánchez, principal partner of SMI Landscape Architecture in Palm Beach, Fla., who recently oversaw the creation of this expansive estate garden in Miami. It is the domain of Facundo Bacardi, the chairman of the board of Bacardi Ltd.—the world’s largest privately owned spirits company—and great-great-grandson of the brand’s founder. Privacy and a sense of concealment prevail on the property. “You don’t see the garden all at once,” says SMI senior associate John Lubischer, the project manager for the Bacardi estate. “It was roomed off and beckons you on to see what’s happening in the rest of the garden.”

Bacardi, who also serves as managing director of the investment company Apache Capital, requested an atypical South Florida garden with trees and plantings mostly from the seasonal temperate zones, as well as some specimens from the tropics, all of it oriented toward his young family. “They wanted it to be a little less South Florida and not overly tropical,” says Sánchez. He notes that while some royal palms already existed on the estate (though they were ultimately transplanted to the perimeters east and west of the pool pavilion), “no heliconia [plants], no bananas” were introduced.

The landscape design team moved earth on the flat, nearly 4-acre site to create a new topography, which includes a sunken formal garden and a raised elliptical garden, and relied on the layering of trees, shrubs, and pleached hedges along the estate’s perimeter to create walls of green for privacy. (Sánchez, who is self-educated in the art of landscape design, mentions his affinity to the historic layers at grand En-glish country house gardens, most notably Chatsworth, Great Dixter, and Hidcote.) A serpentine pathway on the property’s periphery connects the various garden “rooms” and is used by the Bacardi family for daily walks, bicycling, or jogging.

A whimsical folly doubles as the children’s playhouse and is a transition between the children’s garden flanking the north side of the residence and the swimming pool “room.” In this area there is a grotto, but it is the majestic kapok tree with its great, gnarled trunk that predominates. An example of one of the largest-growing trees in South Florida, the kapok was introduced to the grounds as a focal point seen from the pool; it was also the beginning of the tree collection. “The Bacardis fell in love with the tree and analyzed that a large tree could be brought into the property,” says Sánchez. And so the tree hunting began, with Bacardi accompanying the landscape team on forays to remote reaches of southeast Florida and west Florida in quest of mature trees to purchase from private residences. “Virtually every tree was brought in, with the exception of two live oaks,” recalls Sánchez. They amassed some 80 towering trees and, with special permits, transported and transplanted them to the estate.

Sánchez’s own Florida ranch provided a testing ground for some of the trees and plantings introduced on the property. For example, he experimented with growing sycamores—trees generally found in cooler climates—and found that they did well. Hence, a long allée of graceful sycamores lines the drive leading to the estate’s porte cochere and rotunda.

The property’s residence, which was designed by Rafael Portuondo of the Miami-based Portuondo Perotti Architects, features minimal landscaping as a way of showcasing the facade . “We designed a green plinth,” says Sánchez. “It’s like an Italian villa, or an English country house in the Georgian style, where there is very little against the house.”

On the west terrace is a perennial garden planted with English-style beds, which act as a butterfly garden for the children. The Bacardis chose a palette of blue, white, and yellow—a color combination often recommended by Sánchez and inspired by a wildflower meadow he came upon while hiking in Telluride, Colo. The grouping of perennial flowers includes Agastache (blue), Asclepias or butterfly bush (yellow), and Lantana ‘White Lightning,’ all of which are planted as ground cover in the front of the garden. “We used different shades of blue and yellow in a very naturalized mix,” says Lubischer, “with white showcasing the other colors.”

The perennial gardens give way to the children’s herb and vegetable garden, which is framed by seven fountains and a wall of clipped Elaeocarpus, a type of tropical evergreen. The estate’s head gardener, a rosarian, added to this “room” more of the tea roses that Facundo’s wife, Elizabeth, likes to cut and display in the residence. “A garden is never finished,” says Sánchez.

From the loggia of the residence, the family gazes on the formal lily pond, where the hardy Nymphaea water lily floats in tranquil waters and nearby benches invite contemplation. The classical pond is edged with Japanese boxwood and finely detailed with bluestone. With a sense of impending drama, an allée of ilex, a pleached hedge of Eagleston holly, leads from this area to the next garden room, dubbed the “garden of the giants.”

Scores of mature transplanted trees surround this elliptical garden with its velvety lawn. The lawn was raised 18 inches as a plateau to obscure views of the pathway that winds around the estate; the Diamond zoysiagrass is like a “green sisal rug,” says Sánchez. The area’s frame of towering trees and shrubs includes a great baobab—a species native to the savannas of Africa and rarely seen in Florida—as well as a red silk cotton tree, or kapok; a Texas olive; a bougainvillea tree; a trumpet; a weeping bottlebrush; an apple blossom; and Natchez crape myrtles.

Scent also plays a part in the landscape design. “The scented areas in the garden are a little closer to the house, the areas that are a little more trafficked,” says Lubischer. A gardenia hedge runs between the west terrace and the classical lily pond. Intensely fragranced Michelia champaca trees surround the sunken formal garden, which is accessible by four marble staircases; a bronze pergola draped in cascading pandora vine graces the space, and urns anchor the corners. The ylang-ylang tree, whose oil has been used in Chanel No. 5 and other perfumes, offers shade to the pool pavilion’s enclosed outdoor shower. And throughout the estate, planted liberally, are Confederate jasmine and the Don Juan climbing rose, white and red beauties, respectively, with alluring scents.

The cohesive garden, with its series of unfolding rooms, is enchanting—as was the creation process, according to Lubischer. He notes, “The artist, architect, and gardener William Kent, who introduced the Palladian style of architecture to England in the 1700s at Chiswick House and Holkham Hall, said ‘all gardening is landscape painting.’ For me, what made this project a great success was the Bacardis’ willingness to give us a freedom to create, or, if you will, to paint.”