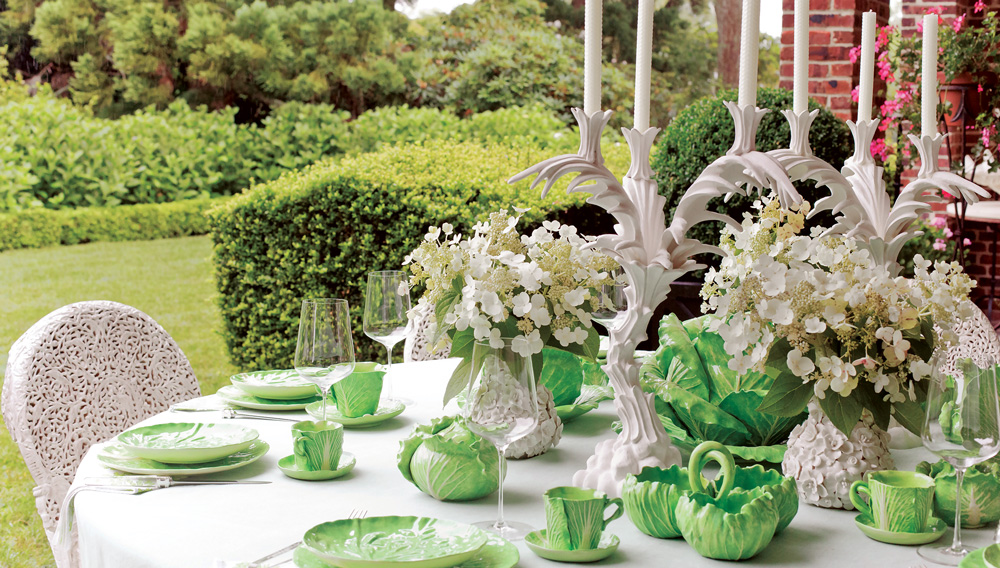 Tory Burch built an empire on brightly patterned, preppy fashion—an aesthetic she traces back to her childhood and a particularly colorful set of green pottery shaped like lettuce leaves. “My mother collected lettuce ware and I grew up around it,” Burch says. “I always loved the beautiful shade of green.”

Burch’s mother actually owned two sets of Dodie Thayer lettuce ware, one for display and one for entertaining, and would serve bright tomato salads, aubergines, and haricots verts on the plates for an even bigger pop of color. It is a habit Burch has continued with her own collection. She received her first piece of lettuce ware as a Christmas present after graduating from college—a small dish to hold her jewelry—and has collected it ever since.

Thayer, a native of Palm Beach, started making pottery out of her home using a kiln she had picked up at a craft store, as a way to help support five children. In the early 1960s, the owner of a local department store suggested she make pottery like Italy’s green Napoli ware and she gave it a try, hand-molding each piece to look like lettuce leaves, down to every curl, stem, and vein. The pieces were an instant hit with socialites in Palm Beach and beyond: Brooke Astor, Jacqueline Kennedy Onassis, the Duchess of Windsor, and C.Z. Guest all collected Thayer’s green ceramics. There were even wait lists. Thayer, who is now in her late 80s, stopped making lettuce ware in the 1980s, and the pieces have become even more coveted. A tureen that sold for $125 in the mid-’60s can now fetch as  much as $7,000. In 2012, Astor’s 218-piece collection sold at Sotheby’s for $74,500.

Burch’s collection is displayed in a breakfront in her home in Southampton, N.Y., and she is always on the lookout for more. But a few years ago, she took matters into her own hands: She enlisted Thayer to collaborate on a new line of lettuce ware for Burch’s home collection, and it debuted in the spring. “I don’t think she got the accolades she deserved,” Burch says. “I have so much admiration for her.”