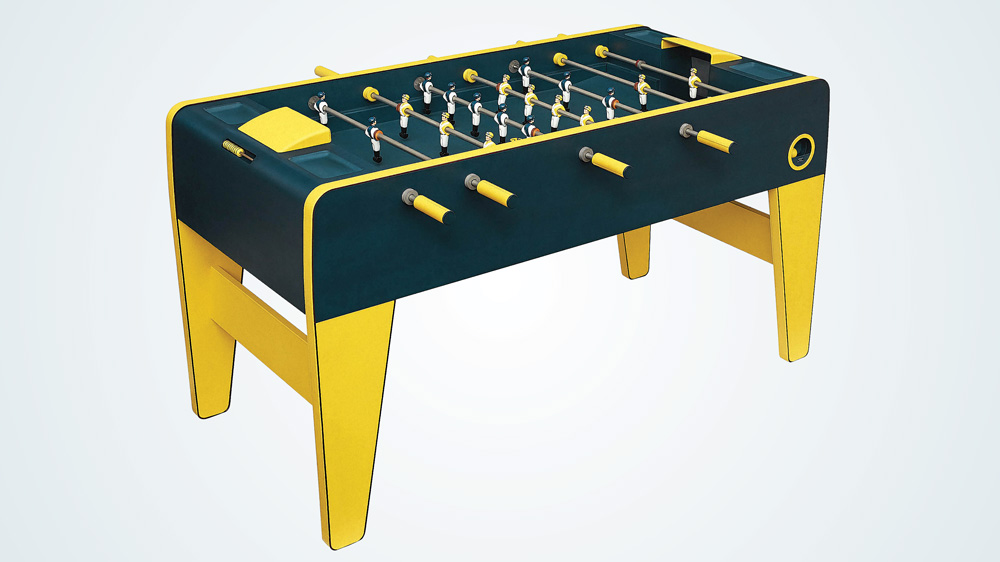 File it under leisurely pursuits: Foosball hasn’t quite met the same rigorous Olympic standards as most conventional sports, but it does require hand-eye coordination, grip strength, and a willingness to berate figurines for missing an open goal as if they were flesh and blood. (Those who prefer not to sweat can opt for darts or back-seat driving.)

Trust Hermès to reimagine society’s most jovial Pilsner-soaked diversion with this elevated incarnation. There are chic game tables and hearty diversions, and then there is this maple and Swift calfskin ($73,600) creation. It’s an item for competitive design people who want to win at everything, including standing still.

But in a civilized tournament, the dirtiest tactics are subtle, quietly diminishing the fighting spirit of others. In that case, superb design is the weapon, meant to rattle opponents into a state of supreme inadequacy. Should I have a special edition, legacy brand foosball table with saddle-stitched upholstery and leather-wrapped handles? Is that copying? What if it was monogrammed?

“Hate the player, not the game,” taunts the preppy victor, topping off another glass of Macallan while pushing back the investment meeting via text.

But design artefacts are not responsible for insufferable owners. The French house does not choose sides, opting to showcase its finesse with quality execution, enticing both the willing and curious with a cast of hand-painted jockeys (not soccer players, note) who appear freshly scrubbed and ready for the challenge. Each team races across a supple Hermès leather field, which means any rimmed evidence of an adult beverage would be grounds for instant divorce.

It takes artisans 60 hours to create each player, with special attention paid to their carefully created jerseys—meant to resemble silks. A varsity rush of bleu de Prusse and jaune soleil gives the entire piece a patrician update to chance it in the big leagues. But sport is not a fan of the demure.

Expect that any competitive characters invited to play will indulge in some raucous, high-end fun that comes with significant aesthetic risk and a call to the insurance agent.  But as a work of design, this might be the only foosball table in history that outclasses its category. Victory is assured for the very humble among us.