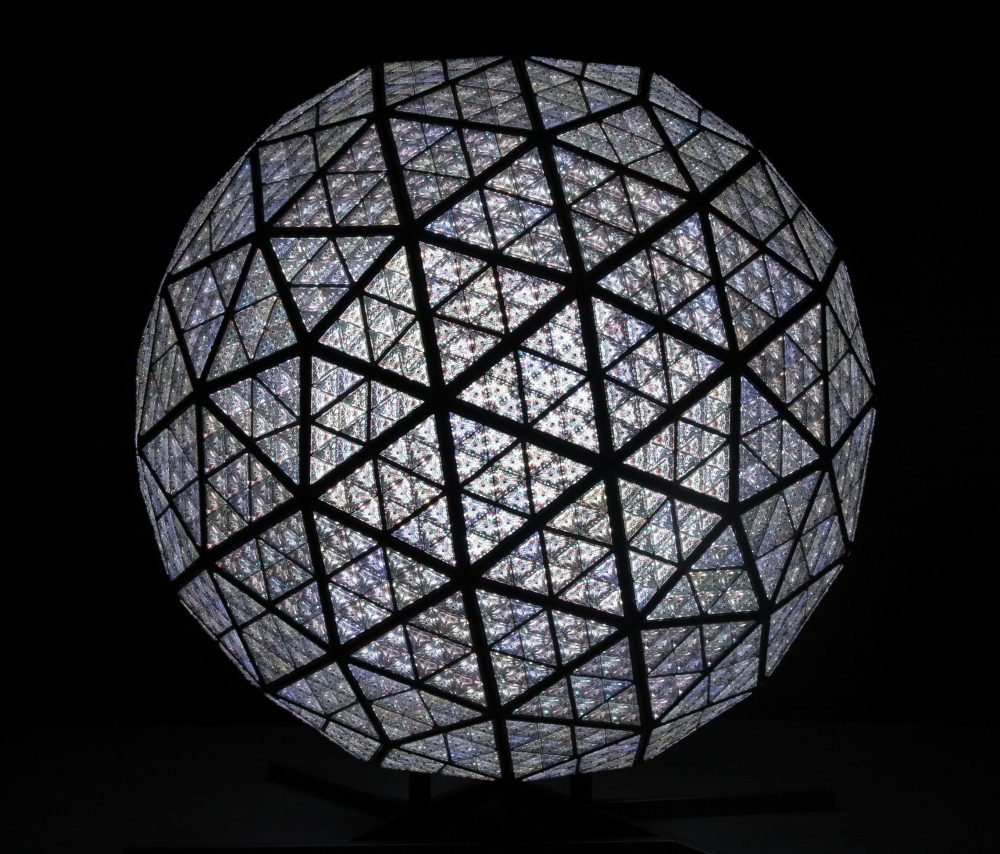 They call New Year’s Eve “amateur night” for a reason. That might explain why the staying-in crowd usually gets the best sommelier-approved sparkling wine before everyone else. Going out has its merits though, style being high among them. Regardless of how you celebrate, there is one tradition that is essential: watching the New Year’s Eve Ball drop. Given that everyone will be fixated on the Times Square broadcast and that momentous countdown, we started to wonder about the history of the glittering orb that descends at 11:59 p.m. every year—a tradition that seems as quirky as it is hypnotic.

To start, the Ball is not just flashy, made-for-TV set design. It is an actual crystal sphere created by the historic Irish house of Waterford. While the company is best known for barware and crystal tabletop, Waterford has, for the past 19 years, stewarded our passage from one year to the next with its official and dazzling Waterford Times Square New Year’s Eve Ball. And while December 31 finds us at our sappiest and most bright-eyed, the history behind this year-end practice is as enchanting.

Revelers first gathered in Time Square in 1904 thanks to the intrepid and prescient Adolph Ochs, owner of The New York Times. To commemorate the paper’s new (and impressive) Times Tower headquartered on 7th Avenue, Broadway, and 42nd Street, Ochs threw a no-expenses-spared bash complete with a fireworks display. The party was a smash success, and it lured people away from the wholesome preoccupation of listening to church bells at midnight. The festivities were further enhanced by the fact that he had successfully convinced New York’s Mayor George McClellan to rename the area Times Square.

While his masterful stroke of branding essentially shaped the modern way of ringing in the new year, his contribution to this glittering century-old tradition was born out of a rather banal problem: He couldn’t get permits. In 1907, Ochs was unable to obtain permits for his New Year’s Eve fireworks extravaganza. Undeterred by what is today an equally exasperating problem, Ochs conjured up the ultimate design hack: He commissioned an enormous, 700-pound ball to be lowered from the flagpole at One Times Square just before midnight to mark the transition from 1907 to 1908.

While it seems peculiar to witness the descent of a large ball as the marker of a significant event, “time-balls” had been in existence for years in England.  Originating in the 1800s, they were meant to serve as a practical tool for mariners who need to precisely calculate longitude. One well-known example was the time-ball positioned atop England’s Royal Observatory at Greenwich in 1833. Every afternoon it would drop at 1 p.m., an indication for captains in nearby ships to set their chronometers. Despite rampant inaccuracies and inconveniences for that effort, land dwellers embraced these time-keeping orbs. Several U.S. cities, both on coasts and in between, had time-balls. Citizens reliably set their clocks and watches to them. Western Union famously had a time-ball installed on its New York building in 1877.

The first NYE time-ball, arranged by Ochs, was massive. It measured five feet in diameter and was made from tried-and-true materials, wood and iron. A German immigrant metalworker named Jacob Starr created the Ball, and for most of the 20th century, his company Artkraft Strauss would have the honor (and pressure) of lowering it each New Year’s Eve. For visual kicks, Ochs had the Ball festooned with 100 25-watt light bulbs, an elegant characteristic we have come to expect from our annual New Year’s talisman.

Throughout its history, seven renditions of the Ball have come into existence. In 1920, a 400-pound iron Ball replaced the original. 1955 saw a 150-pound aluminum Ball with 180 light bulbs illuminate the sky, and by 1995 that aluminum wonder was upgraded with computer controls and rhinestones, naturally. Anyone who remembers the Y2K era might recall the sky-is-falling hysteria surrounding New Year’s Eve. Still, 1999 was a significant year for the Ball, as organizers turned to Waterford for a crystalline globe that would usher in the new millennium. (For trivia players: There have been only two times—in 1942 and 1943—that the Ball dropping ceremony was suspended. This was due to a wartime “dim out” of lights in New York, though the party raged on.)

For nearly two decades, Waterford, whose history stretches back to 1783, has been the sole arbiter of this iconic New Year’s Eve custom. Each year, the company’s designers introduce a new, signature cut crystal pattern and the Waterford Ball receives a gleaming update with new crystal triangles. In two days, the world will see the unveiling of the custom-designed Gift of Serenity motif, which will adorn 288 of the 2,688 crystal panels on the Waterford Times Square New Year’s Eve Ball.

The Gift of Serenity design features a cut pattern that resembles butterflies. It is meant to inspire tranquility and composure, and it is the fifth gift in a 10-year Greatest Gifts series that will be showcased on the Waterford Ball through 2023. An accompanying Times Square Holiday Collection includes ornaments, champagne flute pairs, and a 14-inch engraved vase in tribute to the annual ball drop celebration.

For all its aesthetic and sentimental appeal, the Waterford Ball is also a 21st-century technical fascination. Described as a “geodesic sphere,” it is 12 feet in diameter and weighs 11,875 pounds. All 2,688 of the Waterford crystal triangles are bolted to 672 LED modules, which are in turn attached to the Ball’s aluminum frame. To achieve that high-wattage glow, creators rely on the modern world’s favorite light source, LEDs. The Ball is illuminated by 32,256 Philips Luxeon Rebel LEDs, with each module containing 48 Philips Luxeon Rebel LEDs, for a total of 8,064 of each color (red, green, blue, and white). The Ball is also capable of displaying a palette of more than 16 million colors and billions of patterns.

While that is itself a dizzying reality, is it interesting to note that this detailed, planned, and highly elaborate effort takes place for months and months every year only to culminate in 10 glorious seconds of joyful elation that will hopefully end with a very good kiss. That is also a tradition whose history is worth exploring, not actually questioning.