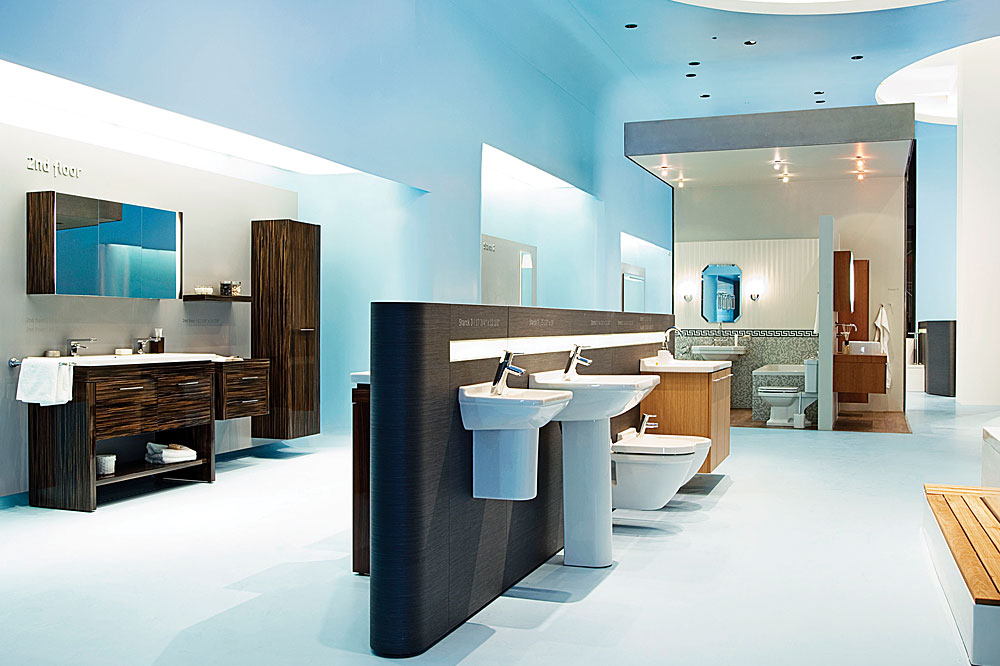 The 100 block of Madison Avenue in New York is not known for having a calming effect on passersby. Structures that house this month’s hottest fashion labels and frenetically paced advertising agencies occupy nearly every address, and almost seem to exude adrenaline. One location—105 Madison, the home of the new Duravit showroom—is an exception. With its uncluttered spaces and blue-washed walls, this unusual showroom lulls customers into a state of calm by creating an underwater-like ambience. That Duravit would take such a novel approach to the showroom’s design should come as no surprise to those familiar with the company’s work; the almost 200-year-old German firm has built its reputation by applying innovative designs to the most mundane bathroom products.

Duravit began creating uncommon designs in 1817, beginning with earthenware crockery and evolving eventually into bathroom systems. “Throughout the years,” says Franz Kook, Duravit’s CEO, “our company has consistently been defined by new and successful designs that capture the spirit of the coming age.” In keeping with that spirit, Duravit now works with some of the world’s most influential designers and architects, including Englishman Lord Norman Foster, American Michael Graves, the Austrian firm Eoos, and the German company Sieger Design.

The new showroom—a 4,000-square-foot, two-story space that opened last November—is Duravit’s first showroom in the United States and the only store in the country that is dedicated to displaying all of the company’s current bathroom collections. The company charged Stuttgart-based architects Schmutz & Partner with the task of creating a space that would make design novices feel comfortable while still reflecting Duravit’s cutting-edge yet whimsical approach to design. Thus the showroom is a composite of individually styled vignettes that flow seamlessly from one to the next. Walls of tranquil blue intersect massive oval openings in the ceiling that expose the building’s infrastructure; the result, according to Schmutz & Partner, is “a flowing, floating space with a weightless atmosphere.”

The showroom’s fluid, open layout also was designed to adapt to the company’s ever-growing range of product collections for the bathroom and for other rooms in the home. For example, the PuraVida line, which Duravit is developing in conjunction with German fixture manufacturers Hansgrohe and Phoenix Design, will reach new heights in the store: Nearly every piece in the collection, from sinks and bathroom storage systems to toilets and bidets, will be wall-mounted in the showroom to create a floating, ethereal effect. The forthcoming Starck K kitchen collection—the brainchild of French designer Philippe Starck, who has been creating products for the company for more than a decade—is expected to make its debut in the Manhattan venue next year.

Duravit may have settled into one of New York’s trendiest avenues, but Duravit’s CEO maintains that his company’s time-tested approach to creating more sophisticated bathrooms will be an enduring one. “New forms always run the risk of becoming fashion trends,” Kook says. “But our designs always appeal to emotions and feelings, which last much longer than the latest trend.”