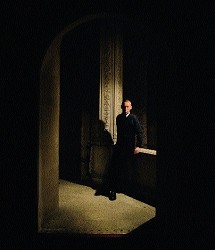 “All good interior design needs a frame of good, if not great, architecture. The better the architecture, the less one has to decorate.” Throughout his distinguished career, David Mlinaric has worked with some remarkable, mostly British, frames: Spencer House, Waddesdon Manor, the Royal Opera House, the National Gallery, and the British Embassies in Paris and Washington, D.C. For those projects and for the private residences he has undertaken, he taps into the vocabulary of ancient Egypt, Greece, or Rome and Renaissance Italy. “My work is interpretive, and for it one needs a historical imagination,” says Mlinaric. “The best client is the one who knows as much and, if possible, more, than I do.”

He attributes the popularity of the recently completed British Galleries at the Victoria and Albert Museum to the vivid color palette and the carefully thought-out progression from modern displays to period rooms. Now Mlinaric has embarked on a restoration of Asprey, the venerable jewelry, silver, and leather goods store on Bond Street. “The building is actually made up of seven 18th-century houses, all hardly recognizable after years of neglect, alteration, and concealment,” he says. “We will show them in their original form as the ‘shell’ of the new shop, with modern fittings. There will also be some magnificent new areas, including an atrium courtyard by Lord Norman Foster. Asprey will have the best of both worlds, and I am certain this is the way forward for historic buildings.”