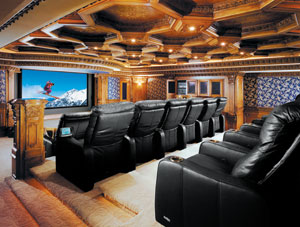 Mr. G, a New Jersey businessman who prefers to retain his anonymity, did not get the home theater that he wanted, and he could not be more pleased. He initially envisioned and requested something simple, not a project that the nation’s leading electronics installers would recognize as one of the best home theaters built in 2003. “When I was a kid growing up in Brooklyn, there was a theater called the Oriental,” Mr. G says with an accent that confirms his Brooklyn roots. “It had all of this fancy plaster work, and when my brother—he thinks I’m crazy—came in and saw this room, he said, ‘This is the Oriental!’ ”

Mr. G’s Oriental began taking shape when he called a meeting with Joe McNeill, a systems designer with Electronics Design Group, an electronics installation company in Piscataway, N.J., and Robert So of Robert So Designs in Nutley, N.J., who had designed Mr. G’s house three years earlier. Mr. G already knew what he wanted: an unadorned and unpretentious theater that could accommodate at least 16 people—he frequently entertains and enjoys being surrounded by his large family—and could incorporate the largest screen possible. As he was explaining his requirements, So picked up a pen. “Robert begins sketching, and I say, ‘What are you doing?’ ” recalls Mr. G. “He says, ‘Just doodling.’ ”

The drawing featured an elaborate coffered ceiling with inset lighting and octagonal recesses trimmed in ornate molding. “What is that?” Mr. G remembers asking. “I wanted it simple. When [my wife] saw [the sketch], that was it.” Mrs. G reminded her husband that what he had in mind would not match the detail found in the rest of the home. McNeill added that the coffered ceiling would serve a practical purpose, explaining that the undulating ceiling would break up standing waves that can cause some sound frequencies to become over-emphasized or, at the other extreme, inaudible. The debate and the doodling continued. So sketched different levels of seating with oversize theater chairs, pilasters, more wood trim, and fabric panels. At Mr. G’s request, he also scribbled in a bar with tall stools behind the back row of seats. “We needed a place where our son could watch TV with a bowl of his mother’s pasta,” explains Mr. G. When the 26-by-34-by-9-foot room was completed, 90 percent of its design was true to that first sketch by So. A later version would include a coffee table placed near the center of the room to mask the projector.

Because So works from perspective drawings, leaving measured plans and blueprints to the contractors, the EDG crew needed to map out the space before they could begin working. “To make all of the seating work, we had to tape out the concrete floor, [mark] where all of the risers were going to go, how deep they were going to be,” says McNeill. “Then we had to bring one of the seats to the site to make sure it fit and wouldn’t obstruct.” Mocking up the space showed that it would accommodate 22 seats.

The designer relegated all acoustic and electronic decisions to EDG because, So says, he finds these issues exasperating. “This is where the whole industry drives me crazy,” he says. “Some [theater designers] come in and say you need acoustic panels. Some just let me put in padded panels, heavy drapes, and upholstered chairs. They have no set rules for what creates the best sound.” The same goes for electronics, he adds. “I can’t tell the difference between a [film’s] bomb explosion from a $100,000 speaker or a $30,000 speaker.”

McNeill, however, had some definite ideas for creating the best sights and sound. “Typically, the electronics are selected first,” he says. “They always drive the design of the room. The client said, ‘I want a huge screen,’ so that was going to take up a certain amount of space in the front of the room.” McNeill determined that a 117-inch screen was as large as the space could accommodate, and after auditioning projectors, Mr. G chose a Sony G90 with 9-inch guns. “I’ll tell you the truth,” Mr. G says, “the picture looked almost three-dimensional.” A cathode-ray tube projector requires precise placement, and with the Stewart Studiotek 130 screen that was selected, McNeill needed 12 feet 8 inches between the two. This meant that the projector had to be situated in the middle of the room, hence the coffee table. “We really had to work around the projector and screen size,” says McNeill, adding that he did not want to install the projector in the ceiling because that would have entailed carving into So’s beautiful design.

Because the theater’s seating is elevated, McNeill used a microperf screen, which allows sound to pass through, and placed the center speaker behind it. Often, McNeill explains, designers place the center speaker underneath the screen, which, when seats are on risers, causes the sound to fire into the legs or chests of the people in the front row.

The system can display high-definition TV, off-air HDTV, DVDs, programming recorded on TiVo and video tapes, and Sony PlayStation 2 and Xbox video games. Of course, it also plays audio CDs. The components are housed in a Middle Atlantic rack concealed in a custom cabinet in the wall to the right of the screen. Every electrical device in the room is operated by a wireless touch pad controlled by an AMX Viewpoint system, which can be prompted to perform a series of operations by pressing one button. Use the touch pad to select DVD as the video source, for example, and the drapes in front of the screen will open, the lights will dim, and the face of the touch panel will display buttons to control the DVD player.

One of the first DVDs Mr. G viewed was a James Taylor concert filmed in the Beacon Theater. The experience convinced him that he had the theater he wanted after all. “It blew me right out of my seat,” Mr. G recalls. “You could see beads of sweat dripping down him. I was sweating just watching.”