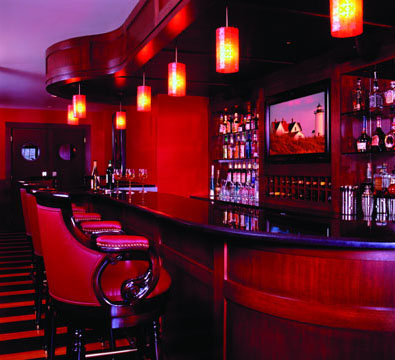 The atmosphere is easy, relaxed. A woman’s laugh intermingles with the strains of a lilting, lazy guitar solo and floats over the crowd. The barkeep pauses, nodding appreciatively at the stage before pouring another round. It is a scene that plays every night at clubs throughout the world. However, this particular venue is among the world’s most exclusive. It holds fewer than 100 guests, and all of them are VIPs, because you absolutely have to know the right people to get through the door. This club is in a Concord, Mass., couple’s 13,000-square-foot, sprawling, Colonial-style house. The basement includes a stage for a five-piece band, a sophisticated audio/video system, a pool table, an inviting mahogany bar, lounge seating, and an adjacent theater.

The idea for a nightclub was born of the homeowner’s desire for a space where he could rehearse and perform music. “Originally, this was going to be a poolroom,” explains the corporate executive. “It was between that and a wine cellar, and I’m not really a wine guy. Then I started thinking more along the lines of a bar.” As a lead guitar player in a neighborhood band, he wanted to be able to plug in and play whenever the urge struck. “I didn’t play my guitar on any regular basis because it was such a hassle to pull the amp out of the attic, dust off the guitar, and try to play where it wouldn’t bother the rest of the family.”

Thomas Huth, the architect for the project, was a natural choice in part because he has designed commercial spaces in addition to residences. Although the club is in a home, Huth did not treat it as just another room. In fact, he relied on his commercial sensibilities rather than following the traditional rules of residential design. “The millwork detail and the way the light catches it at certain times of the day, and the way light moves across the room, are some of the things to consider in a traditional residential setting,” he says. “You layer color in a house so that it looks different during different times of the day. The color is enhanced by different light as the light moves through the room.” But when he designs a commercial space, he tries to achieve a single, consistent ambience. “Everything is subverted to that one atmosphere. In a nightclub, people are socializing, so you want to create an atmosphere where people can socialize and feel attractive.”

You enter the club either through French doors that lead into the walkout basement or down a spiral staircase in the study. A wall encloses the stairway to help ease the visual transition between two very different spaces. It also adds a decorative element to the club. “It looks just like a piece of ribbon,” Huth says about the staircase. “It looks very much like an abstract sculpture.”

Across from the stairs is a sinuous bar designed to offset the square lines of the stage and the rest of the room. “I needed the bar to activate the space and make it more dynamic than what a basement might be with just a square bar in it,” Huth explains. “If you take a curvy line and draw it close to a straight line, you’ve got some tension between the two.”

Once the atmosphere of the bar was determined, it was time to focus on the music. For those times when no one is performing, the nightclub comes alive with the home’s Escient TuneBase distributed music system, engineered by Cutting Edge Systems Corp., a custom audio/video design and integration company. Combining the music system with the numerous electronic sources, including the lighting, video, security, telephone, and HVAC, proved tricky. “The biggest issue was the interface—the usability,” says Elliott Jackson, Cutting Edge Systems’ marketing director. “We had to maintain a simple-to-use system, while keeping the overall performance and functionality that the client wanted.” One function that the homeowner wanted seemed simple enough: the ability to turn on and off each of his Runco TVs. However, each time he pressed the touchpanel to turn on either the TV across from the bar or the one by the billiard table, the plasma screen above the bar also responded— the TVs share the same infrared codes. Working out the kinks entailed collaborating with Xantech, a control systems company that developed a plasma-proof infrared device.

As for the control system’s audio capabilities, one of the homeowner’s favorite features enables him to play backup with any of the bands cataloged in the Escient server. From the AMX touchpanel on the stage, he can play any of the songs in the system through the nightclub’s Snell AMC800 in-wall speakers and the stage’s sound system. Using the on-stage mixer, he can then add his guitar licks to the music.

While the musician side of the homeowner appreciates the convenience and flexibility of his in-home nightclub, he says the best thing about this space is that it provides him and his wife with opportunities to spend more time with their family and friends. Last Father’s Day, for instance, a band made up of fellow part-time musicians from the neighborhood played for 60 guests, who moved easily into the bar after spending the day beside the pool. “We definitely do more entertaining now because we have the environment for it,” says the homeowner.

And as the regulars at his club undoubtedly can attest, he also does more practicing. “Having all of my musical equipment there in the racks ready to go, and being able to just flip a switch, I find myself down there for hours a week, just learning new songs and playing. I have become a better musician because of it.”