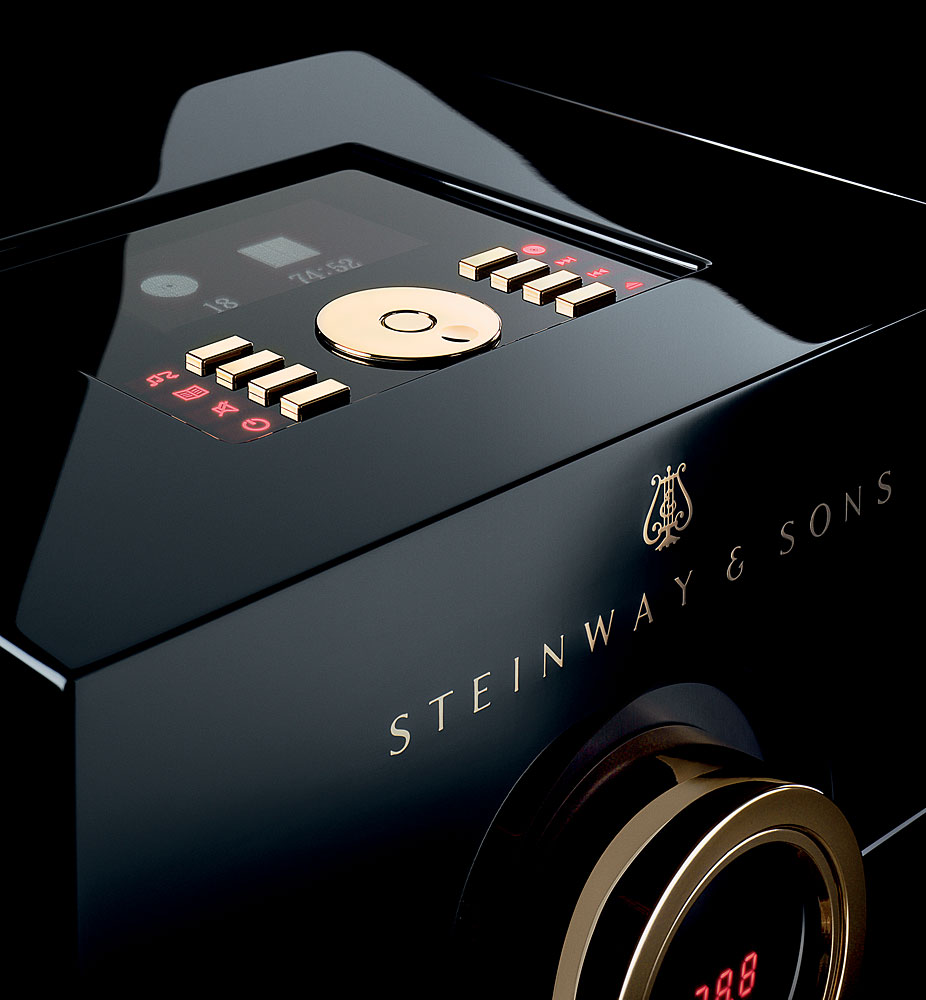 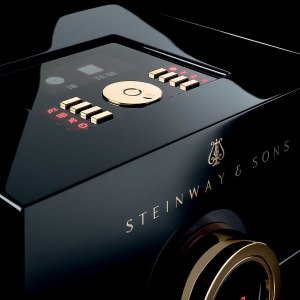 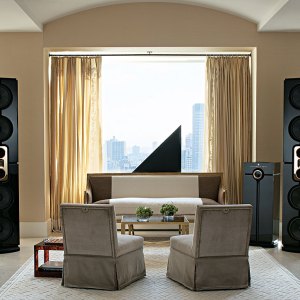 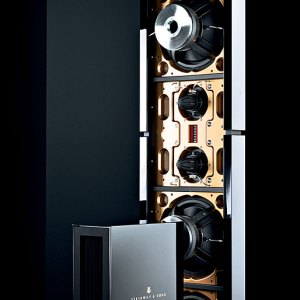 It should come as no surprise that the latest item from Steinway & Sons has 6-foot strings, a lustrous black lacquer finish, and a stunning sound. It does, however, offer several features never before found on a Steinway product. First among these is a power cord.

Second is the item’s user-friendliness: You can play the new Steinway every bit as well as Emanuel Ax, Diana Krall, or Billy Joel could. And third, it is the first Steinway product that does not produce music; it reproduces it.

The Steinway Lyngdorf Model D Music System, which is priced from $150,000, is no less imposing than its namesake, the Steinway Model D grand piano. The system’s speakers stand 7 feet tall. The control center that contains the CD player and much of the audio circuitry appears solid enough to support a life-size marble sculpture of Mozart. And its eight 12-inch carbon-fiber woofers seem poised to knock you right out of your chair. Next year, the company plans to introduce a home theater system that employs the Model D as its core component.

The idea for the sound system emerged from Steinway’s desire to expand beyond its core piano business without compromising the integrity of its brand. To this end, the company teamed with Peter Lyngdorf, who is known in the audio world for creating the TacT Millennium, the first digital amplifier to earn acclaim among audiophiles. For Lyngdorf, it was a dream project. “Accurate reproduction of the sound of a Steinway piano was always a key goal of mine,” he says.

He soon found that Steinway’s objectives differed greatly from those of the companies he has headed in the past. “Working with Steinway is almost intimidating,” he says. “To be a Steinway product, it must be extraordinary.”

Naturally, Bruce Stevens, president and CEO of Steinway & Sons, agrees. “There are certain guiding principles about who we are,” he says. “If someone presented us with something that just sounded OK, or that had pink polka dots, that’s not us. Our product has to set the tone. It has to be unbelievably great.”

Lyngdorf’s most daunting challenge was to create an audio system that would last indefinitely. Steinway wanted a product that would be as enduring as its pianos, which can outlast their owners. But because of the rapid pace at which audio technology advances, most high-quality audio systems become obsolete within 10 years or less. Lyngdorf addressed the longevity issue by fitting the control pedestal with digital circuitry that can be updated regularly through software and replaced entirely when new technologies emerge. “We expect to change the digital processing board in the system at four-to-five-year intervals,” Lyngdorf says. “The bulk of the system—the speakers, the amplifiers—will last for many years. Even after 50 years, this will still be a wonderful system.”

In contrast to Steinway’s pianos, which incorporate mechanics and materials that barely have changed in a century, the Model D Music System uses some of the most advanced audio technology extant. This includes the four 400-watt digital amplifiers, two for each speaker. With a typical audio system, digital audio from CDs is converted into analog audio signals before it leaves the CD player, and then the signals degrade as they pass through preamplifiers, amplifiers, and cables. The Model D’s digital amplifiers allow the audio to remain in pristine, digital form all the way from the CD to the speakers.

Another benefit of the all-digital system involves the wiring. Ordinary Cat-6 cable, the same kind used in many office computer networks, runs between the control pedestal and the speakers. You therefore have no need to invest in exotic audio cabling or to worry about what effect that cabling might have on the sound.

The Model D’s digital technology also includes Lyngdorf’s RoomPerfect processing, which, through an internal computer, compensates for a room’s acoustical problems. This technology enables the Model D to achieve excellent performance even in spaces that are not optimum for sound reproduction, such as living rooms with marble floors.

Steinway stipulated that the system’s exterior finish had to match—not just approach—the quality of the pianos’. Thus the Model D’s high-gloss parts are sent to Steinway’s factory in Hamburg, Germany, for finishing. The music system is available in any standard Steinway color. “And all the panels are detachable,” Lyngdorf points out, “so if you get a big scratch in one, you can just change it.”

The rubber “strings” that stretch from the foot to the top of each speaker were added to help protect the speakers from accidental injury—and, of course, because they call to mind the strings of a Steinway piano.

A weighty metal knob on the center of the pedestal controls the volume, and a slot on the side accepts CDs. You can manage all of the system’s functions remotely or with the controls that are positioned on the top of the pedestal. Other audio sources, such as a radio or record player, can be connected to the system.

The standards that Lyngdorf and Steinway set for the performance of the Model D Music System are as rigid—and as difficult to achieve—as the company’s goal of product longevity. “The system must be capable of accurately reproducing a Type D piano, at the same volume as if you were standing next to it,” Lyngdorf says. “It should also be able to reproduce the sound of an orchestra at realistic levels in a fairly large living room. And, like a piano, the system will be used to play many different genres of music, so it must be capable of rendering them all faithfully.”

Indeed, a lengthy demonstration, in a large suite at the Peninsula Beverly Hills Hotel, proves the Model D Music System’s impartiality when it comes to music. Every genre of music we play—from a recording of a Model D piano to the Miles Davis Quintet to Mötley Crüe—sounds perfect. In comparison, many high-end audio products present jazz and classical well but sound unconvincing when playing rock.

The Model D’s bass is not only strong but also swift, like a skillfully delivered punch from a middleweight boxer; the system never sounds bloated or boomy. And we cannot recall hearing a system that depicts so flawlessly singers of both genders in such a variety of styles.

The detail of the sound almost overwhelms us; it seems as if we can pick out every single wire of a drummer’s brush as it scrapes across a cymbal. What makes the sound especially engaging, though, is that it is so enveloping. And because of the RoomPerfect technology, listeners in many different parts of the room, not just the person seated between the speakers, can enjoy that sound equally.

Steinway will not allow dealerships to offer Model D components separately. “Most people try to put together a lot of components to make a good-sounding system,” says Lyngdorf, explaining the reasoning behind this restriction. “We feel that’s like buying a car by buying a separate engine, chassis, gearbox, and so on. We don’t want any risk that this isn’t going to perform perfectly.”