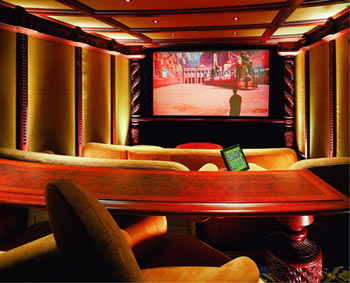 While moonlighting as an audio-visual consultant, Lewis Lipnick, the contrabassoonist for the National Symphony Orchestra, had designed sound systems for clients including architect Richard Meier and conductor Mstislav Rostropovich. But after he promised a Scottsdale, Ariz., homeowner that he could design and construct the best home theater in the world, he began having doubts. Such a feat would mean surpassing the Stag Theater, which belongs to Star Wars filmmaker George Lucas—whose THX Group sets the standard for sound reproduction in commercial and home theaters.

Feeling an increasing sense of dread, Lipnick telephoned Jerry Steckling, one of the Stag Theater’s designers, and inquired whether it was even possible to exceed Lucas’ movie house. Steckling, intrigued by the challenge, volunteered immediately to join the project. “That sounds like fun,” he told Lipnick.

The musician and the soundstage designer teamed up with interior designer Jeremy Morelli, who, after a crash course in acoustics, fashioned a home theater of understated appearance, but one with sound so clear that viewers can hear the difference between dialogue recorded on a film set and dialogue recorded in a studio and added during postproduction. “The trouble is,” laments Morelli, “this theater has ruined my movie-going experience because nothing is quite like it.”

From the outset, the team’s mandate was clear: “We wanted full-scale cinema,” says Lipnick. Every detail of a movie soundtrack needed to be crystal clear, and the room had to convey the same sense of space intended by the particular filmmaker. “What gives you the sense of detail?” asks Lipnick. “It’s not the explosions; it’s the crickets in the background.” To achieve this level of sonic detail, it would be necessary to isolate the room acoustically from the rest of the house. The solution was to create within the existing concrete walls a sandwich of lead-lined Sheetrock (the type commonly used in X-ray labs), a sheet of special vinyl designed to silence submarines, and a final layer of standard Sheetrock. The soft, dense lead and vinyl are extremely sound-absorbent.

Lipnick also typically designs a theater with its own heating and cooling system so that sound cannot travel through the air ducts to the rest of the house. Otherwise, he says, “the bass will go right through those ducts and sound like an organ pipe.” The separate HVAC system addresses another problem as well. Because electronic gear generates substantial heat, the theater might need air-conditioning even in cooler weather, when the rest of the house requires heat.

Simply making a room quiet, however, does not ensure that it sounds pleasing. The 26-by-18-foot wedge-shaped room did not lend itself naturally to accurate sound reproduction, so acoustical materials that absorb, diffuse, and reflect sounds were needed to tune the space. Many theater designers rely heavily on sound-deadening material, which Lipnick regards as disastrous: “A dead room makes it feel like you’re in a closet. What you want is to make the room feel spacious.” He prefers sound diffusers from RPG Inc., which remove audio glare from sound just as frosted glass eliminates optical glare from light.

While Lipnick, the musician, can determine a room’s acoustics simply by studying a blueprint, Steckling, the soundstage designer, takes a more Zen-like approach to his role. “I’ll sit in the space and get a mind’s eye about what is going to be there,” he says. “Sometimes it takes me 15 minutes or a half hour. Sometimes it takes me four hours.” Steckling concentrated on divining the optimal mix and design of electronics and speakers for the room. The final equipment list includes 20 of his patented speakers, each of which are enclosed in handmade mahogany cabinets that match the decor of the room and boost the performance of the horn speakers. The theater’s screen is a 12-by-7-foot Stewart Filmscreen MicroPerf that allows sounds to broadcast through the picture, just as a commercial theater screen does.

As an added feature, Steckling installed extra speakers behind the screen so that sound is projected from the edge of the picture whether the screen is showing a 16:9 aspect widescreen film, a 4:3 aspect black-and-white movie, or a TV program. The picture itself is produced by a high-resolution, three-chip digital processing projector from Runco housed in a sound-proof, cooled enclosure.

Steckling wanted to be able to adapt the theater for changes in sound formats, which might involve more than the five channels now commonly used. To that end, he replaced much of the electronic gear that shapes sound—such as crossovers, which send high frequencies to the tweeters and bass to the woofers—with a computer sound processor from Media Matrix. The sound processor replaces transistors with software to create virtual components—such as computer-generated crossovers—that can be adjusted from a keyboard.

For Morelli, the assignment was to design a room that rivaled the sound quality of a studio but remained consistent with the appearance of the rest of the house. “The owners wanted to have an old-world, Spanish style flowing through the house. They wanted everything handmade, beautifully finished as though it could have been made 100 years ago,” he says.

In the acoustics crash course he received from his partners, Morelli learned from Lipnick that the world’s best-sounding concert hall is Grosse Musikverein in Vienna. Having played there, Lipnick thought the hall benefited from intricate carvings that diffused the sound. Morelli applied this principle to the home theater, incorporating large, elaborately carved mahogany columns to smooth out the bass. Smaller, rounded carvings on the walls and ceiling reduce harsh reflections from high-pitched sound. Between each of the carved columns and each of the ceiling beams is an acoustic fabric that conceals the speakers but does not affect the sound. Instead of the usual theater-style seats, Morelli installed couches. “The most comfortable way to watch a movie, as we all know, is on the couch with your feet up on an ottoman,” he explains. The final tweaking of the electronic panels was reserved until the last ottoman was in place. “Lipnick’s rule was that we would not tune the room until every last piece of cloth, wood, and furniture was in there.”

After two and a half years of planning and construction, the team made some final adjustments to the electronic panels and invited the homeowner to join them on the couches and watch two films known for their soundtracks: The Fifth Element and Men in Black. Watching the aliens cavort onscreen, Lipnick was finally able to breathe a sigh of relief. As he had promised, the sound was out of this world.