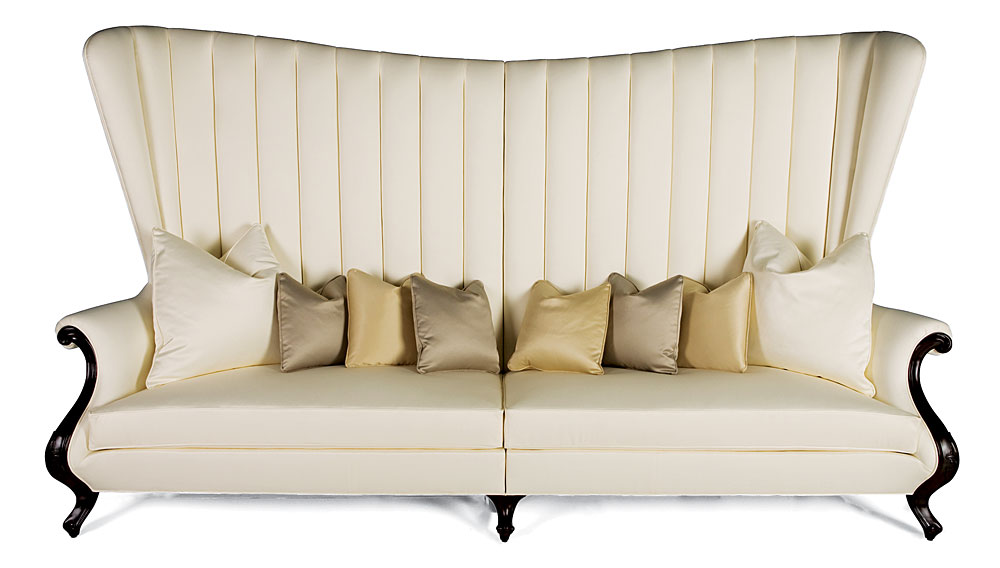 Christopher Guy calls Singapore home; his furniture creations, however, seem to exist in a fantasy world. “I designed an Alice in Wonderland–inspired chair a couple of years ago and really didn’t think there would be much interest in it, but it turned out to be one of my best-selling pieces,” says the 50-year-old British-born designer. That imaginative chair recently served as inspiration for his newest furnishings collection, a 70-piece line bearing flourishes one might expect to find in a fairy tale. Each of the pieces in the series, which debuted last fall, has a storybook-like quality, whether it is a svelte chair with a regally high back or a white lacquer cocktail table with fanciful baroque carvings on its legs and base.

Those well versed in Guy’s work trace his whimsical tendencies back to a time years before his eponymous, Singapore-based company’s 2006 founding, when he was creating decorative mirrors under the brand Harrison & Gil. Many of the mirrors were influenced by the heavily embellished Beaux Arts and baroque buildings of southern France, where as a teenager Guy built houses with his stepfather, a hotelier and part-time contractor with a passion for design and construction.

When Guy turned his attention to furniture, he invented the Chris-X chair featuring the crisscross back legs that have become his trademark. He has since reimagined those sinuous legs for everything from club chairs to chaise longues and, most recently, for a set of $2,827 hand-carved mahogany nesting tables in his latest collection. He designed legs of a different kind for the new line’s $7,995 bar cabinet: Four spindly looking supports grace the refined mahogany piece, which is hand-gouged with indentations that are then glazed with glue, filled with granules of sand, and covered in gold leaf, creating a marbleized effect. Other recent standouts include a 10-foot-long satin sofa with a high scoop back and lacquered mahogany arms and legs.

In addition to introducing the nearly six dozen pieces to his portfolio of more than 3,000 designs—all of which are customizable in various sizes, finishes, and fabrics—the prolific designer opened a new showroom in Chicago in October and, also in the fall, introduced a series of beds with elaborate headboards. One of the headboards was inspired by the sea coral surrounding the Indonesian island of Java, where Guy’s factory employs more than 1,400 carvers and craftspeople. Carved from mahogany and either swathed in gold leaf or treated in a finish of the client’s choice, the headboard (starting at $7,712) rests on a shapely mahogany base (sold separately for $6,292) with gently turned legs—the kind of details, Guy might agree, that dreams are made of.