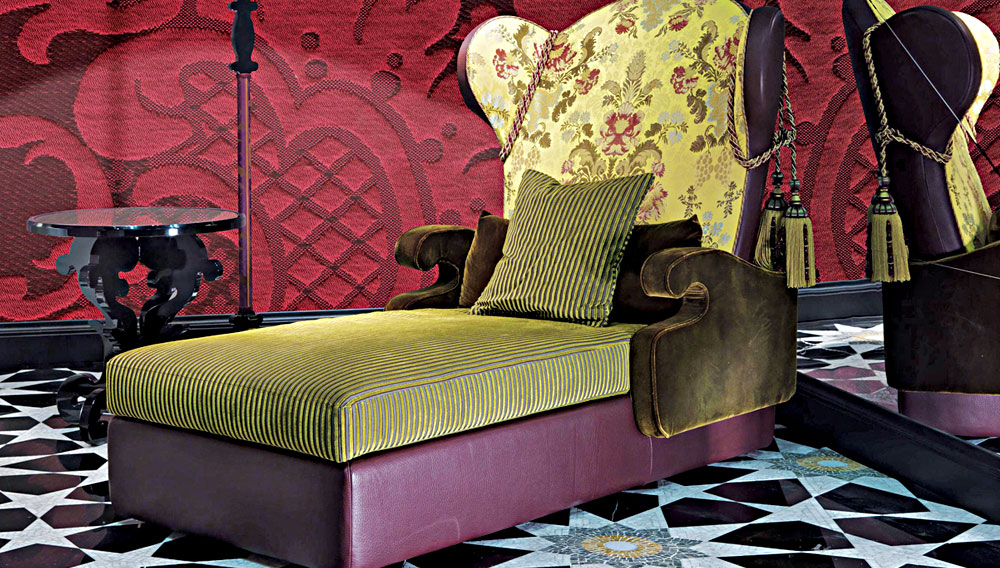 Convention has never defined the work of Christian Lacroix. Before his famed fashion house fell into bankruptcy in 2009, the couturier paraded everything from 18th-century-inspired courtesan dresses and Romanian gypsy costumes to Spanish toreador boleros down the Paris runways. So it is fitting that when the quirky and irrepressible French designer decided to try his hand at furniture, he chose a most unlikely partner in Sicis—a Ravenna, Italy–based manufacturer of decorative glass tiles and elaborate mosaics. “What appealed to me about working with Sicis,” says Lacroix, “is the way in which we can create a trompe l’oeil effect simply by using teeny-tiny stone and glass splinters.”

These colorful micromosaic tiles—fragments no larger than a pinhead—form a cameo-like portrait of Theodora, the 6th-century Byzantine empress, in Lacroix’s Theodora wing armchair, part of a 21-piece collection that includes tables, lamps, and serpentine-shaped sofas. “The mosaic is kept to a minimum,” the designer says. “Otherwise it would look too heavy-handed.”

Like his once meticulously made clothing, Lacroix’s furnishings—slated to arrive in Sicis’ U.S. showrooms in October—achieve a kind of sensory overload that comes from his use of mismatched fabrics (silk, leather, brocade, lace, and velvet), vibrant colors, and styles from different decades, if not centuries. The designer has no qualms about putting curvy Byzantine-influenced arms on an oversize classic American wing chair, or pairing a Victorian-style hourglass-backed side chair with a modern and boxy upholstered cocktail table. Most of the pieces are outfitted with bows, tassels, nailheads, embroideries, and other showy details that create the kind of decorative anarchy at which Lacroix has long excelled.

The furniture is theatrical, but also functional and well made, according to Lacroix. The entire collection is crafted by hand at Sicis Next Art, the company’s new furniture-manufacturing division, and incorporates such time-honored details as hand-tied springs on upholstery and mortise-and-tenon joinery on woodwork. Priced from $1,950 to $22,800, the pieces also are designed in mosaic, so to speak: Each fits puzzle-like into another, making it possible, for example, to create a sofa or lounge simply by combining chairs or adding an ottoman.