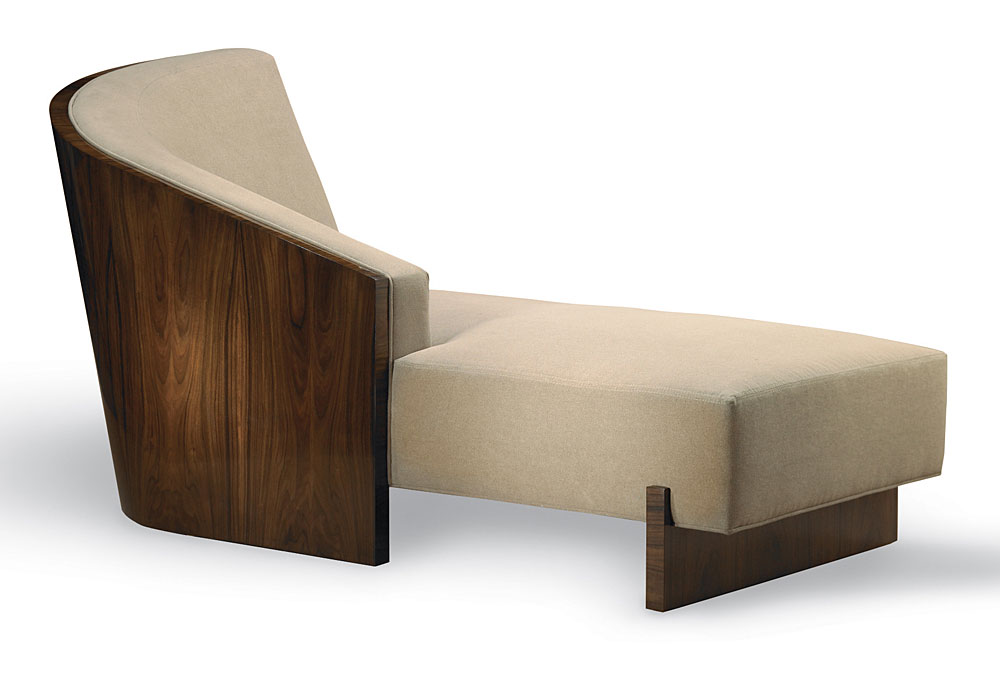 The latest furniture line from Studio Workshops, the San Francisco- and Los Angeles–based sister company of antiques dealer Therien & Co., is intended to evoke New York’s golden age of hotels, when, early in the last century, high society frequented a flurry of new, posh establishments boasting the luxuries (electric lights and air-conditioning among them) of that time. The Manhattan collection comprises two sofas and three chairs named after grand New York hotels that, Studio Workshops’ founding partner Bob Garcia says, “hark back to a certain 1920s sensibility, a time when most of these hotels were built.”

Indeed, the Plaza sofa, St. Regis chair, and Pierre chaise, all with rosewood veneers and hand-rubbed lacquer finishes, display traits of the Deco and Moderne styles that prevailed during that era. However, the Waldorf chair and ottoman and the Essex sofa are more reminiscent of designs from the 1960s.

The pieces are not replicas or even partial reproductions; the designs only hint at those of yesteryear, making them suitable for use in a range of environments, including modern ones. This represents a recent shift in the company’s focus.

Therien established Studio Workshops more than 20 years ago to craft reproductions of classic designs. At that time, Garcia says, Studio Workshops’ pieces “had a very traditional bent inspired mostly by European 18th-century furniture.” But the firm’s emphasis began to change five years ago, he says, when it became impossible to ignore “the monumental taste shift toward modern design.” That shift, he notes, “could be seen in the auction market for 20th-century classics and in the emergence of a new clientele in their 30s and 40s who have a different lifestyle than what antiques satisfy. They are very focused on contemporary design.”

Thus, the Manhattan collection falls squarely under the modern rubric. The pieces have clean, minimalist lines, the execution of which, Garcia says, requires more exacting construction processes than those necessitated by traditional designs because “the details have to be so precise.” The company does not use welts to camouflage unsightly seams, relying instead on exacting joining techniques. “There’s no room for error, especially where the fabric meets the wood,” he says, adding that the greatest challenge lies in “the joining of metal and upholstery, and [ensuring] the flawlessness of the chromium. There are so many trades involved.” The company employs some 40 craftsmen and partners with other firms for metal and veneer work.

Each Manhattan design is handmade and can be customized. You can substitute wenge wood for Macassar ebony, for instance, or request a darker finish. Base prices range from $5,800 for the Waldorf chair (sans ottoman) to $16,350 for the Plaza sofa, but that pricing does not include the cost of fabric. You must supply the fabric for any piece that you order, although Studio Workshops can assist in that undertaking, according to Garcia. In a sense, he says, “it’s like having a set of clothes made.” Or maybe it’s like having a bespoke, modern piece of the golden age.