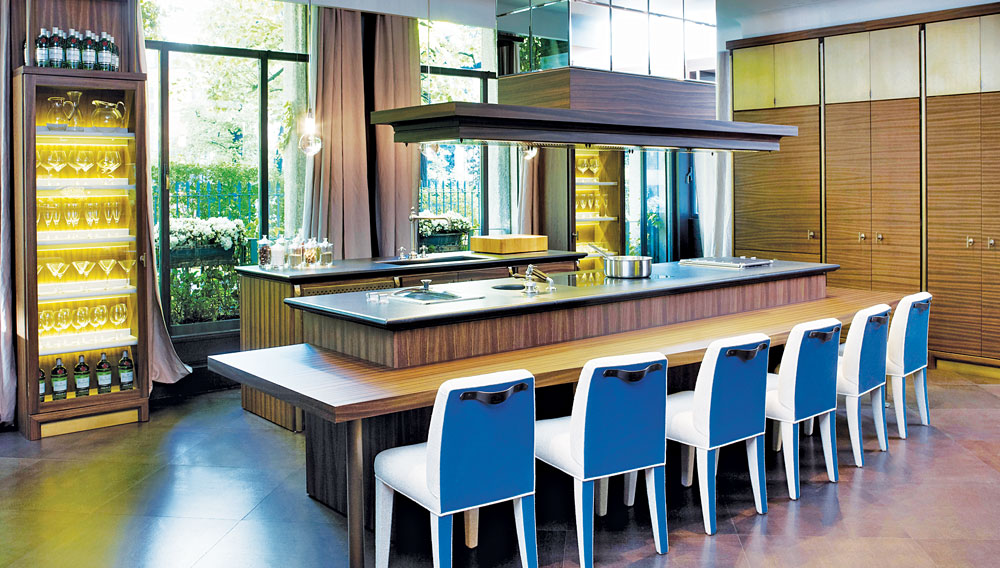 Romeo Sozzi, the patriarch of the family-owned furniture and cabinetry company Promemoria, sees a duality in his designs. “My furniture is masculine in form,” says the 64-year-old Sozzi, who serves as the firm’s lead designer, “but feminine in touch.”

That feminine touch is evident in Angelina, a new division of bespoke kitchens that debuted at the Lecco, Italy–based company’s Milan showroom earlier this year. Promemoria has built a number of custom kitchens for its clients over the years, but the launch of a kitchen line—which is named after Sozzi’s mother—is a first for the company.

This is not the only time Sozzi has taken the firm, and the family, in a new direction. His grandfather (also named Romeo) ran an atelier in the 19th century that repaired and restored carriages for the Italian aristocracy. But Promemoria as it exists today is Sozzi’s brainchild. In the 1980s, he channeled the atelier’s capabilities—its dexterity with materials and its skill at carpentry and veneer work, all of which generations of the Sozzi family had applied to the restoration of antiques since the carriage business succumbed to the advent of the motor car—into the making of modern furniture and cabinetry. Promemoria’s projects today are collaborations between Sozzi and his sons: Davide, Paolo, and Stefano.

For their Angelina kitchens, the Sozzis channeled the spirit of their mother and grandmother. “In Italian culture, the kitchen is the reign of la mama,” says Davide, the company’s director of architecture. The thoughtfulness lavished on every element and detail of Angelina kitchens leaves no doubt that their namesake was deeply revered among the Sozzi men.

Every drawer in an Angelina kitchen is lined with a hand-stitched leather pad. Even purely functional interior hinges, all engineered by Promemoria, are composed of bronze or nickel, bear a matte or polished finish, and carry the company’s logo. Options for the kitchens include wine racks with bottle holders swathed in felt or leather; bronze toe kicks; marble shelving; wood shelving covered in hand-stitched leathers or velvet, and backlit with LED technology; and custom handles of bronze, wood, or Murano glass. “Clients can decide everything, down to the type and color of the stitching,” says Davide.

Like other furniture makers, Promemoria offers hardwood veneers, such as zebrawood, ebony, and oak. Unlike some, it uses double cross-matched veneers, mainly for stability, but also because a scratch would only reveal more of the same wood underneath, instead of a more noticeable substrate. Often, Pro­me­moria scores its veneers with special tools, rubs them with precious metal leaf, and sands and oils them. The Angelina kitchen in Pro­memoria’s Milan showroom features zebrawood cabinet doors covered in thin sheets of bronze, a combination that on the surface resembles a shimmering raw silk.

Angelina kitchens generally cost between $100,000 and $300,000 (sans appliances, which clients purchase and Promemoria builds around), though a Miami kitchen installed this year is said to have cost $400,000. “Each kitchen is an entirely new project,” says Davide. “Every time, we start from the beginning.”

Promemoria has two U.S. showrooms, in New York City and Dallas, where potential clients can inquire about and purchase an Angelina kitchen. The line is also available through other U.S. establishments, such as Holly Hunt in Los Angeles and Miami. But for now, seeing Promemoria’s mother of the kitchen firsthand requires a trip to the company’s showrooms in Milan, London, or Shanghai.