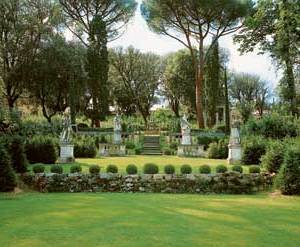 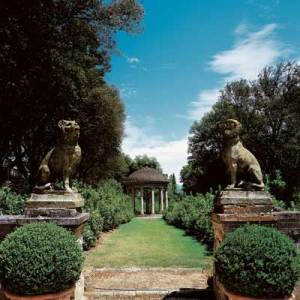 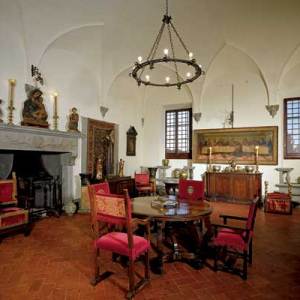 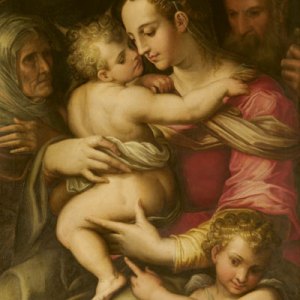 The people who designed the main entrance to La Pietra, a villa in Florence, Italy, obviously knew a thing or two about drama. Twin rows of cypress trees line the quarter-mile-long straight sliver of road that leads from the gate to the facade, creating the impression that the house, painted a radiant yellow, is peering out from behind a pair of velvety green curtains. While traversing the road, if you look to the right, through the trees you will see a landscape that typifies Tuscany: rolling hills planted with hundreds of olive trees and villages fading into the hazy blue distance. By the time you arrive at the front door, La Pietra is ready to greet you in all its green-shuttered glory.

This magnificent cypress-lined approach to the villa so closely resembles the postcard image of Tuscany that it comes as a surprise to learn that the landscaping is recent relative to the olive trees on the hillsides. The cypress trees were planted in the mid- to late-19th century, says Nicholas Dakin-Elliot, head gardener at La Pietra. He provides further insight (or perhaps disillusionment) when he notes that cypress trees are not native to this region or even to this country, that the Etruscans originally brought them to Italy from the eastern Mediterranean for use as timber. Like the cypresses, La Pietra itself is not as quintessentially Tuscan as it seems. The aesthetics that informed its interior decor and the design of the gardens on its grounds belonged to foreigners, American Hortense Acton and her British husband, Arthur.

Their son, Sir Harold Acton, to ensure that his family estate remained intact and preserved after his death, bequeathed it, plus a considerable sum of money, to New York University when he died in 1994. La Pietra, which means “the stone” in Italian, was built during the 1460s for Francesco Sassetti, general manager of the Medici bank, but the Acton family, through their connoisseurship, transformed it into the unique treasure that it is today. NYU’s restorative efforts are intended to preserve the villa and its grounds in their 20th-century configuration, down to the patches of corn and brussels sprouts that the Actons planted in the vegetable garden.

Hortense, a wealthy heiress, and Arthur, who purchased art in Europe for the American clients of architect Stanford White, rented La Pietra for several years before acquiring it in 1907. At the time, the property included more than 40 acres; they later purchased adjoining properties (some of which contained other villas), increasing the estate to 57 acres. While residing at La Pietra, the Actons cultivated a sprawling garden and amassed a collection of decorative objects, sculptures, and paintings; the most significant of the latter is Giorgio Vasari’s Holy Family, which is considered the artist’s masterpiece.

La Pietra was the birthplace of Harold Acton and his brother, William, who embarked on a promising career as an artist but died in Imola, in Italy’s Emilia Romagna region, under mysterious circumstances in the waning days of World War II. After Hortense passed away in 1962 (Arthur had died nine years earlier), Harold assumed stewardship of the villa and grounds and made aesthetic contributions of his own.

He maintained the estate despite his belief that he was not the favorite son, and even though, as evidence suggests, La Pietra probably was not his favorite place, at least not at first. Harold spent his happiest years in the 1930s in China, where he taught at Peking University and translated dramas and poetry, before Japan’s 1937 invasion of China forced him to flee the country and leave behind a priceless collection of antiques that he would never see again. Harold nonetheless dutifully accepted the role of lord of the manor after his mother’s death and carried on the family tradition of hospitality, hosting notables such as Princess Margaret of England and author Evelyn Waugh, who met Harold during their college days at Oxford and who modeled the Anthony Blanche character in Brideshead Revisited after him. Sir Harold, who was granted a knighthood in 1974, also established himself as a scholar, writing a book about the Medici, befriending prominent art historian and fellow Tuscany resident Bernard Berenson, and composing two volumes of memoirs.

When he died, Sir Harold left NYU a spectacular gift, as well as a daunting challenge: La Pietra and its gardens required extensive restoration; the villa’s holdings of art, antiques, and furniture—then estimated at roughly 5,000 items—needed to be cataloged; and the other villas on the property had to be reconfigured and renovated for use in an undergraduate study-abroad program for which NYU would employ La Pietra as the base. Further complications arose when the heirs of a woman who claimed to be Arthur’s illegitimate daughter sued for a share of the estate, which has an estimated value of $500 million to $1 billion. (The matter is proceeding through the Italian court system.)

Renovating La Pietra proved complicated. In addition to rectifying physical defects in the more than 500-year-old building—including a leaky roof and an unstable foundation—NYU had to install modern climate-control systems to better preserve the paintings and other works of art displayed within. The school also had to ensure that any construction work would comply with Italian laws governing architectural treasures. “In other words, we had to put it back exactly the way we found it,” says David Finney, an NYU official who oversaw the work that took place from 1996 through 2003. “In an odd way, it’s completely different, but utterly the same.”

The sameness extends to the interior, where the artworks and furnishings largely have been left as they were arranged when Sir Harold died, with one notable exception: Vasari’s Holy Family has been moved from a second-story bedroom to the first-floor dining room, where it can be viewed by a greater number of visitors. (Few are permitted to explore the home’s upper levels.)

Maintaining La Pietra in the form that the Actons gave it preserves a period in Florence’s history that spanned the mid-19th to early 20th centuries, when so many British expatriates took residence that the local Italian word for foreigner was inglese. Poets Robert Browning and Elizabeth Barrett Browning were perhaps the most celebrated members of this exodus, but they were two among thousands. Dakin-Elliot refers to a 1910 survey that counted 60,000 British expatriates living in Florence, which, he says, would have represented as much as half the city’s population at the time. A less reliable 1890 statistic places the number of expat Brits at 100,000, and neither figure accounts for the sizable American population then living in Florence. Art was the main attraction for the Brits, but, Dakin-Elliot says, they were also lured by a lower cost of living and greater freedom to do as they pleased. “You could get away with more here than you could at home,” he says. “In Britain, sodomy was explicitly illegal until 1860. In Florence, it was explicitly legal.”

Regardless of their motivations for coming to Florence, the British certainly indulged their well-known love of gardens. Arthur Acton, who took the lead in designing the gardens at La Pietra, was no exception, but he was more sensible than most in planning his patch of paradise. Instead of filling it with vibrantly colored flowering plants, most of which prove difficult to maintain in the northern Italian climate, he opted for a Renaissance revival garden, which draws its strength and beauty from varying shades of green. Dakin-Elliot is supervising a comprehensive revival, if you will, of the Renaissance revival garden, using as a blueprint a collection of photographs taken in its peak year of 1938 by someone who, in his words, “went mad with a camera.”

The project will continue for several more years, but Dakin-Elliot’s effort already has begun to bear fruit. An area dubbed the Teatrino, where the Actons were often entertained by amateur actors and singers, hosted a performance by the Royal Shakespeare Company last June. An audience of 200 watched Dame Judi Dench and others dramatize Venus and Adonis, an erotic poem by Shakespeare, another Briton who was enchanted by the romance and beauty of northern Italy. Only one of Shakespeare’s plays contains scenes that are set in Florence, but no doubt the faculty of the NYU drama department is waiting for the right moment to schedule a performance of that play in the Teatrino of the unfinished garden. It is the comedy titled All’s Well That Ends Well.

The Vasari Corridor is the medieval version of a limousine with tinted windows. Designed by artist Giorgio Vasari for Grand Duke Cosimo de’ Medici and built in 1565, the enclosed walkway begins inconspicuously behind a door in what is now the Uffizi museum and ends in the Boboli Gardens, crossing above the Ponte Vecchio on the way. Throughout its half-mile length, the corridor is lined with the Uffizi’s collection of artists’ self-portraits, the largest in the world. The walls contain barred portholes that permitted the duke, while crossing the Ponte Vecchio, to remain unseen while he peered at the people outside, a luxury enjoyed today by limo passengers.

Because the corridor has only one entrance and one exit, it does not meet modern fire code standards, and so Uffizi officials are disinclined to open it to the public. However, the organizers of New York University’s WorldClass Program, which offers weeklong educational trips—featuring lectures and tours by NYU professors—to Florence and other European destinations, arranged for the participants in last fall’s program to walk down the Vasari Corridor after a visit to the Uffizi.

La Pietra is central to the Florence itinerary, but the NYU staff places the property in context with exclusive visits to other villas, such as I Tatti, which art historian Bernard Berenson bequeathed to Harvard University.

Excursions to view Michelangelo’s David and other must-see attractions are included, as are lunches at wineries and dinners at leading restaurants. Unlike an undergraduate semester-abroad program, a WorldClass trip recalls only the most enjoyable aspects of college-level learning: No tests or term papers are required. The Florence itinerary, which, like all WorldClass trips, is limited to 20 participants, will be offered twice this year, from May 14 to 22 and September 25 to October 2.