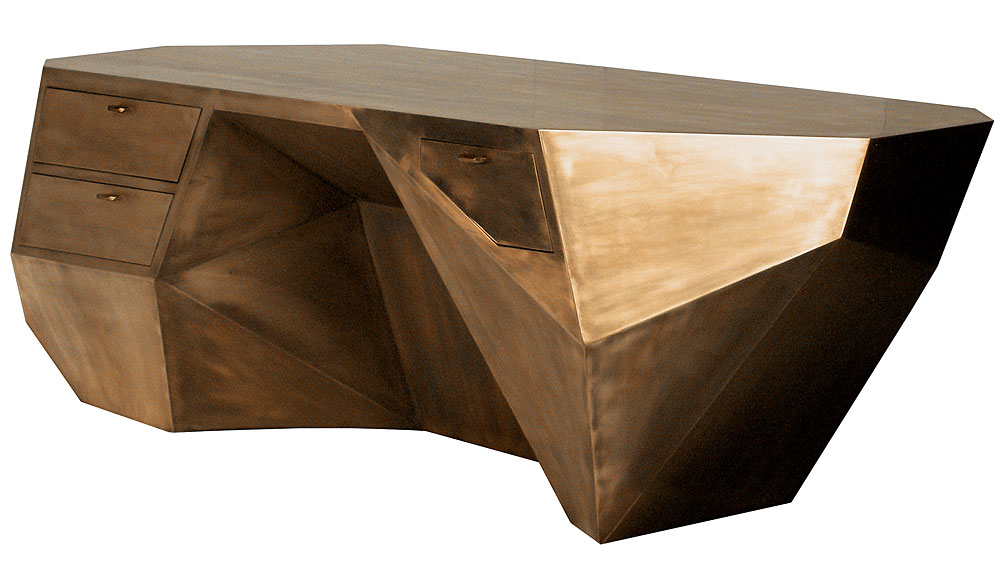 Familiar objects and fundamental forms are the stuff of inspiration for furniture maker Sylvan Fiss. Take the simple metal bolt that caught the 54-year-old designer’s eye last spring. To anyone else, it is simply a rod for fastening items together, but Fiss saw it as a work of art that became the impetus for his recently introduced Boulon mirror. Similarly, while watching a show on gemstones on the Discovery Channel, Fiss became so entranced by the geometric makeup of a microscopic crystalline structure that, a short time later, he created his meteorlike Popova writing desk in its image.

“They are both massive and almost brutal in their beauty,” says Fiss of the mirror and desk, just two of the pieces in his SylvanSF collection of one-off and limited-edition furnishings. “Everyday objects, like the bolt, all have a specific function that we really don’t pay much mind,” he says. “But I like taking those basic forms and making them sexy and beautiful.”

Such objects first captivated Fiss in the early 1980s, during an apprenticeship with California interior decorator Pepe Matthieu. Fiss admired the way that Matthieu filled his client’s homes with eclectic pieces from a mix of Regency, neoclassic, and Hollywood Gothic styles—an approach that, according to Fiss, did not follow any established design rules yet always worked. Additionally, Fiss says that he learned from Matthieu how to use found objects not necessarily associated with the design world to create things from his own imagination. The experience ultimately compelled Fiss to start his own company, with the help of friend Jaime Sanchez, in 2002.

Today, Fiss divides his time between his San Francisco atelier and his production facility on the Indonesian island of Java. He creates complex pieces from materials that include by-product bone, exotic hides, and parchment veneers. The bolt-shaped frame of the designer’s Boulon mirror is handcarved from mahogany and wrapped in parchment. His Popova desk and an updated version of a classic Klismos chair have been wrapped and cast, respectively, in pure brass. Involved processes such as these mean that a single piece can take anywhere from three to eight months to complete.

Given the considerable work that goes into each design, Fiss adds fewer than 40 pieces, priced from $2,500 to $25,000, to his company’s offerings each year. And unlike furniture designers who debut new items as part of seasonal collections, Fiss takes an uncommon, more spontaneous approach to product introductions. “Getting caught in the rhythms of seasonal releases is a clear route to killing creativity,” he says. “There is fantasy with all of my pieces.”