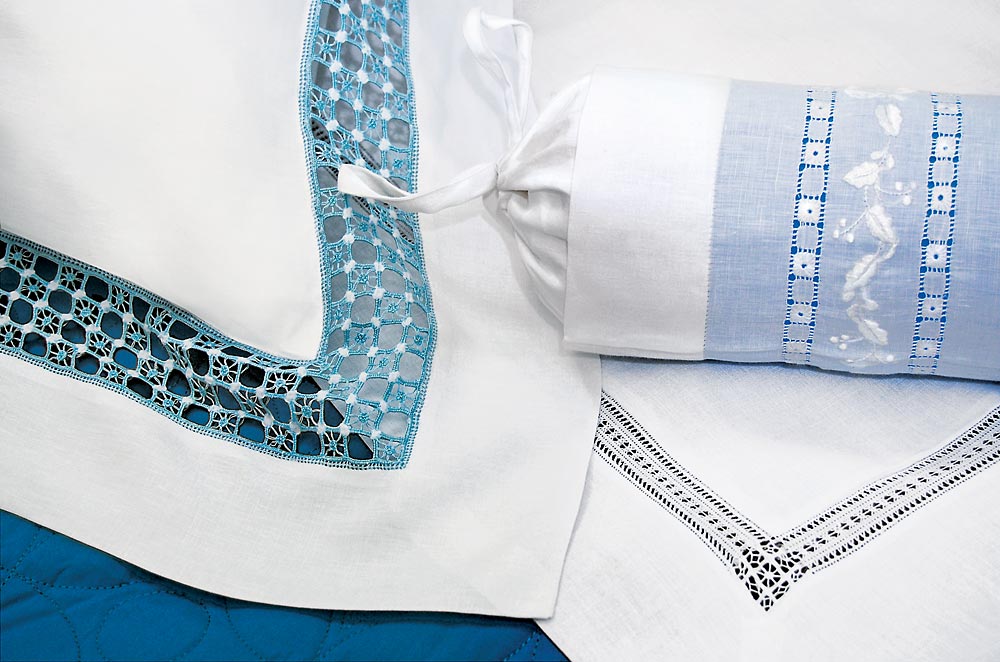 Casa del Bianco does its best work in the bedroom. So when the Italian linens company opened a by-appointment-only studio in New York in April 2007, Fabrizio and Lupe Biasiolo—the two of the company’s four owners who run its U.S. division—decided that the best way to present their bespoke services was in an oversize apartment reimagined as an Upper East Side boudoir.

“It’s like walking into a lovely one-bedroom apartment with a large living room, only instead of sofas, we have beds,” says Fabrizio, who spent 10 years at Frette, the last four as a vice president. There he met Lupe—now his wife—who managed the Houston and New York branches for nearly 17 years. They left the company in 1999 and opened the flagship Casa Del Bianco store at 65th and Lexington about a year later. Because some of their clients found the busy pace of that shop distracting, the Biasiolos also opened Casa Del Bianco Studio to offer privacy and more personal service.

The company offers several hundred color options, as well as the ability to custom-dye and custom-size any bed set or duvet cover. “At Frette we found if you offer people six colors, they will always want a seventh. No matter how much you offer, there are some people who will always look for something you don’t have,” Fabrizio says.

However, when the sky is the limit, sorting through the options is not always easy. There are a number of important matters to consider, including fabric varieties (cotton sateen, percale, linen, silk, satin), thread count (100 to 1,000 and above), and weight (a 500-thread-count percale weighs approximately 3.1 ounces per square yard, while a 1,000-?thread-count sateen weighs 5.3 ounces per square yard). “There is a common misconception that the higher the thread count, the finer the quality,” Fabrizio says. “But in reality, the more threads you put in a square inch, the more the fabric weighs, which isn’t necessarily better.”

Casa Del Bianco offers three levels of technique—fully machine-embroidered, hand-guided machine-embroidered, and totally hand-embroidered—depending on the customer’s budget and the complexity of the design. A commission for a king set, which includes top and bottom sheets and a pair of pillowcases, can range anywhere from $700 to $3,800. At higher price points, Casa Del Bianco welcomes more elaborate projects as well. For example, a recent bedding set featured a complex asymmetrical cubist design that entailed the entire sheet set and matching duvet cover being embroidered by hand. Other commissions have included a white percale sheet set with an allover pattern of four zigzagging, embroidered navy waves, and an ivory linen sheet set embroidered with tiny pumpkin-colored crosses.

Casa Del Bianco produces all of its sheets in a textile mill in Cernusco, Italy, that also supplies Frette. According to Fabrizio, the machine embroidery is done at a facility near the company’s main factory in Milan, and nuns in Venice and Tuscany do the hand-embroidery. “One of the delivery factors is the age of the nun,” he says, noting that most machine orders can be ready within four weeks, while handwork can take as long as three months. “The older nuns are faster and produce more,” he says. “Unfortunately, that’s the one thing we don’t have any control over.”