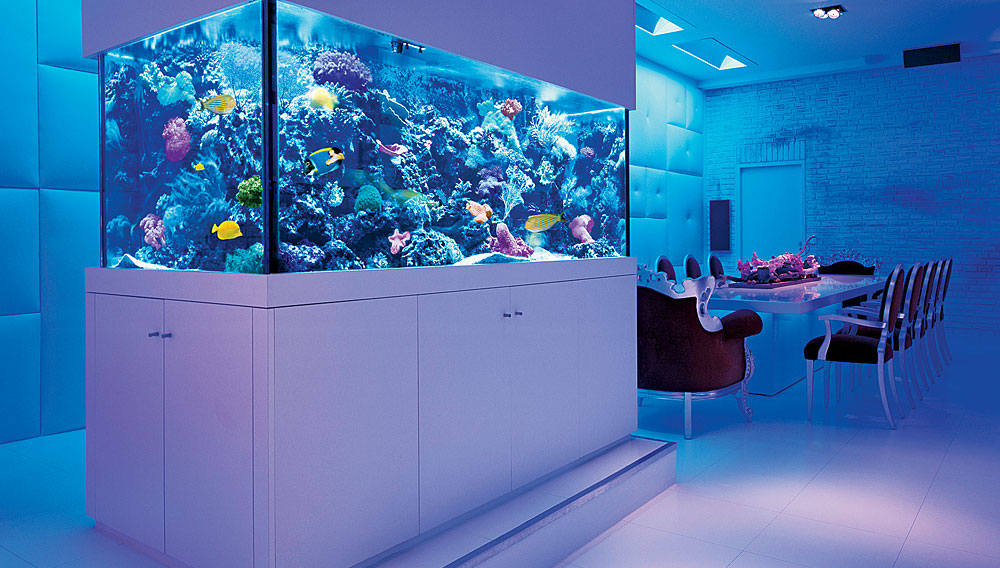 Aquarium designer Martin Schapira’s love affair with marine life began in the third grade. “My father came home with a 10-gallon fish tank one day, and I was immediately captivated,” he recalls. It was Schapira’s first aquarium, and although it contained just two small turtles and a goldfish, it fostered a fascination that bordered on obsession. “I went to every pet store in New York and bought every type of plant and rock I could find in order to maintain it,” he says. “I’ve been hooked ever since.”

Now 28, Schapira creates some of the world’s largest and most complex aquatic landscapes through Okeanos Aquascaping, the New York–based aquarium and pond design firm that he cofounded with Noam Kamelhar in 2002. Schapira’s approach relies on a think-outside-the-box mentality: He and Kamelhar reject traditional stand-alone tanks in favor of sleek, modern-looking aquariums (priced from $12,000 to upwards of $150,000) that they build into the walls or other paneling in their clients’ homes. “It’s not easy to make 500 gallons appear light and elegant,” says Schapira. “Most people think you can just stick an aquarium in the middle of a room and people will be wowed, but the design side is as much a factor as the aquatic side.”

Every Okeanos project is custom. At each client’s behest, the company combines such cutting-edge materials as Starphire—a low-iron glass that minimizes reflection and green tint—with interior-design elements like shagreen stingray leather, macassar ebony, or zebrawood to decorate the tank’s exterior, and recessed lights, set in the top or bottom of the receptacle, to mimic sunlight. The lighting equipment is concealed, as is the filtration system. To accomplish this, the company produces all parts—filters, tubes, drains, and so forth—by hand, with each project’s particular requirements in mind. The result is a seamless scene submerged in many gallons of water and rife with dozens of types of fish and coral.

“It’s like a living painting,” says one client, whose 300-gallon coral-reef aquarium displays rare Kupang Island live rock and a rainbow of clown fish, wrasses, and anthias from Indonesia, Vanuatu, and Fiji, respectively. Okeanos spent nearly four months building the 10-by-32-foot aquarium, which is built into, and flush with, the walnut paneling in the den of the client’s New York City home. “We didn’t want it sticking out into the room,” says the client. “It’s part of the wall, almost like a window into another world.”

To add yet another dimension to their company’s offerings, Schapira and Kamelhar recently announced a travel option that will immerse their customers in some of the planet’s most densely populated underwater ecosystems. Beginning this summer, Okeanos will offer vacation packages to 10 exotic locales, among them Australia’s Great Barrier Reef. Guided scuba diving and snorkeling tours will enable clients to identify firsthand the various species they would like to see in their tanks. The trips, priced from $75,000, will include round-trip airfare, accommodations in a five-star resort, and the construction and filling of an aquarium.

These sojourns may also afford the opportunity to experience the kind of childlike wonder that Schapira felt when he received his first fish tank. “Exploring that world is one of the most beautiful experiences you can ever have,” he says. “And to replicate it at home is the greatest souvenir imaginable.”