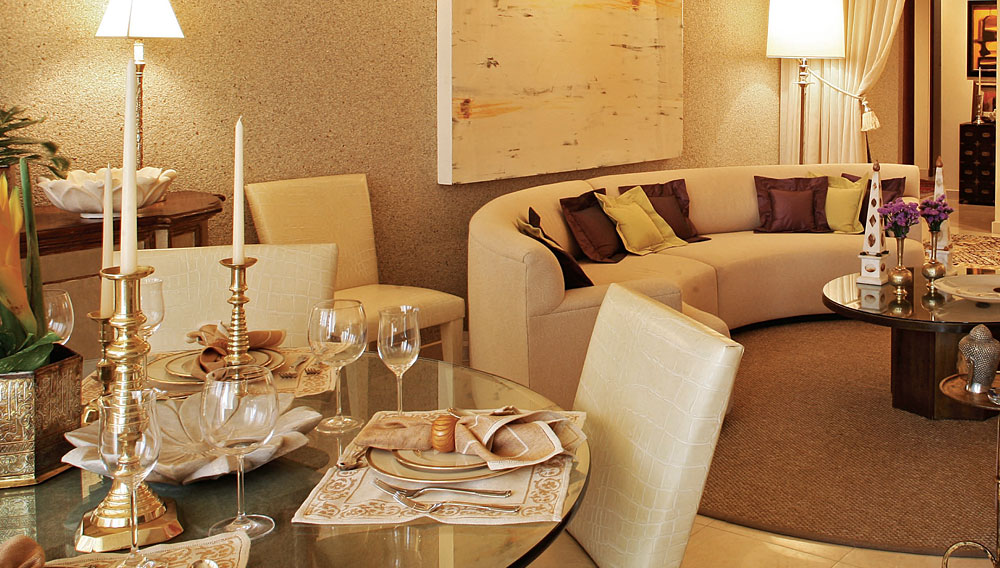 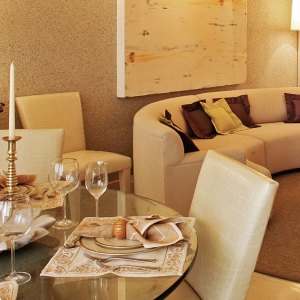 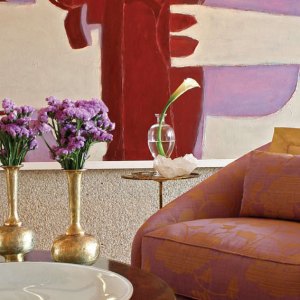 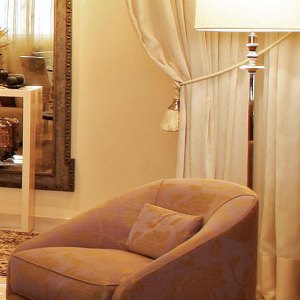 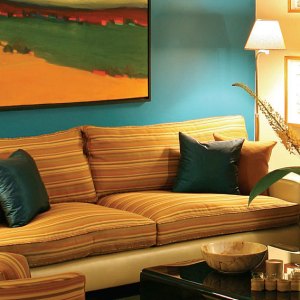 When New York–based interior designer Andrew Suvalsky walked into the newly constructed high-rise apartment of his friend, a 52-year-old bachelor who owns a large commercial real estate company in Puerto Rico, he knew there were certain aspects of the architecture that he wanted to alter right away. The home, a 2,200-square-foot pied-à-terre located in Guaynabo, a suburb just south of San Juan, had an overwhelming sense of rectilinearity. The combined living and dining room, in particular, was a 40-foot-long, 18-foot-wide space with a balcony at the shorter end. “Once I saw that, I knew I wanted to avoid using any rectangle-shaped furniture,” Suvalsky says, pointing out the current room’s custom-designed semicircular sofas and barrel-back chairs that encircle a round coffee table atop a circular rug, and a round mirror and dining table at the far end. “The design really de-emphasizes the room’s rigidity and creates better energy and a more graceful traffic pattern. You have to meander around the furniture.”

Suvalsky met the homeowner while working for another firm that designed the real estate entrepreneur’s New York apartment 10 years earlier. “I cut my teeth on that apartment, and a friendship developed,” says Suvalsky, who gave that residence a more urban-chic feel. In 2004 the designer started his own company; shortly after, the homeowner purchased this home in his native Puerto Rico and hired Suvalsky to design it.

“I liked his work,” says the homeowner, “and he knew what I liked. I felt he could guide me.” Initially the apartment was a blank slate: “There weren’t even towels,” Suvalsky recalls. In a demonstration of absolute trust, the homeowner gave the designer carte blanche.

However, the homeowner did request that a few of his interests be threaded throughout the design scheme: a love of New York, a collection of Moroccan furniture and accessories from his travels, and a passion for classic Greek and Roman motifs. The apartment also had to reflect a sense of place. The municipality of Guaynabo has the highest income per capita on the island and is the Caribbean headquarters for various multinational banking, oil, computer, and air-travel firms. Yet its tropical setting exudes a casual, relaxed air.

Although some elements, such as the vintage photograph of Grand Central Station in one bath, directly address the New York component of the design, Suvalsky says the city is “reflected more in the vibe of the apartment, in its lines, its mix of styles, and its sophistication.” In the living/dining room, for instance, glamorous details—silky sheen fabrics, gold-leafed accessories, creamy lacquers, and a Venetian-glass chandelier—are pervasive. But they are also grounded to the locale with rustic textures, such as the agave-fiber area rug and the Phillip Jeffries wallpaper that gives the appearance of finely crushed stone.

Suvalsky references classical antiquity with obelisks on a vintage Philip LaVerne coffee table (its fluted base sporting a Greco-Roman scene) and the inverted column capital that serves as a base for the dining table. On the master bedroom’s nightstands are urn-shaped lamps and a classical bust. Moroccan furnishings—including handcarved chairs and mirrors, Berber rugs, nacre-inlaid tables, and brass accessories—add exoticism to the room’s symmetry and form.

The sense of place is subtly represented by the owner’s collection of contemporary Puerto Rican paintings. Grass-cloth walls in the master bedroom, an agave carpet in the living room, and British Khaki bookshelves with finials in the library add a Caribbean textural context. But this part of the design explodes exuberantly in the media room, where Suvalsky painted one wall an aquamarine shade called Surf Blue by Benjamin Moore. “I wanted that room to be a little more intense,” he explains, “a little more luscious and playful, but not overwhelming.”

And, indeed, in contrast with the almost ethereal refinement of the living room and master bedroom—with their pale hues and mellow gold accents—the media room feels like a ripe tropical fruit. Taken together, the project achieves the aim of all good interior design: to reflect the tastes and interests of the homeowner.