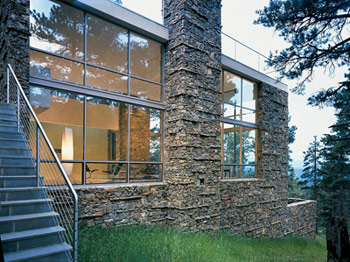 In 1996, when Chris Allen and her husband, Stuart, met architect Alexander Gorlin at New York’s Plaza Hotel, they were hoping to talk him into designing an Italian villa for the four acres they owned in Genesse, Colorado. “We wanted to seduce him in terms of the setting,” she says. So they prepared a video, with a Vivaldi score, that showed the site—an evergreen-stippled mountainside adjacent to an elk preserve about a half hour from downtown Denver.

Gorlin, a Manhattan native with degrees from Cooper Union and the Yale School of Architecture, was intrigued. He had never been to Colorado. He flew west, walked the property, and envisioned not an Italianate structure but what he termed a “ruin in the woods that could be inhabited.” Then he chose the site: a secluded outcrop between two ravines from which no other houses could be seen.

It was the Allens’ turn to be impressed. “Other architects found the first flat spot,” Chris explains. “Alex found the spot that was picture-perfect.” Soon after, she recalls, “We gave him our requirements and just said, ‘Run with it.’ ”

The result is a strikingly modern 10,000-square-foot structure that Gorlin calls “a breakthrough house.” Although it is very much an original, its influences range from the wrapped parallel railings associated with Richard Meier, for whom Gorlin worked before establishing his own firm in 1986, to the Anasazi ruins of New Mexico’s Chaco Canyon, which Gorlin alludes to in the layered stone walls. A recipient of the American Academy’s Rome Prize, Gorlin also reveals an unexpected Italian influence: Dante Alighieri, whose description of the “sacred stairs” of “rough-textured” rock that rise to paradise in Cantos IX through XIII of the Purgatorio inspired the ascending terraces. The poem also influenced the front door, “a sacred portal . . . of massive and resounding metal,” which Gorlin interpreted as a 10-by-12-foot copper and steel plate.

During the design phase, Gorlin “made me appreciate how difficult it was to make something simple,” Chris says. From above, the structure resembles a cross. The couple’s three children are in one wing of the cross; they are in the other; and the kitchen provides the common ground between them. The vertical elements display the same deceptive simplicity. The master bedroom is at the base of a tower; Stuart’s office is at the top, where he sits “like the captain of a ship,” Gorlin says.

Visitors enter the house through either its underground five-car garage or the massive front door. Those who choose the door find themselves in a long hall beneath a 200-foot-long skylight, which, Gorlin says, “invites the changing light in” and fights the “dark, heavy, and lugubrious” feeling that he associates with certain structures by Frank Lloyd Wright. “Light makes space,” Gorlin observes. “Without light, there is no architecture. Whatever you do changes with the light, every day of the year.”

The light also changes within each 24-hour period. “Nighttime out here is as exciting as daytime,” Chris says. “The stars are in your face.” Last fall the family viewed a meteorite shower from the residence’s highest point: a terrace, which is a “roofless” room with an outdoor fireplace, set on the roof of Stuart’s office.

The open-air room reflects another Gorlin goal: to blur the distinction between indoors and out. Floor-to-ceiling glass windows in the living room eliminate the optical barrier with the surrounding woods. Nor does the house have air-conditioning. “In Colorado we don’t have issues with bugs,” Chris explains. “You can leave the doors open.”

Even the walls embody Gorlin’s aim to make the house “part of the landscape, not an imposition on it.” They are made of “moss rocks,” quarried in Wyoming and covered with tiny plants that thrive both within and without. Between its timeworn stonework and sleek contemporary lines, Gorlin sought to make the house “ancient in the sense of permanence, yet modern in the sense of being very open and glassy,” he says. “Modern houses often look like alien spacecraft that have landed. I like the openness of that look, but not the feeling that the house could take off at a moment’s notice.”

The architect’s vision was a puzzle for local craftsmen, many of whom were Russian immigrants who spoke minimal English. The bathrooms, like many areas in the house, have continuous limestone floors. Chris Allen recalls the time that she walked in on a workman who was breaking her beautiful 24-inch squares of limestone into 4-inch shards. He was laying tile “the only way that he had seen showers put together,” she says, still in shock. Gorlin set him straight, and the finished bathroom features two showerheads that emerge from the moss-rock wall and spill water onto an uninterrupted floor.

Although Allen says it is exhilarating to live in the house, she also finds it challenging. For example, “it takes three days to clean the skylight,” she says. “The maintenance of materials can be difficult.” She has learned, however, that not every surface has to sparkle for her to derive pleasure from her surroundings: “I have a dirty skylight when it rains, but I also have a beautiful view.”

The couple chose to live in the house for a while before fully furnishing it. Chris has been slowly filling the cavernous living room with classic modern pieces—Mies van der Rohe’s daybed and Barcelona chair and Noguchi lamps.

Stuart, who is a geologist, chose the object that occupies the illuminated niche in the hall off the entry—a giant hunk of gypsum on calcite from Mexico.

Unlike their previous home, which Chris Allen describes as having more of a cozy Ralph Lauren look, minimalism can be unforgiving. “If you leave one toothbrush out,” she says, “you’ve blown the whole thing.”