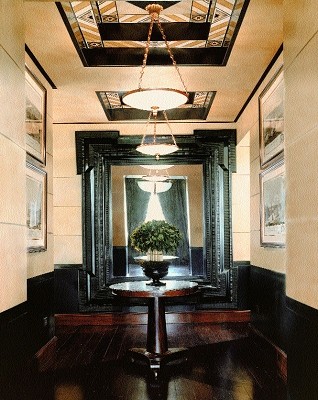 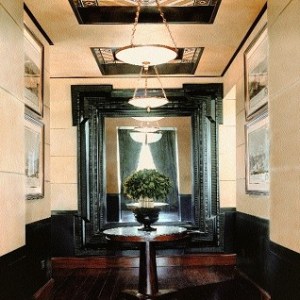 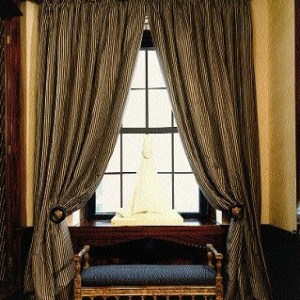 “Strength” is a word that comes up often in conversation with Manhattan interior designer Charles Allem. “I lean toward Empire as a style because of its great strength,” he says, referring to a 3,800-square-foot pied-à-terre that he recently completed on the 27th floor of the Pierre hotel in New York. The attribute fits. Between its dramatic ebony moldings and Cuban mahogany marquetry, the Empire-style residence evokes a fortress in the sky, eased but not weakened by the parchment-colored silk on its walls.

Allem, however, doesn’t apply the term just to his work. His clients, who include NYPD Blue creator Steven Bochco and singer Luther Vandross, are “powerhouses.” And the strength of his personality, as it is expressed in highly individualized interiors, is what keeps them coming back. “They’re not buying a look,” he says. “They’re buying the talent inside me.”

Allem grew up in South Africa in a home that he describes as “privileged and very colonial.” At a young age he learned to appreciate beautiful things, an aptitude his Lebanese parents encouraged by letting him assist English designer David Hicks on the family’s Johannesburg residence. His youth was also impacted by the country’s political instability. When he was 17, his father said, “You need to make a life for yourself abroad,” which he proceeded to do. He left Johannesburg to work in New York as a personal assistant to design legend William McCarty Cooper. By 1994 he had established his own business, and now he has offices in Manhattan and Los Angeles.

That peripatetic path and international eclecticism are shared by the couple who own the apartment. Allem has worked with them often—they also have residences in Sweden and Spain—and he counts them among his friends. In their suite at the Pierre overlooking Central Park, he demonstrates his preference for cohesive design. “I like spaces that flow,” he says, an effect he achieves with color—in this case, a palette of toffee, parchment and caramel that winds throughout the public rooms. “I’m drawn to one color and one type of wood. Not a pink room and a yellow room and a red room.”

Allem also defines his interiors with objects that are few yet extraordinary. “I don’t just spec things from a catalog,” he says. “I go to boutiques and galleries and get inspired. I am my own walking library.” For the apartment, he selected Daum and Gallé vases and Tiffany lamps. To explore balance and symmetry, he paired two-of-a-kind objects: two English Gothic benches with Russian Empire armchairs and Chinese Tang Dynasty porcelain horses with Chinese Export porcelain plates.

The Cardinal, a striking piece by 20th-century Italian sculptor Giacomo Manzù, sits in front of the foyer’s window: Strongly triangular, it depicts a priest in a miter, which Allem has framed with silk drapes. At $750,000, the sculpture may also be the suite’s most expensive component. “The budget was enormous,” Allem says. “You can’t do that level of design without money.”

Despite its Empire look, the space is hardly a frozen collection of antiques. “If people want to live in a time warp, they should live in a museum,” he asserts. A new Tibetan silk carpet, designed by Allem and manufactured by Stark Carpet, cushions the floor. The library, which doubles as a dining room, features a black-and-white Roy Lichtenstein lithograph. Books are never treated as mere decorative accents. The wife, who studied Latin, actually reads the leather-bound volumes in the library.

Even Allem’s approach to plants is original. In the foyer, he decked a central table with a topiary of lotus leaves dried and bound with brown leather. In the library, he filled an ormolu tazza with a cluster of baby eggplants. Despite their intrinsic loveliness, certain plants have become a cliché through overuse. “When all else fails,” he notes dryly, “some designers put an orchid in the room.”

Nor does he have a set formula for working with clients. “I try to find the nucleus of where they’re coming from—what they’re looking for—and hit that area,” he says. Adaptability is key to his designs; his portfolio runs the gamut from a 1960s post-and-beam glass house in Bel-Air, Calif., to a New York apartment done entirely in black and white.

Although Allem welcomes input from clients, he appreciates autonomy. “I can’t stand clients micromanaging,” he says. If they threaten to interfere, he jokes, “I tell them to go do charity work.” He does, however, value his close collaboration with New York’s Lacina Group, the architects who, he insists, make his “vision and dream become reality.”

After 10 years of living exclusively in Manhattan, Allem is buying a house in Los Angeles. He is not deserting New York, he emphasizes, though the events of September 11 were a chilling reminder of the instability that drove him from South Africa. Allem will not surrender his Manhattan apartment, but he is excited by West Coast challenges. “I love the way of life in Los Angeles,” he explains. To work in one zone is to court “being stagnant and stale.”