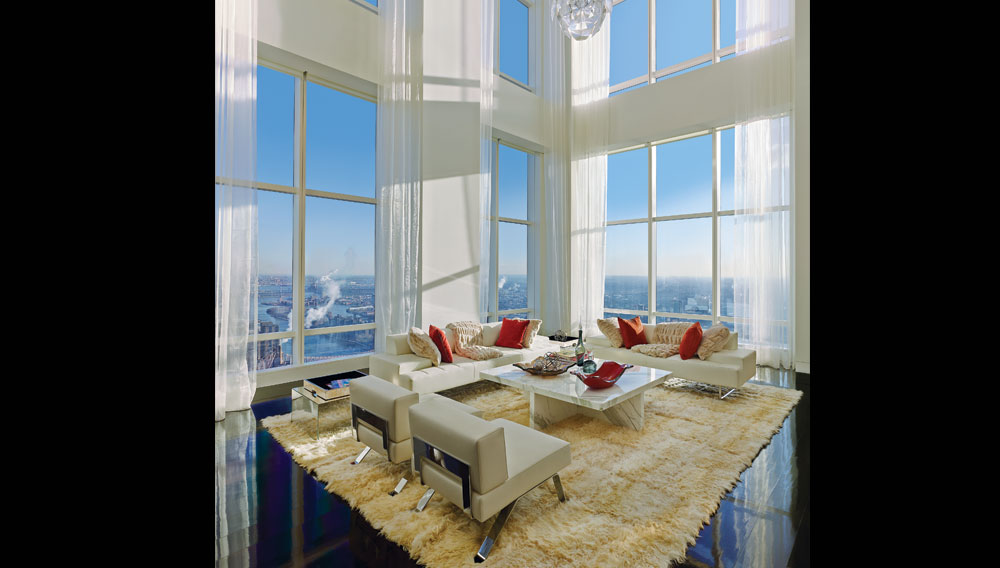 Shaping a raw, 20,000-square-foot space into a residence worthy of the Monets and Dalís that will decorate it is a tall order. When that space is perched 90 stories above Manhattan, it is a tall order in any sense of the term. “It was epic in almost every aspect of residential private urban living,” says Eran Chen, the executive director of ODA, the New York–based architectural and design firm behind this art ­gallery–like apartment. Working that high up required Chen and his colleagues to make several adjustments to their plans, such as withdrawing the design for a chandelier in the 34-foot-tall living space. An earlier version would have betrayed the sense of calm by chiming when the building swayed in the wind; the current version, with rounder shapes, does not. After a four-year build process—and with every fixture, furnishing, sculpture, and painting in place—the finished apartment represents an architectural accomplishment of the highest order.

The main living space showcases breathtaking views of New York City, as well as selections from the homeowner’s significant art collection. In keeping with the ambience of an art gallery, many of the residence’s communal areas feature low and unobtrusive seating and white hues that were obsessively well coordinated: ODA supplied the furniture companies with custom-dyed white leather to ensure that everything was upholstered in the same shade. The sitting area in the master bedroom features a Jean Arp sculpture on the coffee table and a pair of Monet paintings facing each other on opposite walls. Elsewhere, an area overlooking the living room is known as the Dalí Lounge for its collection of works by the Spanish surrealist.

No residential project of this size and scale escapes hiccups. The gorgeous custom-made white marble dining table suffered one of the most memorable. “It was 14 feet long and one piece,” recalls Ryoko Okada, a principal at ODA. “It fit in the elevator; the door height in the foyer was the problem.” The foyer had what Okada calls a “tiny neck” that made it impossible to maneuver the table around the two turns required to enter the residence. ODA thus had the table sliced into two pieces and reassembled it on site. “Every part of this apartment was a huge engineering undertaking,” Chen says.

A less troublesome piece of marble enlivens the Snaidero kitchen. The slab was given a three-­dimensional pattern resembling bamboo to provide visual contrast with the highly reflective surfaces of the Ferrari-red cabinetry and glossy white floor.

The home’s billiards area has a distinctive feature that essentially allows for an art display with either a G rating or an R rating. Two sizable works of art grace the room at a time, but in truth there are four, mounted in pairs on rotating panels. Some visitors are favored with edgy works such as Le Jardin des Delires (The Garden of Delirium), a 2009 image by the French photographer Gérard Rancinan that measures almost 10 feet by 6 feet. Others who have a lower tolerance for provocation are shown unobjectionable abstracts. The Rancinan flips vertically, while the opposite display (not shown) spins horizontally. “Both go very close to the pool table,” Okada says. “They [seem like they’re] just about to hit, but they don’t.”

Other delights of the common areas include a Japanese teahouse from the renowned Kohseki Sashimono workshop in Kyoto. Chen and Okada note that the structure glows like a lantern at night.

The shiny finishes found throughout the home are toned down in the walk-in closet, where muted surfaces offer a backdrop for Marguerite, a work in bronze by the French sculptor Marie-Madeleine Gautier. By contrast, the master bedroom was built around highly polished movingue wood at the client’s request. “It’s very distinctive and not a typical color to use for a floor,” Okada says, explaining that she tamed the shiny orange hue by filling the room with varying shades of creamy white. Marc Chagall’s 1930–1932 oil on canvas L’Ange et la Fiancée (The Angel and the Fiancée) hangs over the custom king-size bed. Tucked under the bed is a 60-inch fold-out television, which can be summoned with a finger-swipe across an iPad or iPhone screen. “The client is quite obsessed with having access to media and has hidden TVs throughout the house,” Chen says.

Private areas including the wine cellar and the library are characterized by dark-stained woods. Gracing the library is Picasso’s La Pique (The Pike), a 1959 mixed-media work.

ODA rightly takes pride in having built a home to house such fine artworks—and in the fact that the struggles involved in the creation did not manifest in the finished product. The designers did not just have to please their client; they had to mollify the building’s owners, the management, and the many high-profile residents living below. “We went through a very extensive series of presentations about our means and methods,” Chen says, “and we had to create relationships with the tenants themselves and persuade them that it would end eventually.”

The home’s views, on the other hand, are never ending. “There are very few towers around, and even so, they’re lower,” says Chen. “You can see everywhere in New York.”