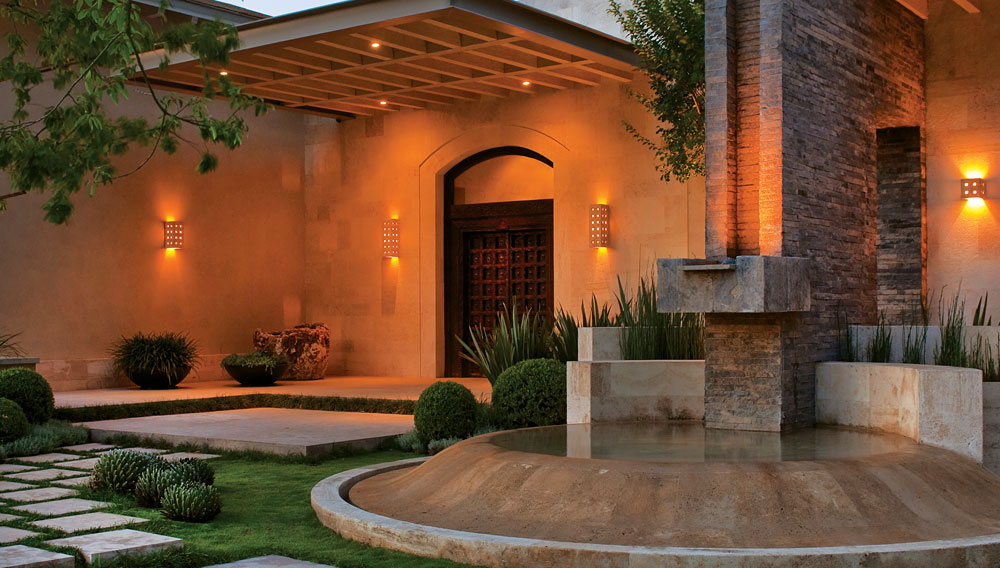 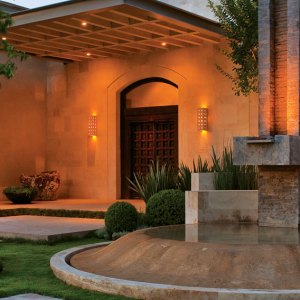 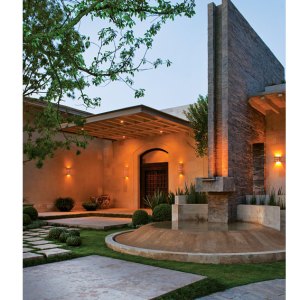 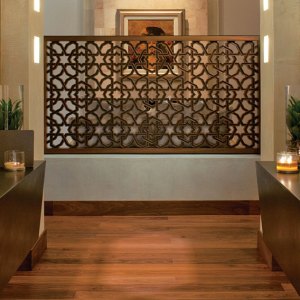 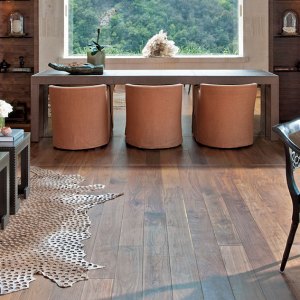 Out of This World

The dramatic terrain of Nuevo León’s Cumbres de Monterrey National Park proved irresistible for a 50-year-old entrepreneur, who bought 24 wooded acres in the park’s Chipinque nature reserve in 2003. He then commissioned the architect Mauricio Lobeira, a partner and cofounder of the firms Treceavo Plano (Nuevo León) and Ten Plus Three (Texas), to build Casa las Moras: a 22,000-square-foot, four-bedroom estate that would overlook Nuevo León’s capital city of Monterrey. “The family wanted the flavor of a hacienda,” says Lobeira, “but interpreted in a more worldly way.” Finished in 2012, the home indeed has a global mien that begins outside. The antique double door from India sits within the facade of Galarza stone from Puebla, Mexico. Inside, in the master suite, a walnut screen based on an Islamic design rests near artworks by the Mexican ceramist Ana María Montes de Oca and metal consoles from the Nelson Line in Dallas. Custom walnut shelves display pre-Columbian pottery in the library, where a shagreen-clad Parsons table serves as a bar. Indian columns with mother-of-pearl inlay mark the transition to the living room, where Brueton sofas and Holly Hunt chairs offer comfy vantage points.

The foyer ends at a glass wall that frames a small garden and, in the distance, the Sierra Madre Oriental. An Oushak carpet covers the floor between the custom settees, whose Jacobean-style legs echo those of the antique library table (purchased from Allan Knight), which once belonged to William Henry Vanderbilt. Atop the table are Russian icons collected by the homeowners. To the right of the entry hall is the dining room, where a customized Jean de Merry bronze chandelier sheds light on a walnut slab tabletop, from Bausman & Co., that rests on antique granite planters from India. J. Robert Scott designed the chairs, in Edelman leather, especially for the clients, and now offers the design in its line. French 18th-century sconces flank a painting by the Mexican artist Rodolfo Morales. The silk carpet is from Apositano Designs in Monterrey.

The informal family room achieves a rich textural mix. A bespoke Berman Rosetti sectional sofa in a velvety fabric fronts a fireplace sheathed in Galarza stone. Lobeira customized the David Sutherland ottomans with suede and zebra hide, and he acquired from a local collector the glazed Indonesian planters, which add patches of glossy green to the largely monochromatic surroundings. They flank another painting in the owner’s extensive Mexican collection, this one by the Michoacán artist Juan Torres Calderon. The custom audiovisual cabinet brings in the walnut accents that appear in the home’s other spaces. In the family room’s casual eating area, slipcovered chairs from Dallas’s E.C. Dicken tuck under a custom Gregorius/Pineo dining table with a built-in lazy Susan. Overhead, a repoussé copper chandelier with Chinese pongee silk shades, from the Baker Signature Lighting collection, recalls a Han Dynasty candle stand, which was the fixture’s inspiration. On the patio is seating from Janus et Cie’s Balou collection.

The backyard’s dining terrace, which is adjacent to the kitchen, maintains aesthetic harmony with the rest of the home. The Galarza stone that appears on the front facade is in play here, as is a set of Indian doors similar to the pair at the home’s front entrance. From Art of Old India in Dallas, the doors conceal the patio’s cooking equipment. Overhead, the 12-foot-high eaves—the same whitewashed pine beams used in a number of the home’s interior spaces—create an easy flow from indoors to outside. Thick stone columns support the overhang, while a massive mangrove root, found at Casa Antiguedades Maria Luisa in San Miguel de Allende, props up the dining table’s glass top. Lobeira surrounded the table with Dedon’s Richard Frinier–designed Tango chairs, seamlessly integrating, as elsewhere in the home, styles and eras, contemporary and classic.