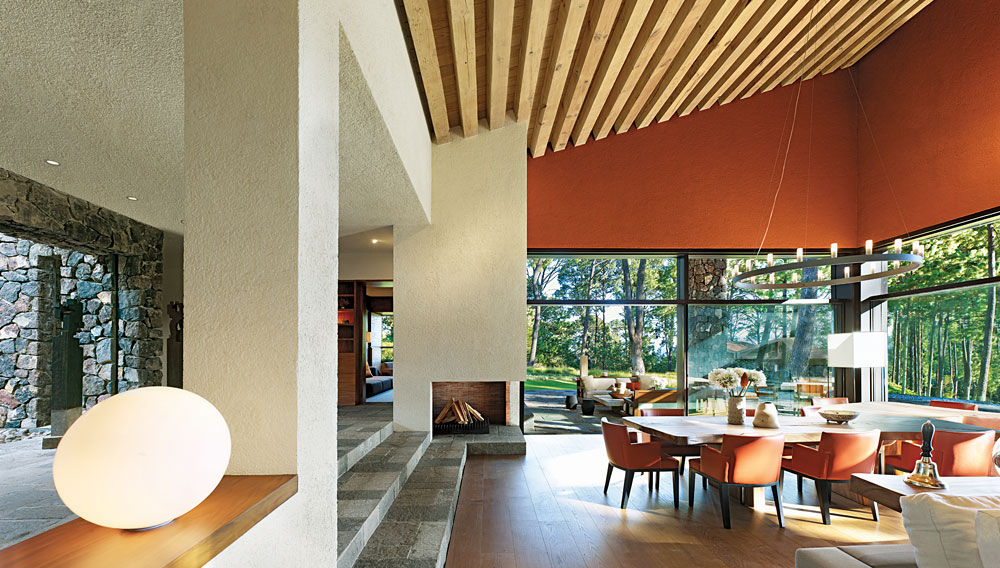 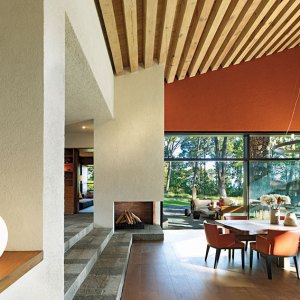 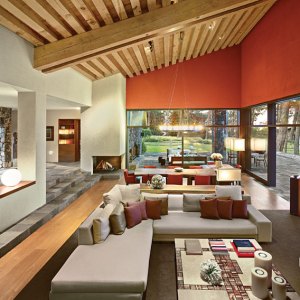 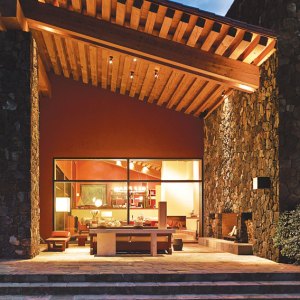 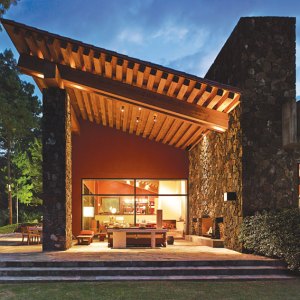 Having too many breathtaking sites on which to build is an unusual predicament. Yet the Mexico City–based firm of Legorreta + Legorreta faced that very challenge when it was commissioned to carry out the architecture and interior design of this striking weekend getaway in central Mexico, about 100 miles southwest of the country’s capital. The homeowners—a businessman and his wife—had presented the firm with four years’ worth of property acquisitions, which amounted to a nearly 46-acre hillside site that overlooked the surrounding peaks and valleys.

The solution, according to principal Victor Legorreta, lay in building multiple structures to take full advantage of each vantage point. “We thought, ‘Instead of one house, why not a series capturing several beautiful places?’ ” says Legorreta. He worked on the project with his father, the renowned architect Ricardo Legorreta, who died in December 2011 at the age of 80.

Completed in 2010, Casa Los Tecorrales encompasses five one-story structures totaling 25,000 square feet. The main and guest residences and the pool house feature ceramic-tile roofs—which are pitched and butterfly-like, with the highest edges pointing toward the best views—while plaster walls are painted terra-cotta red to complement the soil’s reddish hue. Hand-carved stonemasonry also graces the home’s exterior. Throughout the interiors, including the main house’s living and dining area, which opens to a stone terrace, pine beams cross the ceilings, floors are oak or sandstone, and millwork is parota, an exotic hardwood. These elements, Legorreta says, evoke “the weekend and the woods.”

In each of the estate’s structures, openings in the walls facilitate air circulation. Also affording comfort are the property’s calming views. The 9,200-square-foot main residence and the 3,500-square-foot, two-bedroom guest dwelling are nestled amid towering pines. Pale yellow Triana marble adds subtle luxury to bathrooms, including the main house’s master bath, where a corner sports Gordon Guillaumier’s Capri armchair in orange wool. The Triana marble-and-parota vanity is by Eduardo Santos. “We put acid on the marble for a texture more appropriate for the forest,” says Legorreta. The main pavilion’s master bedroom has a similarly neutral palette, though Legorreta’s signature bold colors do appear in the form of Toshiyuki Kita’s plum-wool-upholstered K10 Dodo armchair and a royal blue, hand-knotted wool rug.

Just off the main residence’s master bathroom sits a private terrace with a Jacuzzi and two leather 1966 Collection contour chaise longues by Richard Schultz that encourage sunbathing. The intimate space, which the homeowners access through sliding glass doors, is enclosed by handsome stone walls. “We found the sandstone tiles in an old hacienda,” says Legorreta, referring to the terrace’s complementary flooring. “It’s already aged, and kind of irregular.” The juxtaposition of stone and tile continues in the main residence’s 1,200-square-foot courtyard, where a series of long rectangular sculptures by Jorge Yázpik emerge from a reflecting pool like saplings newly springing from the earth. At night, the sculptures—made from reclaimed railroad ties and black volcanic stone—and the entire space are lit dramatically, thanks to a halogen lamp that floats on the water. “Art,” Legorreta says, “became an important theme” of the home.

Another artfully constructed stone wall marks the front edge of the property. After passing through the stone wall’s opening, visitors follow the cobblestone road, which leads to a greeting area with a fountain. There, a series of pathways connect to each of the estate’s five structures. The paths wind through manicured gardens, which, Legorreta says, invite you to “walk around the property as you live there.” Like the property’s entry wall, the 4,800-square-foot stone stable appears centuries old: “We know some very good local stoneworkers,” he says. In addition to seven stalls, the rectangular structure contains an office, a pond for bathing the horses, and a covered terrace with lounge seating. The terrace shown here features a custom pine block table with two parota armchairs, an acrylic-upholstered teak sofa, and a three-legged midcentury wood coffee table. The perforated copper pendant lamps are custom.

Large glass windows dominate in the 1,200-square-foot pool house. “It’s nice to enjoy more of the lake and forest here, whereas in the bedrooms we went for more intimate and framed,” Legorreta says. In addition to the indoor and outdoor pools, the pool house has a hot tub, a gym, a steam room, and changing rooms. Two fire pits help cast off any chill. “We wanted this to be a place you really go to, and it gets cold in this part of the country sometimes,” Legorreta explains. Flanking the indoor pool’s fire pit are acrylic-upholstered teak sofas and volcanic stone stools, all by Christian Liaigre, who also designed the sofas in the main and guest residences. Furnishings from the French designer were a request of the homeowners. The couple also welcomed sofas by Moda in Casa, including the L-shaped, acrylic-upholstered version that fronts the fire pit beside the outdoor pool.

Each winter, a group of visitors passes through the area near the homeowners’ retreat: orange-and-black-winged monarch butterflies, which migrate some 2,000 miles to hibernate at the region’s Monarch Butterfly Biosphere Reserve, a UNESCO World Heritage site. The couple might even see the creatures in the forested environs of their home’s 1.6-acre artificial lake, which is visible from the main house and was formed by damming a stream. “Of course it’s partly aesthetic, but here we have the rainy and the dry season, which is six months dry and six months wet,” says Legorreta. “So it is also a reservoir for irrigation.” On the shore sit three of Juan Soriano’s bird sculptures. A sunken tennis court, a paddle tennis court, a heliport, and a labyrinth of podocarpus hedges displaying carved clay chess pieces by the artist Adán Paredes appear elsewhere on the grounds, which, despite being discrete sites at the outset, form a cohesive setting for this unique hideaway.