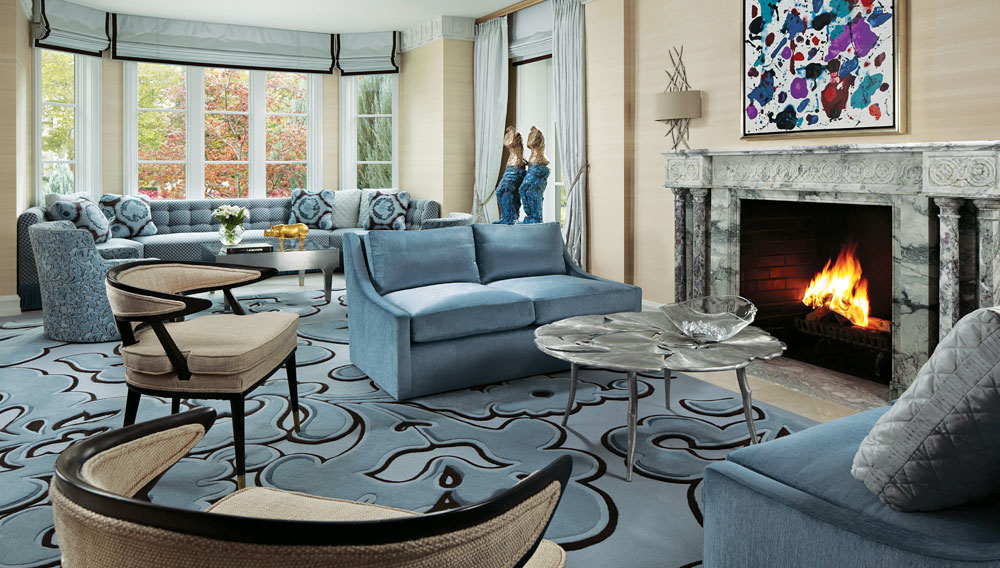 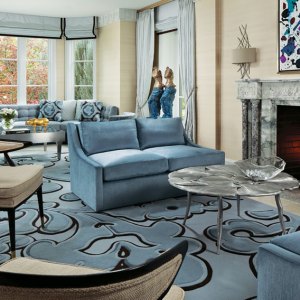 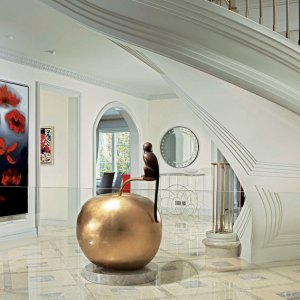 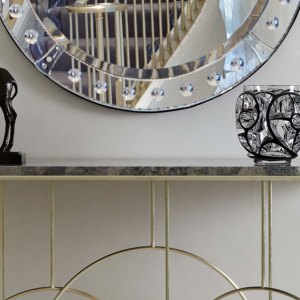 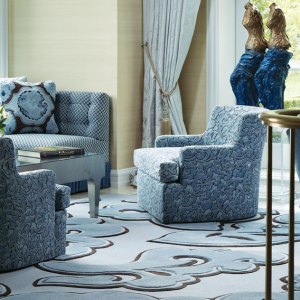 When the lady of this 20,000-square-foot house in Bexley, Ohio, requested a blue palette for the interiors, the New York–based designer Geoffrey Bradfield answered with vivid spaces—including the white foyer featuring hints of the wife’s desired hue. The entry’s subtle blues—brushstrokes in Ross Bleckner’s Field of Poppies and blue-gray accents in the marble floors—give way to crescendos of the color elsewhere. In the living room, blue has the floor, in a custom carpet by Stark. Harvey Probber chairs face a Claude Lalanne coffee table, and a Sam Francis abstract hangs above the antique marble fireplace.

The family’s art collection, including Lalanne’s Pomme de Ben, was a factor in the home’s design, as were the household’s three young children. The property had to be sufficiently expansive to showcase the artworks but still comfortable for the kids, and it had to be sophisticated enough for large-scale entertaining. The architecture, by Los Angeles’s Don Goldstein, together with Bradfield’s design, accomplishes all of this, and through an unexpected composition: Outside, Goldstein’s stone-and-shingle facade sets a traditional and stately tone, providing little hint of the modern adornments, such as the foyer’s Hubert le Gall console, that lie within.

A Venus de Milo–inspired sculpture by the pop artist Jim Dine draws the eye from the entry hall into the living room through a wide arch. The artwork, like much of the room, bears the color blue. “I used the practice of varying degrees of color saturation within the palette of pale blues, taupes, and icy grays throughout,” Bradfield says. The designer’s technique is perhaps best exemplified in the family room; Bradfield designed the carpet, which echoes the stepped ceiling. “This room is used by the family for games and television,” he says. “These are people who demand comfort.” To meet that demand, Bradfield went with bespoke, deep-seated sofas and chairs and a tufted ottoman rather than a coffee table. The absence of hard edges renders the room abundantly soft, making it safe for the young children to perch and tumble. A dark Sam Francis canvas is the space’s sole art, but the bold rug and the armchair fabric provide graphic punch.

Flair for the Dramatic

For the media room, Bradfield drew inspiration from his own life. “I was privileged to be a personal friend of Donald Deskey in the ’80s,” he says, referring to the late industrial designer whose glamorous 1930s interiors for New York City’s Radio City Music Hall influenced Bradfield’s work on the Deco-themed home theater. The rich, textured mohair velvet upholstery was gauffraged, a technique of embossing, by Brunschwig & Fils in Paris to match the carpet pattern, which was designed by Bradfield. He also had the occasional tables plated in white gold—one of his signature touches. The room’s only infusions of color beyond the predominant indigo blue are the hues in Álvaro Barrios’s cartoon paintings, which the homeowners purchased at Nohra Haime Gallery in New York City.

The dining room also references ’30s glamour, most apparently in a period chandelier the family acquired through John Salibello Antiques, also of New York. Artistic Frame’s Einstein chairs in a custom finish—surrounding a François-Xavier Lalanne table—also have a Moderne flair, as do the saddle-stitched faux leather walls. Another Sam Francis abstract hangs above one of two red lacquer credenzas with acrylic pulls.

“This is a feminine domain,” says Bradfield of the master bedroom, where the wife gave him carte blanche to layer on supple, silky textures and curvaceous forms. Yard upon yard of White Hall—a textile he designed for Stark—drapes and pools around the windows and cascades over the bed. Bradfield liked the textile’s pineapple motif for the custom, Tiffany blue–hued carpet, so he had the design embossed in the floor covering. Silk passementerie from Osborne & Little gathers the draperies. The 1950s gold-branch side table—a piece that Roric Tobin, vice president of Bradfield’s namesake firm, found at John Salibello Antiques—provides another layer of shimmer. The balcony overlooks the property’s lush grounds, as well as a neoclassic building that houses the husband’s automobile collection.

The focal point in the master bath is the elaborate vanity. The designer’s concept for the dressing table draws from the works of the French architect and designer Armand-Albert Rateau, a Deco master who often incorporated ribbed and gilded surfaces on his tables and chests, which usually stood on slender, tapered legs. Bradfield’s result is a strikingly elegant vanity that seems to undulate along the mirrored wall.

If the master bedroom is the wife’s domain, then the smoking terrace is the husband’s. He is passionate about cigars, so the design team created a brick-columned, limestone-floored terrace where he can smoke and enjoy a good bottle of Cognac with friends. The space gets plenty of use year-round, thanks to heating elements concealed in the coffers of the ceiling; even with snow piled on the adjacent lawn, the terrace is comfortably warm.

Adding further comfort to the space are various furnishings, many of which highlight shades of green—a departure from the interiors’ prominent blues. The table is from Ironies, of Berkeley, Calif., and features a bronze base and a cast-stone top. The cast-aluminum backs of the Birch chairs, which are also from Ironies, incorporate a wood grain pattern. For the terrace’s upholstered seating, Bradfield chose pieces from Janus et Cie that pair woven espresso-colored rattan with green cushions. Though the color breaks from the home’s blues, it paints an outdoor scene as vivid and fancifully refined as the rooms inside.