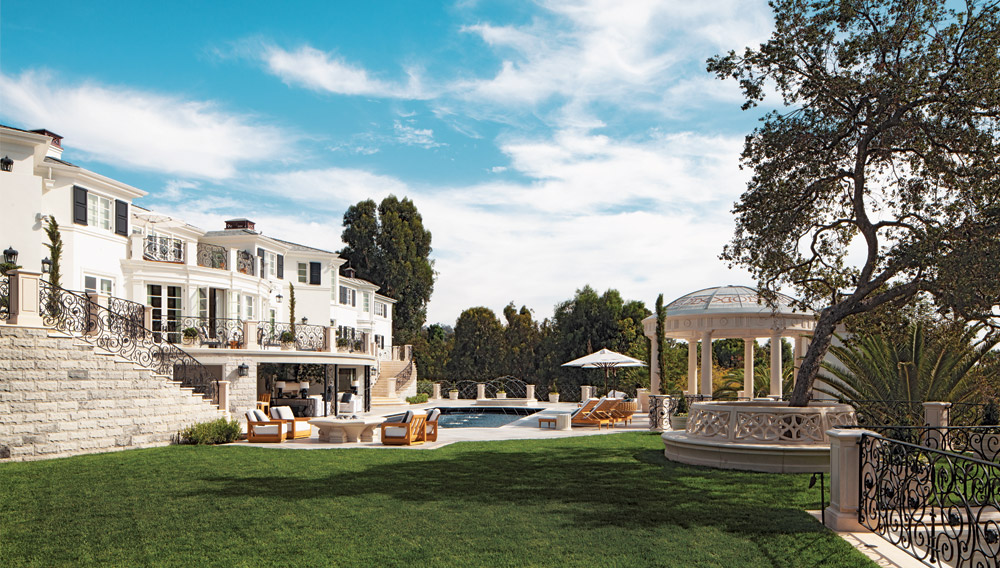 In his lifetime, the esteemed architect Paul R. Williams designed more than 3,000 homes, many of them for Hollywood’s glitterati and other luminaries. In 1938, he completed a house in Los Angeles’s Bel Air neighborhood for the businessman Frank Wood, and successive owners—including the country singer Kenny Rogers, who named it Liongate—altered the structure. By the time the current owner purchased Liongate in 2010, “it was unrecognizable,” says Dean Larkin, whose namesake West Hollywood, Calif., firm was recently hired to renovate and expand the property to almost 26,000 square feet—more than double its original size. Still, Larkin’s team endeavored to bring back the spirit of Williams’s design, and their result, a furnished home with 11 bedrooms and 17 bathrooms, is on offer through Hilton & Hyland for $65 million.

Having researched the interior details that Williams employed in the 1930s and 1940s, Larkin decided to outfit the foyer with recessed paneling, cornices, and pilasters. The architect also repositioned the formerly concealed stairs and designed new railings that are modeled after the wrought iron supports for the home’s original rear loggia, which Rogers, during his occupancy, enclosed to create a living room. Railings with a similar motif line the rear facade outdoors, near the pool, which is believed to be original to the property.

The team at Los Angeles’s KNA Design—owner and principal Kirk Nix, creative director Michael Medeiros, and designers Matthew Ray and Christie Carvajal—oversaw the interiors, including custom architectural elements, finishes, and furnishings. “We never strive for a particular style,” says Medeiros. “We want the interiors to look collected over time.” An abstract work titled Candy Crush III, by Sydney Edmunds, hangs in the foyer above a custom chest by Mario Grimaldi International, which also created the custom table by the stairs (Desiderio del Cuore, a sculpture by M.J. Anderson, graces the tabletop) and the mirror by the Steinway piano, where a Sebastian Giovanni reproduction of a Regency window seat serves as a bench.

Out of the Woods

One of the home’s new wings houses a temperature-controlled wine room, where, at one end, a Mario Grimaldi table and A. Rudin stools sit beneath a custom chandelier from ELA that suspends from a cove ceiling of French oak. The taller seating, says Medeiros, “allows you to take advantage of the spectacular views of Century City” beyond the tree line. On the floor, French oak frames the large marble tiles, and hand-applied Venetian plaster covers the lustrous walls. The formal family room, which is adjacent to the living room and a billiard room, incorporates wire-brushed and cerused oak paneling and ceiling beams, also by Mario Grimaldi, that, owing to their lighter hue, impart a casual, comfortable feel to the space, as do the Dessin Fournir leather armchairs and the deep-seated Gregorius Pineo sofa (with pale blue Hermès toss pillows). The oversize cabinet behind the sofa, which Dessin Fournir produced according to the design team’s specifications, has glass doors with handpainted gilt. The curtains are fashioned of silk from the French textile house Manuel Canovas.

Though the dining room was gutted to the studs, says Larkin, it was reconstructed “as close to the original as possible.” From the ceiling, which showcases custom moldings, hang double rock crystal chandeliers from Dennis & Leen. The silver-leafed chairs wear leather upholstery on the front and Donghia silk on the back. The fireplace is crafted from Saint Laurent marble, while a wall covering of woven jacquard from Omexco for Romo envelops the entire space.

A casual family room and kitchen form a single spacious area. The 14-foot-long islands are topped with more Saint Laurent marble imported from France because, says Medeiros, “we couldn’t get anything that size here [in the States].” KNA designed the light fixtures that hang above the islands to ensure their proportions would be complementary. The room also features chevron-patterned walnut floors that were hand-planed on-site, custom cabinetry, and a marble backsplash by European Artstone. The large farm sink is from Rohl.

The library occupies its original footprint (and contains the home’s fully restored original safe), but all of the mahogany millwork and ceiling beams, by Mario Grimaldi, as well as the walnut floors, are new. Red velvet curtains with Samuel & Sons trim and a graphic area rug from the Rug Company “add a touch of youthfulness to the serious English-gentleman’s-study feel of the room,” says Medeiros. It is one of the few spaces in the house that depart from the “common language” of clean white paneling. Two Nancy Corzine armchairs face a Smith & Watson desk.

For the 12-seat private theater, which is located next to the wine room and under the kitchen in a new wing, KNA had the acoustical fabric hand-silkscreened with a custom pattern. Icarus sconces by Vaughan illuminate the space. Accessorizing the leather theater seating are various velvet pillows (zinc colors by Romo, aubergine by Janet Yonaty).

Marking the entry to the master suite is a handsome Austrian Biedermeier-style secretary desk  from William Switzer’s Signature collection and a stretch of limestone flooring with gray marble trim. It is a fittingly grand introduction to the private space. Camel-colored silk upholstery and more than 5,000 individually hammered nail heads cover the walls of the bedroom, which features a coffered tray ceiling that “gives the room an elevated sense of importance,” according to Medeiros. “We were able to celebrate the additional ceiling height we weren’t able to have on the lower floors,” he says. At the foot of the Dessin Fournir bed, which bears Holly Hunt leather, is a pair of Nancy Corzine–designed Marston benches with Greek key motifs. Flanking the headboard are mirrors trimmed in glass mosaic by Mario Grimaldi. Two paintings by the Los Angeles–based artist Chase Langford hang above a shagreen chest of drawers (also by Mario Grimaldi) that is based on an André Arbus design. Sewelson’s, of Los Angeles, hand-tufted the wool-and-silk wall-to-wall carpet.

The master suite’s his and her bathrooms are a study in contrasts. “We didn’t want [hers] to be overtly feminine,” notes Medeiros, “so it has a softer elegance than his bath.” One aspect of this softer aesthetic is her bathroom’s recessed ceiling dome with a hand-applied finish. From the dome dangles a custom rock crystal, French-style chandelier by ELA. The freestanding Toulouse tub by Victoria + Albert sits in the window bay, on a Madreperola quartzite floor with interlocking circles of Thassos marble.

In his bathroom, the Crema Marfil marble floor, with its square pattern and tigereye and Saint Laurent stone insets, is a restrained design that complements the simple geometry of the ceiling moldings. Tigereye also appears in the 22-karat-gold fixtures by the bath-fittings manufacturer Sherle Wagner, which plated the custom-designed tub filler, from Rocky Mountain Hardware, to match. Undoubtedly, the standouts are the wall panels—spectacular, hand-selected slabs of book-matched onyx that, Medeiros says, serve as “the focal point, like works of art.”