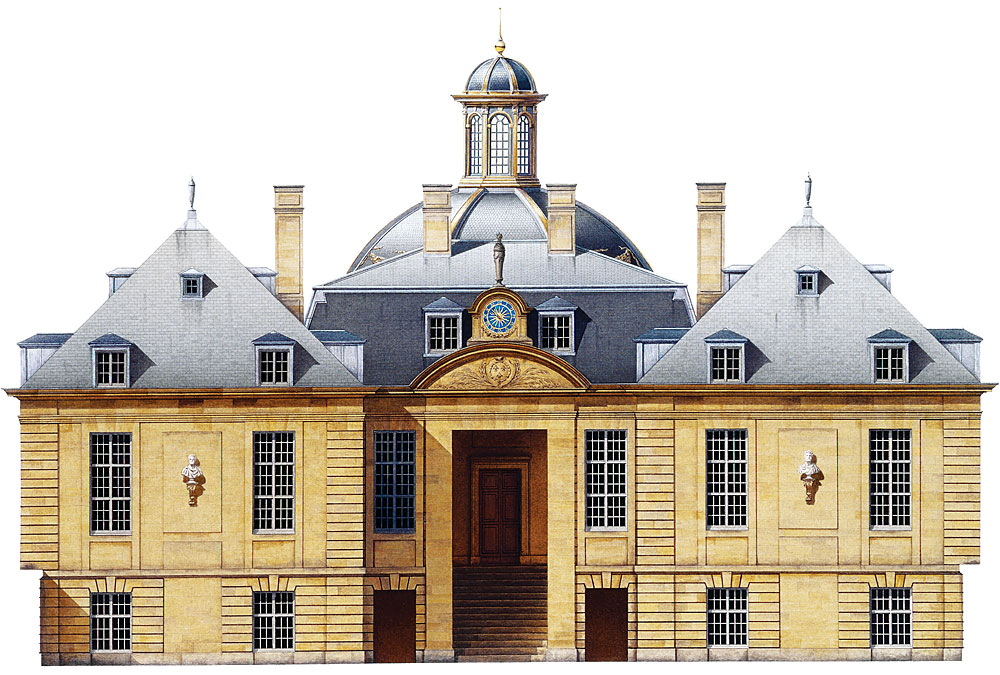 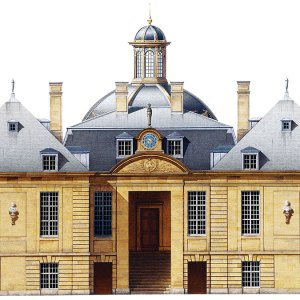 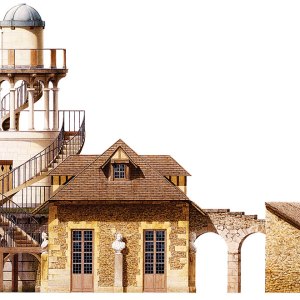 Andrew Zega and Bernd H. Dams’ architectural watercolors are on display at New York’s Cooper-Hewitt National Design Museum, at the Musée de I’lle-de-France at Sceaux, and in five books that they have coauthored. (Their latest, the $1,400 Versailles: The Château and Its Satellites [Paris: Connaissance et Memoires, 2007], presents the pairs’ paintings of historic French châteaus and parterres.) Other, lesser-known works of theirs—including maybe a watercolor or drawing of a grand Colonial in Greenwich or a modern manse in Montauk—can be found hanging in the houses that each rendering depicts.

The Paris-based artists, who have been working together for nearly two decades, accept private commissions for paintings of homes as well as gardens and objets d’art. Dams, who draws the structures, and Zega, who applies the pigments to Dams’ sketches, view their work as an artist-client collaboration. “Throughout each stage of a commission,” says Dams, “we are in regular consultation with the client.”

Count Guy de la Bedoyere, the mayor of the French hamlet Raray, near Chantilly, experienced the pair’s process firsthand when he commissioned a painting of his family’s ancestral home. Bedoyere, who says he considers the artists’ renderings to be the most refined and elegant of this era, notes that “[Zega and Dams’] watercolors are not depictions of reality, but only through those pictures are we put in a position to see reality.”

Dams expresses a similar view of his and his partner’s work: “Photography is a technical, instantaneous medium for recording architecture, but a watercolor rendering distills the essence of that architecture while imbuing it with the personality of its owner, the way he wants to be perceived through his home.”

In addition to watercolor, the artists work in charcoal, colored pencil, gouache, and ink. Commissions usually take about three months to complete, and prices depend on a piece’s size but usually fall in the $5,000 to $15,000 range.

To capture a home’s architectural details, Zega and Dams rely on skills that each first cultivated independently. Zega, who was born in Bucks County, Pa., in 1961, “fell in love with watercolors from the get-go,” he says. He painted plants and birds when he was a boy, and later, as a student at Princeton University, he created architectural renderings for related coursework. (Ultimately he changed his major to English.) After graduation, he worked as a book editor at Bantam

Doubleday and Chanticleer Press, and he might have remained in that profession if a former Princeton classmate, working for architect Robert A.M. Stern in New York City, had not remembered Zega’s watercolors and called on him for a project. What ensued, Zega says, was “years of work for the office before going on staff full-time.”

In 1988, while working for Stern, Zega met the German-born Dams, now 44, who joined the Stern staff as an architectural designer. Dams had earned a master’s degree in architecture from Munich Technical University, where he wrote his doctoral thesis on the 17th-century French château of Marly.

A recent commission in Paris required Zega and Dams to paint a series of six watercolors depicting the Musée des Arts Décoratifs, a wing of the Musée du Louvre devoted to interior design. The museum will use the watercolors as promotional devices, reproducing them on note cards, stationery, and perhaps other media. “The goal,” Dams explains, “is for visitors to identify the museum with certain architectural details, much like the New York Public Library and its lions.”

Likewise, the objective with a private-estate piece is to bring exceptional, often overlooked architectural details to the fore. “The greatest compliment we receive,” says Dams, “is when clients say, upon seeing our watercolors, ‘we never knew how handsome our home is.’ ”