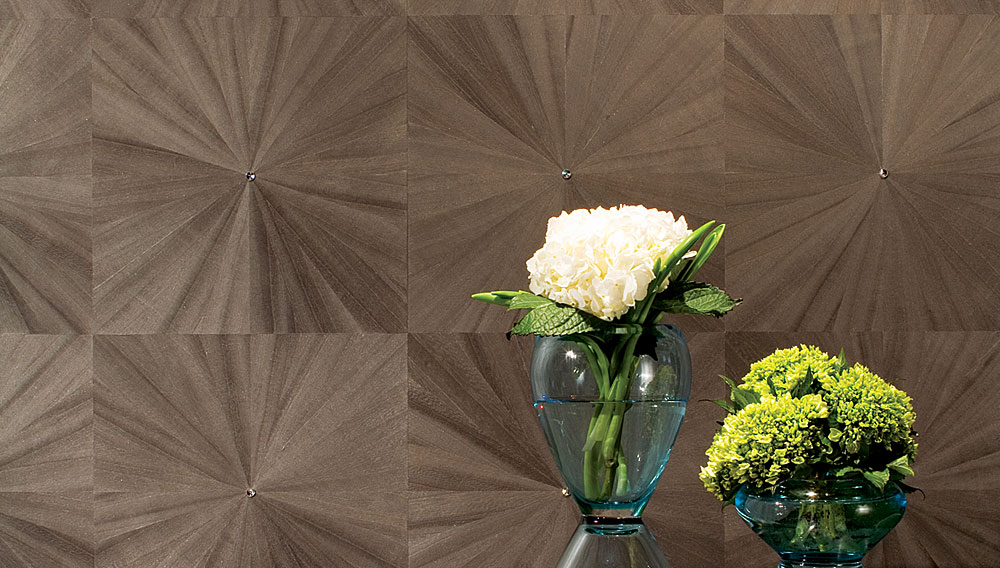 Upholstering a wall with small rectangular sheets of mother-of-pearl or with millions of shimmering glass beads might seem more extravagant than tasteful—but not to designer Maya Romanoff. The 68-year-old founder of the eponymous furnishings-and-surfacing-materials company views his unusual wall coverings as an art form. Romanoff’s latest dazzler is Ajiro Sunburst with Crystallized Swarovski Elements (starting at $125 per yard), an inlaid wood veneer adorned with Swarovski crystals or crystal pearls.

Ajiro Sunburst is glamorous yet understated, so it may well be more warmly received than were some of Romanoff’s earlier, bolder works. Past projects include plaid and tie-dye wall coverings that the designer applied to a client’s walls and then immediately took down at the client’s behest. That said, Romanoff’s collections today—40 years after his company’s founding—are no less adventurous than some of those youthful experiments.

Romanoff’s journey to his current role as an innovator of wall coverings began after anthropology, political science, and classics studies at the University of California, Berkeley, in the early 1960s. “I traveled around North Africa, India, Pakistan, and France,” he recalls. “I began to see different forms of global art and technique, and the knowledge I gained shaped my creative thinking and early explorations of fabric, form, and uncommon art.” Formative stints at various Paris couture houses followed, and, in the seminal year of 1969, Woodstock inspired his fascination with tie-dye.

Today, Romanoff’s wall coverings comprise 17 collections offered in multiple finishes and custom options. The company’s collaboration with designer David Rockwell spawned Blanket ($175 per yard), a subtly embroidered felt. The handmade Mother of Pearl and Beadazzled collections ($64 to $200 per yard) “have been installed in more powder rooms than you can count, and on tray ceilings, fireplace surrounds, bedrooms, and hallways,” Romanoff says.

Since its inception, the company has garnered prestigious commercial and residential commissions. Romanoff created the glistening glass-bead curtain for Chicago’s Harris Theater for Music and Dance at Millennium Park, as well as installations for three Nobu restaurants, most of the guest rooms at Steve Wynn’s Encore Las Vegas resort, and the Green Room for the 2007 Academy Awards at the Kodak Theatre in Los Angeles. On the residential end, the company has done lavish projects for a number of prominent clients, including the crown prince of Dubai. “One project that particularly stands out was a large home theater in a New York residence designed by Abe Jerome,” Romanoff recalls. “He used a beautiful Bergamo fabric for draperies, and we made a custom glass-bead mural that replicated the original Bergamo fabric.”

For his company’s 40th anniversary this year, Romanoff is collaborating with designer Amy Lau on a new line of wallpaper that will embrace timeless, rather than trendy, designs. “It will be a limited-edition redesign of our original tie-dyed wall-covering collection,” Romanoff says. “Back to my roots.”

Romanoff often asks his designers which pattern is their favorite—a question even he finds hard to answer. “It keeps changing as things evolve,” he says. “I am surprised and pleased by the new designs that come out of our design workshop. The combination of new materials, color, and technology continues to inspire me.”