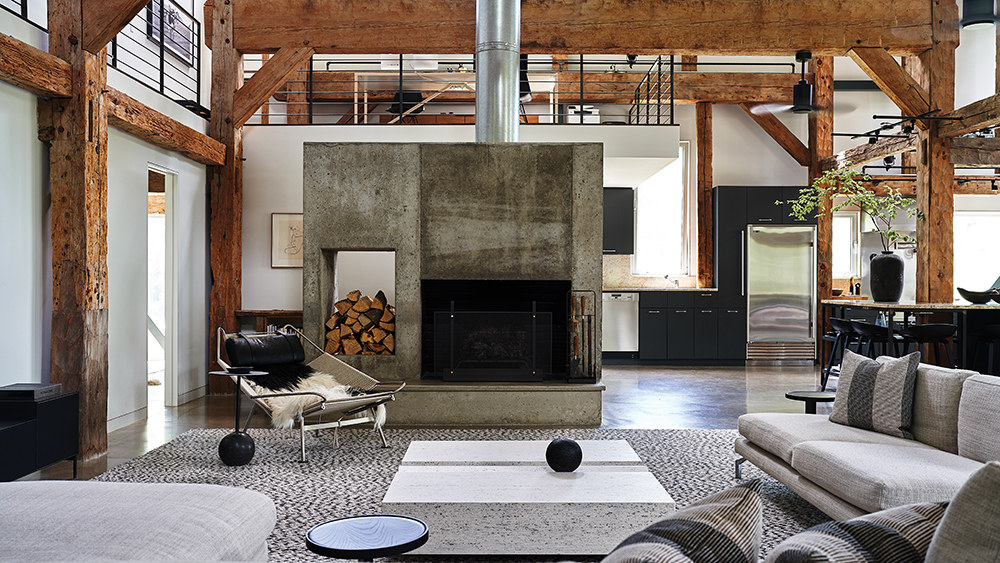 Renovating a house without traditional walls is a challenge for any interior designer. But for Todd Raymond, the beams of a 300-year-old barn served as expert guides as he updated a Hudson Valley home for a pair of New York lawyers looking for a weekend getaway. Rather than conventional walls, “the beams helped create ‘corners’ in each space,” Raymond says. And this is the coolest part: The beams mostly don’t touch the rest of the building. “They’re set 10 inches off the walls,” he says.

The barn was originally a Dutch structure that was first rebuilt in Vermont before being moved to Millerton, N.Y., between 2003 and 2004, where it was given new life by architect and Harvard Graduate School of Design professor Preston Scott Cohen. The lower-level rooms, from the dining room and lounge to the living room and kitchen, flow into one another across floors of polished concrete adorned with shearling rugs. Raymond stripped away the old, offensive yellow maple from those beams and painted them elegant black.

It was the land that the clients first fell in love with, Raymond says. But the barn didn’t disappoint. “When you are in the space and you realize the majesty of it, and the beauty of the beams, the very last thing you want to do is cover them up,” says the owner, who requested anonymity. “We’re a family of two and a dog. We entertain a lot. We have a lot of guests. We’re very comfortable living in that space, it feels very natural.”

The home’s overall aesthetic is uniformly simple on the first floor and includes a range of signature pieces, such as a James de Wulf concrete table, a vintage Paul Kingma cocktail table and a Hans Wegner lounge chair. Most of these pieces are black, much like nearly all the furniture across the lower floor. Raymond says the hue, though potentially unconventional, works well “as a neutral color and a way to tie elements of a project together. This felt particularly good to do here in this home as it provided a nice supporting role and backdrop to all the beams, allowing the beautiful honey-brown tones of the wood to be the standout.”

The open-plan structure also allowed Raymond to add some surprises along the way, such as a lounge that’s adjacent to the dining and living rooms. Anchored by a bean-shaped julep couch, the space offers an alternative to hosting guests in the living room. “It’s a perfect spot for morning coffee or cocktails,” he says.

Many of the home’s most special touches required extremely delicate installation. Raymond purchased a black Workstead light fixture and then had his team construct a scaffold to hang it from a 40-foot ceiling. “We chose it because of its simplicity,” he says. “The drama is in full effect here with the 40-foot drop juxtaposing the very sleek and minimal fixtures. The dining table is concrete with a pie-shaped cutout.”

An industrial-strength fireplace dominates the living room and serves dual purposes. “It’s an architectural element that adds a brutalist bit of drama,” says Raymond. “I think the smooth concrete plays into the simple geometrics of the entire home.”

Work on the three-bedroom space, purchased shortly before Covid struck, slowed down during the pandemic. Health matters and shipping delays extended the build even further. “The barn itself was already there, and we’d done the renovation work but we didn’t have a lot in the way of furniture,” the owner says. “There were some supply-chain issues that we dealt with. It was such a refuge for us during the pandemic, we were lucky to be there. It didn’t feel bad at all.”

The pleasures afforded by the delay make it seem worthwhile. The bedroom windows are so large you may feel like you’re sleeping in a “tree house,” says Raymond. He is especially proud of the breezeway, the home’s entry point that also offers a glimpse of the property. “When you walk in the front door, this is the [first] room you’re standing in,” he says. “It’s long and narrow, so we put an informal dining table at the end to be able to view from there.”

The couple are famous for entertaining—and initial reactions from guests first entering the barn have been priceless. “When people see it for the first time, there’s a shock and an intake of breath because it kind of feels like a cathedral,” says the owner. “We definitely haven’t had any complaints.”

If you prefer to hang outdoors, the fire pit, set on a bed of pebbles surrounded by black Adirondack chairs, offers truly stunning sunsets. “Every time we sit around the fire pit, we think, ‘Wow, this is an incredible part of the world,’ ” says the owner. “What Todd has done, which is very beautiful, is that he’s taken this very large living area and made if feel like the spaces are not all clumped together.”

In the end, it’s all about perspective. “Lying on those concrete floors and looking up 30 feet through the beams is magic.”