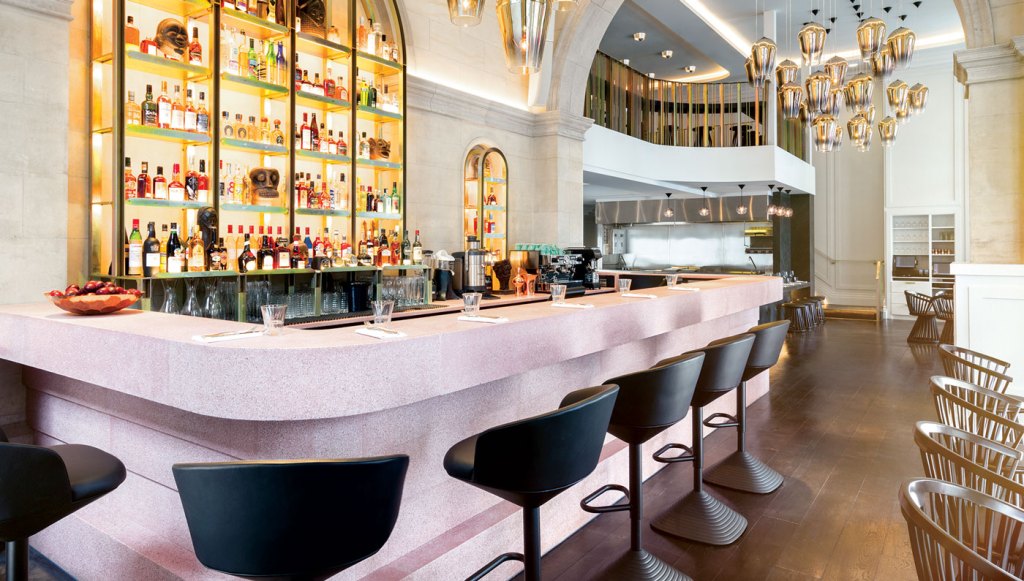 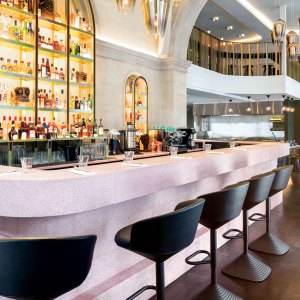 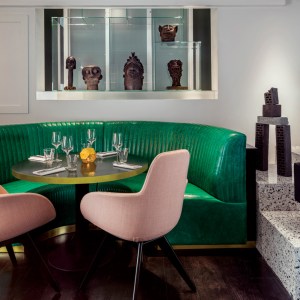 Since it opened in July on the Strand, Bronte (bronte.co.uk) has been creating considerable buzz—and not just for its wide-ranging, daylong food-and-drink menus overseen by executive head chef Andrew Lassetter. Its vibrant interiors are giving the Trafalgar Square restaurant a serious pulse, attracting diners who may be design buffs first and foodies second. Owned by Trevor and Adam Davies, the father-and-son proprietors of London’s cabaret-themed bar Circus, the 260-seat Bronte serves up an enticing atmosphere courtesy of Tom Dixon and his Design Research Studio (designresearchstudio.net).

The Tunisian-born British designer divided the eatery into several spaces punctuated by pops of color and filled them with his pieces. Dixon’s Fan chairs in black populate the main dining room, which also includes an open green-granite kitchen and a pink-concrete breakfast bar. A handful of steps lead down to the cocktail area, where guests pull black stools up to a gleaming pewter bar. Here, custom green-leather booths pair remarkably well with Dixon’s dark-teal Micro Wingback chairs and salmon-colored Scoop chairs. Suspended from the ceiling are his spherical, brass-plated Plane fixtures, arranged in rows like theater lights.

It all sets the stage for Lassetter’s culinary creations. Guests seated in the main dining area eat and drink beneath Dixon’s Fade pendant lights, which hang in glimmering gold clusters, and catch glimpses of the bustling city through nearly ceiling-high arched windows.

Already known as a hub of fine design, London’s Brompton district received a style boost with the September opening of the Sé showroom. On display in the European brand’s new 680-square-foot flagship are three notable collections: one each from French designer Damien Langlois-Meurinne, Slovenia-based Nika Zupanc, and Spanish-born Jaime Hayon. Zupanc’s Stay bench (about $3,205 as shown), which made its

London debut at the showroom, captivates with its oblong powder-coated steel frame and the client’s choice of upholstery. (se-collections.com)

For nearly two decades this maker of hand-knotted rugs has worked with top designers on its fun and fresh creations, and the company’s latest additions are the cultivations of one longtime collaborator: the British fashion designer Vivienne Westwood. Among her four most recent designs for the brand is Vivienne’s Rose Dust ($145 per square foot), a wool-and-silk botanical print depicting mauve-colored roses in bloom. (therugcompany.com)

​The San Francisco–based PlumpJack Group has added another bar to its home-city portfolio. Wildhawk, located in the Mission District, opened in April as a cozy watering hole with eclectically elegant interiors by Jay Jeffers. In the mix are modern zebra-print barstools, vintage-style punched-tin ceiling tiles, and floral wallpaper. Throughout the space, patrons encounter nods to the bar’s namesake: Lola “Wildhawk” Montez, an Irish dancer who entertained the City by the Bay in the mid-1800s. (jayjeffers.com, wildhawksf.com)

Color is not an afterthought in an eye-catching furnishings line recently introduced by the Parisian houses Christian Lacroix and Roche Bobois. The collection, which debuted in September, includes a side cabinet, a console, and the chairs shown here ($1,470 each). Mimicking the shape of haute-couture mannequins, the chairs have brass leg coverings and an ivory-and-black striped pattern with a contrasting hit of red, fuchsia, or blue on the outside of the seat back. (roche-bobois.com)

The accessories created by Shanghai’s Neri & Hu studio for the Italian company Poltrona Frau ensure that the entryway—the space guests first set foot in—gets more than a passing glance. The five designs in the Ren collection are equally suited for use elsewhere in the home and incorporate materials such as Canaletto walnut, brass, and leather. The mirrored clothes rack ($4,590) features a brass-and-leather-framed mirror and two brushed-steel coat hooks. (poltronafrau.com)

Earlier this year, the London-based designer Kelly Hoppen celebrated a career spanning four decades with a striking new line of furnishings for Resource Decor. Called Retrospective, the assemblage includes more than 100 pieces ranging from velvet chairs to copper pendant lights. Among the standouts is the Sting Chest ($6,597), a black maple cabinet with angular handles and legs in mirrored brass. (resourcedecor.com)