Looking for Robb Report UK? Click here to visit our UK site.
×
By Osman Can Yerebakan

Osman Can Yerebakan's Most Recent Stories 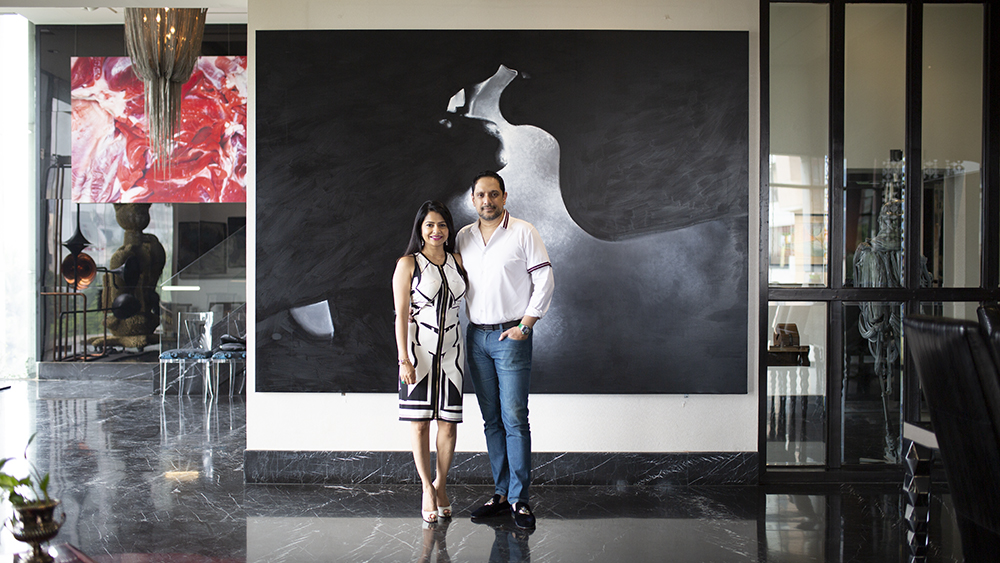 On a late Friday afternoon in February, Nadia and Rajeeb Samdani—the mega art-collecting couple based in Dhaka, Bangladesh—had just placed their Haegue Yang commission, a tall, almost Seussian-looking sculpture titled North of the Mountain, by a floor-to-ceiling window on the fifth floor of their six-story house in the capital’s fashionable Gulshan neighborhood. The Berlin-based artist’s joyful piece, which invites viewers to join the fun by giving it a gentle push, thereby ringing its hundreds of tiny gold-colored bells, is the newest jewel in their growing cutting-edge modern and contemporary collection, which totals around 2,000 artworks. “You can try it later,” Rajeeb promises with a broad smile.

The Samdanis situated the sound work next to a second piece with a musical theme: a copper, granite and coal sculpture of long tubes that lead to what looks like the flared bell of a trumpet or trombone, a commission by another sought-after artist, Alicja Kwade. Together, the artworks epitomize many of the Samdanis’ collecting habits: They are by rising stars the collectors know personally, are acquired on the globe-trotting couple’s travels like souvenirs and, while not lacking conceptual rigor, have a touch of whimsy.

The couple’s devotion to their art is so fervid that it takes precedence over their house’s architecture. “We will build or knock down a wall to accommodate another work,” Nadia says. “We’ve acquired the art and then built the right space for it, not vice versa.”

A view to the Samdanis’ living room.  Asif Salman

The Samdanis named their house Golpo, Bengali for “story” or “fairy tale.” The house, which stands in an affluent neighborhood of embassies, international hotels and luxury shopping, does justice to both definitions, telling of the couple’s passion for collecting. Designed in collaboration with Brain Train Studio, a subsidiary of their Golden Harvest business conglomerate, and completed in 2012, Golpo is a hybrid of a home and a museum, manifesting the couple’s desire to live immersed in art from the ground floor on up. An LED sign reading sold out by Raqs Media Collective greets visitors into a space that, nearly devoid of furniture or other domestic trappings, resembles a mini gallery. British artist Ceal Floyer’s sound installation ’Til I Get It Right, in which Tammy Wynette melancholically sings, “I’ll just keep on ’til I get it right,” chimes among five colorful abstract tapestries by Bangladeshi modernist Rashid Choudhury, a hallucinatory Anish Kapoor mirror sculpture and late Iraqi-British architect Zaha Hadid’s voluptuous sculpture-like sofa. “We heard Floyer’s sound piece in Documenta 13 in 2012 and fell in love with the determination in the lyrics,” explains Rajeeb, referring to the quinquennial art event that takes place in Kassel, Germany.

The Samdanis rotate the art on display at Golpo every 18 months. “You don’t want art to sit in a warehouse,” Nadia says. But it’s not a simple process. “It takes almost three months to figure out, looking through the archive and deciding where to place it.” Then comes the lighting.

A Jitish Kallat bronze sculpture is mixed with a Tracey Emin neon and pieces by Christina Quarles.  Asif Salman

The Samdanis’ engagement with international institutions has focused heavily on connecting Western audiences to the art of the couple’s part of the world. At the Tate, for instance, Rajeeb cofounded (and Nadia joined) the South Asian Acquisitions Committee to support acquisitions and loans of artworks from the region, and they have recently donated Choudhury tapestries to the Metropolitan Museum of Art and the Tate. A bridge between East and West is visible in Golpo as well. Works by Western and Eastern artists hang alongside each other, and at times an artist of one culture deals with the other directly, such as Pawel Althamer’s duo of skeleton-like human figures, Safik and Nahid, named after two Bangladeshis, which were exhibited at the Venice Biennale in 2013. The Polish artist, a close friend of the couple’s, also gifted Rajeeb his favorite artwork in their collection, a painting Althamer created in collaboration with the couple’s three daughters for their father’s birthday a few years back.

Raising children in an art-filled environment was less of a challenge than they expected, Nadia says, noting their daughters grew up knowing to touch with their eyes, not their hands. “Whenever they had play dates,” she adds, “they needed to explain to their friends these were not toys to play with.”

Nadia caught the collecting bug from her parents, though the art of her own childhood was a far cry from a sound installation or an interactive sculpture. “My parents are still surprised when we buy a disc or a written agreement as art,” she notes with a smile. After studying economics and management at Independent University in Bangladesh, she initially collected based on the aesthetic she learned at home. Her first acquisition, at age 22, was a canvas depicting peasant life by her country’s pioneering avant-garde painter SM Sultan.

After she married Rajeeb, who owned a painting by well-known Bangladeshi artist Zainul Abedin but did not consider himself a collector, the two began a transition toward contemporary art, one she describes as “an organic learning process through reading and traveling.” At first, they still felt comfortable with South Asian art. They bought paintings by Indian modernists, such as M. F. Husain and F. N. Souza, and then came a Rembrandt etching, currently hanging in their bedroom, followed by Picasso drawings and Salvador Dalí sculptures. But then, as they traveled more widely and began frequenting fairs and galleries, Nadia found herself drawn to living artists making art in our own era. “I can’t tell you when exactly I found myself looking at contemporary art, but I know it was a natural reaction to better connecting with what artists are saying today,” she says, exuding confidence in her choices. “If we are not at our offices, Rajeeb and I are either having dinner or seeing a show with a bunch of artist friends, just like how we started learning about contemporary art in the first place.”

Well immersed in the international art world, they have amassed works by a who’s who of contemporary artists over the past decade, with a fine balance between South Asian and global names, primarily from Asia and Europe. They have also shrewdly snapped up pieces by emerging stars, such as a semi-digital painting by the 33-year-old hot ticket Avery Singer. In the process, the Samdanis have made a name for themselves as prominent collectors—appearing on ARTnews’s Top 200 Collectors list—and as philanthropists, founding the Samdani Art Foundation and the Dhaka Art Summit.

The collection is a testimony to acquiring purely from personal connection with a work, which mainly stems from friendships they’ve cultivated with artists. The couple fetched Wilhelm Sasnal’s lush painting Untitled (The Kiss) during their visit to Warsaw for a re-staging of an exhibition from the fourth Dhaka Art Summit, A beast, a god, and a line, at the Museum of Modern Art there in 2018. The house’s most controversial piece, arguably, is Lost and Found, Pakistani artist Huma Mulji’s haunting human figure made out of buffalo hide. Originally in the entry gallery, it was moved to a more discreet location, reportedly upon requests from staff who were troubled by the sculpture’s eerie expression and decayed skin.

Their tastes are catholic, reaching across not only cultures but also styles, genders and generations. There are paintings by artists of the African diaspora, including the onetime Young British Artist Chris Ofili and Kenyan-born rising star Michael Armitage. Pioneering American feminist artist Lynda Benglis’s poetic sculpture Wing, made of painted folded-wire mesh, hangs above eye level, akin to a bird, perched over a romantic monochrome painting by the late Italian Ettore Spalletti in the living room. Art even peppers the rooftop, where the couple has been known to host gatherings that end with a few guests plunging into the pool: Inside the roof’s enclosed section, British icon Tracey Emin’s pink neon text declares, trust yourself.

The terrace, with Shilpa Gupta’s ‘Deep Below, the sky flows under our feet,’ 2014.  Asif Salman

The couple started their foundation in 2011 to foster visibility of Bangladeshi artists in and outside the country, and the following year launched the Dhaka Art Summit, a biannual intensive art and architecture extravaganza, which wrapped its fifth installment, Seismic Movements, in mid-February. Organized by Brussels- and Dhaka-based American curator Diana Campbell Betancourt, the nine-day affair—a compact version of global art-circuit events such as the Venice Biennale or the Sharjah Biennial—attracted international attendees as well as a local crowd. “We never have a problem with attendance here. Our people will always come to a music or dance performance,” says Nadia, proven right by the 476,000 summit visitors who came to see a group exhibition, free of charge, featuring some 500 artists, including Ellen Gallagher, Candice Lin, Héctor Zamora, Adrián Villar Rojas and Korakrit Arunanondchai. At each summit, the Samdani Art Award grants one local artist a residency at London’s Delfina Foundation.

Nadia says she and Rajeeb intended the summit to fill the need for institutionalization of modern and contemporary art in a city of 21 million. A nation that is not quite a half-century old, Bangladesh survived a painful separation from Pakistan in 1971, and support for the arts has been overlooked during the country’s revitalization efforts. Today, the Samdani Art Foundation seeks to make up for the absence of a dedicated modern art museum or art market. “It connects regional art practices in Asia with each other and with neighbors, while many borders are constantly being re-negotiated and remain conflicted,” says Indian artist Bharti Kher, whose mud-and-clay female figure Intermediaries, commissioned by the foundation, was on view outdoors during the summit.

The couple’s mission continues to grow with Srihatta, the foundation’s upcoming brick-and-mortar space for exhibitions and a residency program, plus a sculpture park, scheduled to open in 2021 in the northeastern city of Sylhet, hometown to both Samdanis. Designed by Bangladeshi architect Kashef Mahboob Chowdhury, the art center will open with a group exhibition organized by Campbell Betancourt, who also serves as the foundation’s artistic director and chief curator. Entitled Luminous Echo, the show will feature heavy hitters working with sound and light, such as Olafur Eliasson, Lucy Raven, Anthony McCall and Dominique Gonzalez-Foerster. Coming entirely from the foundation’s collection, the show is about “waves of light and sound movements that reside in our memories at different speeds,” says Campbell Betancourt, who also helps the couple rotate their collection in Golpo, as well as in the office and factory spaces of Golden Harvest, which includes food, real estate, technology, logistics and information holdings. “They are the dream art patrons for a curator to work with, because they love art and artists, but they’re not trying to be the curators.”

Haegue Yang’s ‘North of the Mountain,’ 2019, next to canvases by Murtaja Baseer and Mohammad Kibria.  Asif Salman

After 16 years of collecting, the couple say they still search for acquisitions the way they did the first day, based on an initial reaction to an artwork, regardless of whether it’s by an artist they’ve known and collected for years or a new discovery they cannot wait to learn about. They do not roam art fairs or galleries with a wish list. “Every time we go to Frieze or Art Basel, we say, ‘No shopping this time,’” Nadia says, adding with a laugh, “but that never happens.”